Toronto FC, with former Impact defender Laurent Ciman wearing red instead of blue, will renew its fierce rivalry with Montreal on July 13 at Stade Saputo. The two face off again Aug.
Jan 7, 2019 5:00 PM By: Canadian Press 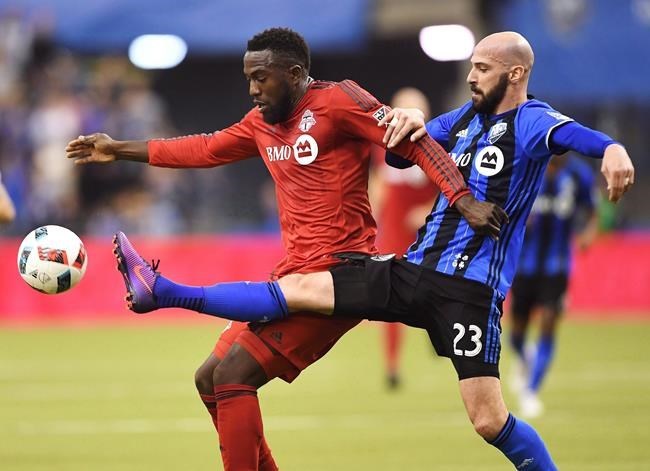 Toronto FC, with former Impact defender Laurent Ciman wearing red instead of blue, will renew its fierce rivalry with Montreal on July 13 at Stade Saputo.

MLS released its full 2019 season on Monday, boasting 24 teams with the addition of expansion FC Cincinnati and a streamlined playoff format.

The league had already released information on home and season openers and its post-season restructuring.

The regular seasons runs March 2 to Oct. 6 with the playoff set to start Oct. 19. Unlike last season, when the MLS Cup was Dec. 8, the 2019 campaign will culminate in a Nov. 10 championship game.

Each club will play 34 games (17 home and 17 away), facing conference opponents twice and non-conference foes once.

Electing not to play at Olympic Stadium during the cold weather, the Impact will play their first six games on the road before hosting Columbus on April 13.

Montreal will log some early-season miles, visiting San Jose, Houston, Orlando, Kansas City, New York and Washington D.C., before its home opener. Last year, the Impact played five of their first six on the road, a stretch that included a 1-0 victory over Toronto at Olympic stadium.

The Vancouver Whitecaps host Minnesota United while Toronto and Montreal open on the road — at Philadelphia and San Jose, respectively. Cincinnati opens the same day at Seattle.

Toronto's home opener at BMO Field is March 17 against the New England Revolution.

Vancouver hosts Toronto on May 31 and plays at Montreal on Aug. 28.

Toronto will have to wait until Aug. 17 to see former GM Tim Bezbatchenko, now president of Columbus Crew SC, in a road game. That same day, the Whitecaps host Wayne Rooney's D.C. United at BC Place.

All 24 teams will be in action Oct. 6 in the regular-season finale dubbed Decision Day. Vancouver hosts Real Salt Lake while Montreal entertains the Red Bulls and Columbus visits Toronto.

Toronto will get a jump start on the season via the CONCACAF Champions League. Greg Vanney's team plays Club Atletico Independiente in Panama on Feb. 19 with the second leg Feb. 26 at BMO Field.

TFC gets a Week 2 bye in MLS due to possible inclusion in the Champions League quarter-finals.

Fresh from undergoing a 4,000-seat expansion costing US$75 million, Portland's Providence Park reopens June 1 when the Timbers host Los Angeles Football Club. The Timbers have sold out 144 straight regular-season games since joining the league in 2011.

The construction means Portland will play its first 12 games on the road. But the Timbers will play 15 of their final 19 games at home including one stint of 10 straight. Portland will host Atlanta on Aug. 18 during that home run in a rematch of the 2018 MLS Cup.

The league will take a break June 14-21 during the opening week of the 2019 CONCACAF Gold Cup.

Fourteen of the league's 24 teams will qualify for the post-season, up from 12 in 2018. Only the two Conference leaders will get byes. The playoffs will be in the form of a fixed-bracket, single-elimination format.

Only one team per conference will be given a first-round bye, while the higher-seeded clubs will host all matches.

Toronto will play seven of its home matches on Saturdays, four on Sundays and three on both Wednesdays and Fridays. Vancouver's home schedule features 11 Saturday games plus three on Friday, two on Wednesday and one on Sunday.

Montreal will play nine home games on Saturday, four on Wednesday, three on Sunday and one on Friday.