TORONTO — Randal Grichuk was searching for solutions to his inconsistency at the plate when something finally sparked for him a few weeks ago.
Aug 13, 2019 10:23 PM By: Canadian Press 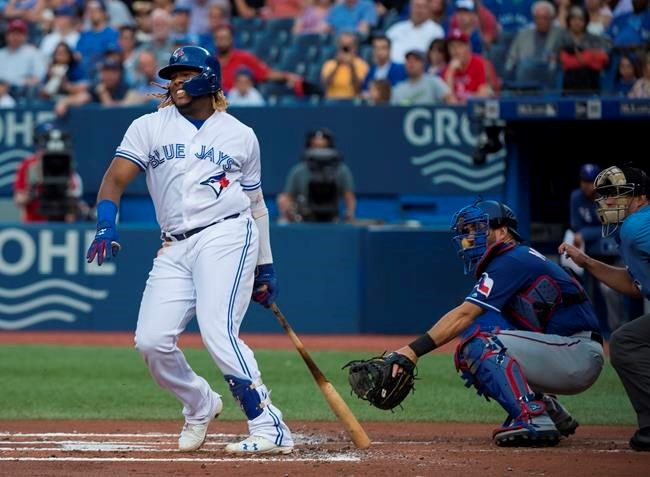 TORONTO — Randal Grichuk was searching for solutions to his inconsistency at the plate when something finally sparked for him a few weeks ago.

While he couldn't exactly put his finger on what that was, the Blue Jays outfielder is glad to be contributing to big team wins.

Grichuk, on his 28th birthday, homered for the second time in as many games to help Toronto topple the Texas Rangers 3-0 on Tuesday night.

"Honestly just going into the cages and feeling things out," Grichuk said of his offensive turnaround over the last two weeks. "I've been so inconsistent with pre-pitch, getting to the hitting spot ... just been trying to search for it and a few weeks ago now I found it.

"It could be gone tomorrow, but luckily I've been riding it out a few weeks ago consistently and I hope it stays for the rest of the season."

Grichuk hit his team-leading 22nd homer of the season — a deep drive to straightaway centre field — to put Toronto up 1-0 in the second inning, and Billy McKinney and Teoscar Hernandez hit back-to-back home runs in the sixth inning to pad Toronto's (51-72) lead.

It was the 11th time this season that Toronto had homered in consecutive at-bats — and second time in as many nights — tying a franchise record from 1999.

"I kinda changed the way I hold the bat, pre-pitch movements, some of my timing mechanisms and I felt like I've been able to be consistent with those the last 2 1/2 weeks," Grichuk said. "This game's kinda frustrating in the aspect of one day you have it and one day you don't. And for no reason at all you lost it.

"So I think I've been kinda battling to stay consistent at the plate with my stance, with my swing, with my pre-pitch movements and lately I've been able to be comfortable and consistent with those."

"He's locked in right now," Montoyo said. "He feels good at the plate, he's not chasing and he's one of those guys who when he gets hot he gets hot.

"And he's hot right now, he's having great at bats."

Danny Santana had a pair of doubles for the Rangers (59-60), supplying the visitors' only two hits through the game's first five innings.

"We've got to gather as a unit and figure out a way to solve this. This is a good hitters' park," said Texas manager Chris Woodward. "These guys aren't the Houston Astros. We need to do a better job of taking advantage of situations. "

Rangers starter Lance Lynn (14-8) gave up one run and four hits with three walks and a strikeout in five innings. It was the first time since April 23 that Lynn had pitched fewer than six innings in a start.

Wilmer Font served as the opener for Toronto, allowing one hit and two walks over his two innings of work.

Giles, making his first appearance since Aug. 7, earned his 16th save of the season.

"And then of course Pannone was really good, and Mayza, Law and Giles. It was good to see him out there and getting the save."

Rougned Odor continued to be booed loudly in each of his plate appearances. Toronto fans have loudly voiced their displeasure for the Texas second baseman since he punched former Blue Jays slugger Jose Bautista in the jaw during a 2016 game.

NOTES: Attendance was 22,958. ... The Blue Jays cap the three-game series with a matinee Wednesday. Right-hander Sean Reid-Foley will start for Toronto while the Rangers counter with lefty Kolby Allard.