The severe traumatic brain injury suffered by Canadian boxer Adonis Stevenson has pushed the subject of head trauma in combat sports back into the spotlight.
0
Dec 6, 2018 4:56 PM By: Canadian Press 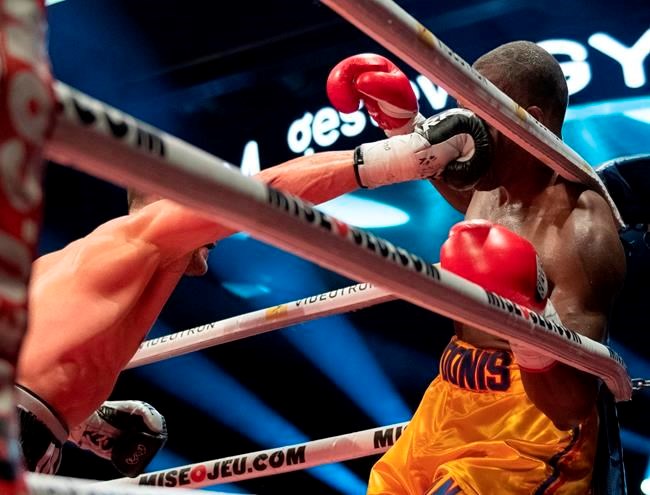 The severe traumatic brain injury suffered by Canadian boxer Adonis Stevenson has pushed the subject of head trauma in combat sports back into the spotlight.

There are no easy solutions in either boxing or mixed martial arts, where repeated blows to the head are the norm despite the potential for serious and long-term consequences. The head is a main target in both sports and fighters say they know the risks.

"It's dangerous but it's also something that the majority of us love the thrill, love the challenge, love the daring part of it," said former boxing champion Bernard Hopkins. "That's what makes us who we are."

Stevenson remained in stable but critical condition after a knockout loss last Saturday night in Quebec City. He dropped his WBC light heavyweight title to Oleksandr Gvozdyk of Ukraine.

The Montreal fighter underwent surgery to reduce bleeding in the brain and his prognosis remains uncertain. Doctors said that Stevenson is under mechanical ventilation, is sedated and requires specialized neurological monitoring.

The harsh reality of combat sports is that it is violent, often bloody, and at times, downright difficult to watch.

Stevenson was on the receiving end of two nasty flurries of punches late in the 11th round at the Videotron Centre. The final barrage included repeated head shots, with Stevenson's legs finally buckling after taking a stiff right hand while backed against the corner.

"Knowing that these blows are cumulative in their damaging effect, it just points to the huge risks of sports like mixed martial arts and boxing in general," said Dr. Charles Tator, a neurosurgery professor at University of Toronto and a director at the Canadian Concussion Centre.

Fighters do not use head protection at the professional level in MMA or boxing. Both sports have made adjustments over the years by changing things like glove size, fight length and the addition of doctors at ringside.

However, the head has remained unprotected and as a result, injury prevention efforts can only go so far. Hopkins said adding headgear would send his sport into decline.

"This is professional, I think we should keep it authentic as possible," he said. "Just have the right teaching and training of physicians that can immediately stop the fight when a fight needs to be stopped."

Chris Nowinski, a founder of the Concussion Legacy Foundation, said changing training techniques might help when it comes to combat sport.

"The No. 1 change would be to not have head blows in sparring," Nowinski said from Boston. "You can imagine that for some fighters, it could be that 90 per cent of their hits to the head are in sparring and not fights.

"That would be a dramatic change if the culture changed around allowing head impacts in sparring."

Hopkins, for one, dismissed the suggestion.

"You can't subtract punches in training or in a fight and not go for the head," he said during a promotional stop in Toronto. "It doesn't make sense. It becomes a body-punching match."

Some sports — notably football — have made changes to limit contact at practice while others have instituted concussion protocols.

"I think history shows that if you allow fighting, you're going to have catastrophic brain injuries," Nowinski said. "You might be able to do a bit to mitigate it but it's going to happen eventually no matter what we try to do to prevent it."

While the entire body can be more of a target in MMA, the head still takes a pounding. And it's not just with fists — blows can come via elbow, knee or a kick to the head.

In one notable fight at UFC 229 last October, Tony Ferguson landed 114 significant strikes to opponent Anthony Pettis over a bloody two-round fight. According to Fightmetric, Pettis took 66 shots to the head over the 10-minute span before stopping due to a broken hand.

Ferguson, meanwhile, absorbed 32 blows to the head from Pettis's 45 significant strikes. Both fighters looked like horror movie extras by the end, with their shorts and the mat riddled in blood.

Spectators at the Las Vegas arena lapped it up with broadcaster Joe Anik proudly proclaiming, 'Mixed martial arts!!" as the second round ended, just seconds after pointing out he'd been sprayed with blood while sitting in his cageside seat.

There is simply a demand for these violent sports. Whether that will change as fighters and the public learn more about the potential dangers remains to be seen.

"As we better understand the long-term effects of these impacts, I think the demand for these sports if they continue as they're going will diminish because it's hard to enjoy watching somebody get their brains bashed in," Nowinski said. "You might be thinking about how it affects their family in the future.

"But there still is further that we can go to reform the sports so I think we'll also see them get a little more humane as we go."

There may be changes down the road but it seems unlikely — at least at the moment — that the culture of boxing or MMA is ready for a revolution.

"We're in the business of hitting you in the head," Hopkins said. "My job when I was a fighter was to hit you anywhere that's legal to win, to break you down and submit you to my will.

"When it's a good fight, that means that the other guy has the same idea."

Raptors' Ujiri says conversations about racism can no longer be avoided
May 31, 2020 8:25 PM
MLS players agree to concessions to return to action at Orlando tournament
May 31, 2020 8:23 PM