CALGARY — Drew Doughty and Matthew Tkachuk lived up to the hype around their rivalry. Doughty scored the overtime winner for the Los Angeles Kings in a 4-3 win over the Calgary Flames on Tuesday.
0
Oct 9, 2019 12:06 AM By: Canadian Press 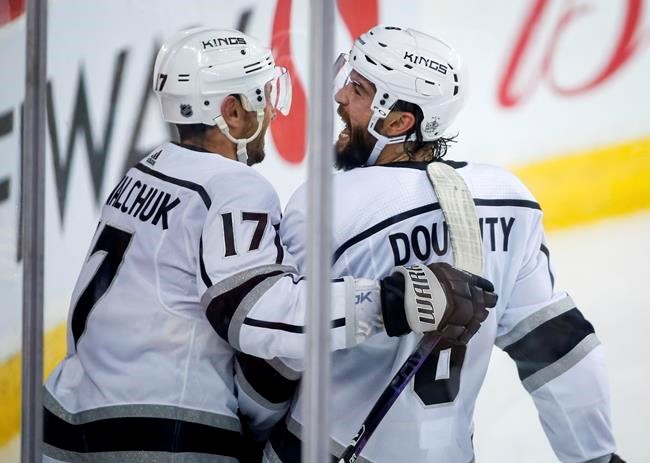 CALGARY — Drew Doughty and Matthew Tkachuk lived up to the hype around their rivalry.

Doughty scored the overtime winner for the Los Angeles Kings in a 4-3 win over the Calgary Flames on Tuesday.

Tkachuk scored twice, including the tying goal with 64 seconds left in regulation, and had an assist for Calgary.

The tension between Doughty and Tkachuk dates back to the latter elbowing the former in the face in 2017 during Tkachuk's rookie season.

The Flames winger and the Kings defenceman have taken the odd verbal jab at each other off ice in the media. The men bring out the competitor in the other on the ice.

Doughty said prior to Tuesday's game "I think we both know who the better player is."

The defenceman scored the power-play winner 50 seconds into overtime and assisted on the Kings' first goal of the game.

Tkachuk sparked a Calgary comeback scoring midway through the second period when the Flames trailed 3-0.

Doughty was more conciliatory in victory and downplayed the friction between the two players.

"You guys make a bigger deal of it than we do," Doughty told reporters. "He's just trying to play a good game.

"As much as he doesn't want to say it, he knows I'm a really good player and he's trying to get me off my game. But really, he's just feeding into my game.

"We're both good players. We just want to win games. That's it."

Said Tkachuk: "I’m excited for round two in two weeks in L.A."

"It was a tremendous effort, a great start in a tough building to play in," McLellan said. "They're a good team. They ended up in first last year in the division for a reason. They pushed back.

"We had some resolve to continue on and find a way to win it."

Tyler Toffoli had a goal and an assist with Sean Walker and Ilya Kovalchuk also scoring for the Kings. Jack Campbell posted 26 saves for the win.

Noah Hanifin had a goal for Calgary (1-1-1). David Rittich turned away 36 shots in the loss.

With Rittich pulled for an extra attacker, Tkachuk's second of the game pulled the Flames even. The 21-year-old tipped the puck into the air on a rebound and batted it by Campbell.

The Kings took a man advantage into overtime with Calgary's Sam Bennett serving a tripping minor.

Calgary trailed 3-0 midway through the second period when Tkachuk and Hanifin scored within a three-minute span.

Campbell squeezed his pads too late on a Hanifin backhand at 13:33 to pull the hosts within a goal.

Tkachuk scored off a broken play in the offensive zone beating Campbell low stick side at 10:51 of the second period.

Kovalchuk batted a rebound out of the air past Rittich at 3:46. The Kings' third goal was allowed to stand upon review.

The flat-footed Flames were outshot 20-3 in the opening period and failed to register a shot on net during a first-period power play.

"We got completely outplayed in the first," Tkachuk said. "It was almost like men against boys there."

Walker's sharp-angled wrister from the boards fooled Rittich at 17:26.

A scramble for a rebound off a Doughty shot squirted out to Toffoli, who beat Rittich glove side at 2:53.

The Saddledome booed Doughty whenever he had the puck.

The Flames gave their fans little to cheer about for half a game until Tkachuk's goal.

"The personal rivalry between the two . . . the intensity that both of them bring, when you buy a ticket you're going to watch those two closely," McLellan said.

"Nobody went home disappointed I'm sure with Tkachuk's or Doughty's performances tonight."

Atletico Ottawa unveils jersey, adding a dash of blue to familiar red and white
May 28, 2020 7:01 PM