After a crazy few months of being locked out of weight rooms, and scouring the neighbourhood for grass fields to train on, Andre De Grasse says he can handle any COVID-19 restrictions the Tokyo Olympics throw at him.
Apr 29, 2021 3:24 PM By: Canadian Press 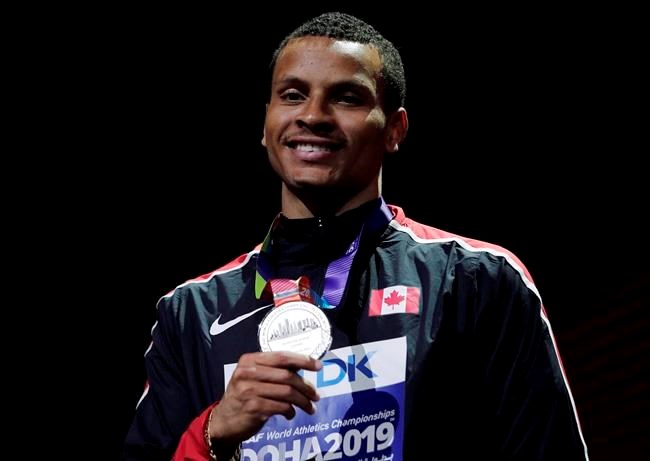 After a crazy few months of being locked out of weight rooms, and scouring the neighbourhood for grass fields to train on, Andre De Grasse says he can handle any COVID-19 restrictions the Tokyo Olympics throw at him.

A day after Tokyo organizers announced daily COVID-19 testing and other tight restrictions for athletes, the three-time Olympic medallist said the only choice is to roll with it.

"You've got to make the best of it," De Grasse said during his drive home from practice and treatment on Thursday. "Whatever they throw at us . . . things are going to be out of our control, but I'm going to try to manage it, and do the best that I can.

"Of course, it might not be the greatest experience in terms of being able to see the city of Tokyo, but I'm just there to hopefully win medals, make the best of that, and then go back home."

One medal in particular, however, could be out of reach. Canada's 4x100 relay team raced to bronze at the 2016 Rio Olympics, giving De Grasse his third medal of those Games. But because Canada's relay runners have been spread across Canada, the U.S. and the Caribbean over the past year, all with different COVID-19 travel restrictions, the team hasn't qualified for Tokyo.

Canada pulled out of this week's World Athletics Relays in Poland amid concerns about the pandemic -- another big blow in the quest to earn a spot on the starting line in Tokyo.

De Grasse believes they'll be there.

Canada's track and field team has battled huge challenges in qualifying for Tokyo, with numerous athletes travelling to the U.S. in recent weeks to train and compete due to looser restrictions there.

De Grasse, who lives in Jacksonville, Fla., spent the first several months of the pandemic locked out of his team's training facility. He and his training group ran on a soccer field, but were finally allowed back into the facilities at the University of North Florida in January, with certain restrictions, like mandatory masks in the weight room.

Despite the upheaval, De Grasse opened the outdoor season earlier this month with a fast 9.99 seconds in the 100 metres at the Tom Jones Memorial Invitational. Olympic silver medallist Justin Gatlin won in 9.98.

"I was hoping for something around like 10.1, 10.0, just to be able to see where I'm at. But I guess I had a little bit of extra motivation because I had Gatlin and Noah (Lyles, the reigning world 200 champion) in the race, plus being in front of a crowd kind of got me pumped up a little bit.

"I still wasn't expecting it, but I was close to Gatlin and knew he ran nine seconds the week before, so I thought it was probably going to be fast. I was pretty happy about it."

Gatlin will be among the Canadian's toughest competition in Tokyo. The 39-year-old became the oldest Olympian to win a non-relay sprint medal in Rio, and has said he plans to compete until at least the 2022 world championships in Eugene, Ore.

"He said he plans to run until the wheels fall off," De Grasse said with a laugh.

The sprint star also hopes to inspire Canadian kids to get out and run. This week he launched "Race With me!" an eight-week challenge he hopes will get kids feeling cooped up by COVID-19 restrictions off the couch and running.

"Trying to come up with ideas, how we can get people back doing some type of physical activity, so we came up with this challenge," De Grasse said.

The initiative challenges kids to run 400 metres, either on a track or on a stretch of road. De Grasse and other track athletes will offer tips along the way.

The challenge was the idea of Jesse Briscoe, a 14-year-old from Montreal. Briscoe was tired of sitting at home playing video games after his team sports were cancelled due to the pandemic, and so he and his dad reached out to De Grasse.

The timing is perfect, with many Canadian cities back in lockdown, gripped by the pandemic's third wave.

De Grasse said while "it sucks" that kids can't play team sports like basketball and soccer, he hopes "that running feeling helps satisfy them, because it's what I do for a living, it's what I love to do and kids love to run. So, this might bring some joy to them, to do this challenge."

And maybe, he added, it will unearth a future star who'll run for Canada one day.

Registration is free, although any donations will go to youth mental health initiatives such as Kids Help Phone.

De Grasse hadn't planned on being with the Canadian team at this week's World Athletics Relays in Poland. His partner Nia Ali, the reigning women's 100-hurdles champion from the U.S., is due in early May with their second baby. De Grasse and Ali have a daughter Yuri, while Ali has a son Titus from a previous relationship.

He does hope to compete in a couple of Diamond Leagues, depending on COVID-19 restrictions, on May 23 in Gateshead, England, and May 28 in Doha, Qatar.

This report by The Canadian Press was first published April 29, 2021.