GLENDALE, Ariz. — Darcy Kuemper's play in goal was the driving force in the Arizona Coyotes' run toward a playoff berth that came up just short late last season. His actions Saturday only further endeared the veteran to his teammates.
Nov 16, 2019 7:11 PM By: Canadian Press 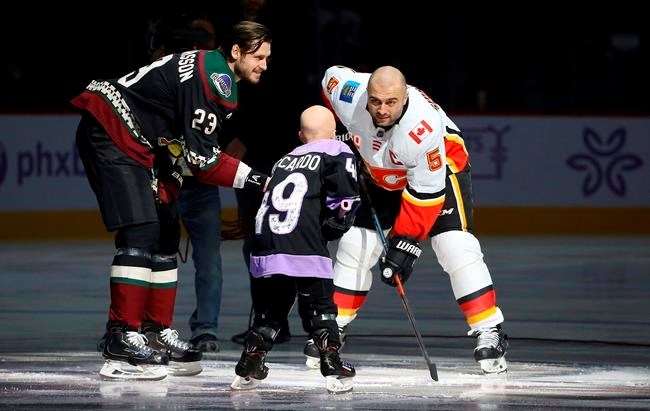 GLENDALE, Ariz. — Darcy Kuemper's play in goal was the driving force in the Arizona Coyotes' run toward a playoff berth that came up just short late last season.

His actions Saturday only further endeared the veteran to his teammates.

Kuemper stopped 37 shots for his second shutout of the season and slammed an opponent to the ice during a brawl in the second period, and the Coyotes beat the Calgary Flames 3-0 Saturday.

"It happens. A little bit of fun, but then we got back to work," Kuemper said. "That's a big part of our success, is how tight we are as a group. We want to have each other's back out there."

After Calgary’s Johnny Gaudreau cross-checked Arizona’s Jason Demers late in the second period while Demers was down on the ice, Kuemper put the Flames’ Matthew Tkachuk in a headlock and flipped him off his feet. Tkachuk came up swinging and landed a few blows on Kuemper in a dustup that also included Calgary goaltender David Rittich in from the other side of the rink.

"It's nice having my security guard back there, Darcy," Demers said. "We've been building towards something the last couple of years, and this season feels different for us."

Demers said he thought the Flames felt he went down too easy on a hit that preceded the fracas.

"Just trying to give it to him a bit, we didn't like that too much," Tkachuk said. "Whenever something happens when Johnny's involved, you've got to stick up for him."

Stepan was in the right spot to knock down Rittich’s clearance at 6:35 of the second period. The attempted pass up the ice hit Stepan in the wrist, and the puck came down to Stepan’s stick for a shot.

Stepan smiled sheepishly after his third goal of the season and first since Nov. 4 at Edmonton.

"It was kind of a gift. You're kind of just standing in a spot and you get a freebie," Stepan said.

Moments later, Soderberg scored off a pass from linemate Crouse. It was Soderberg's sixth goal of the season.

The Coyotes’ best scoring opportunity of the first period came when at the 11:31 mark. Crouse passed to Soderberg for a shot from close range, but the attempt to stuff the puck into the net was unsuccessful as Rittich blocked it.

"We had some good looks but just couldn't find (the net)," Flames coach Bill Peters said.

Crouse rolled in an empty-net goal with seven seconds to play to finish off the win.

"He was a beast out there," Coyotes coach Rick Tocchet said of Crouse.

NOTES: Flames D TJ Brodie was scratched two days after a fainting and seizure-like episode in practice that led to him being hospitalized. Brodie didn’t make the trip and remained in Calgary for rest and recovery. ... D Oliver Kylington, called up from AHL Stockton on Friday, started in Brodie’s place on the third line. ... Arizona began a stretch of seven of the next eight games against Pacific Division opponents. ... Kuemper and F Nick Schmaltz played in their 200th career NHL games.