After a promising start to the match, CF Montreal needed the help of goalkeeper Clement Diop to secure a 2-2 draw against Nashville SC on Saturday afternoon at Nissan Stadium.
Apr 24, 2021 8:22 PM By: Canadian Press 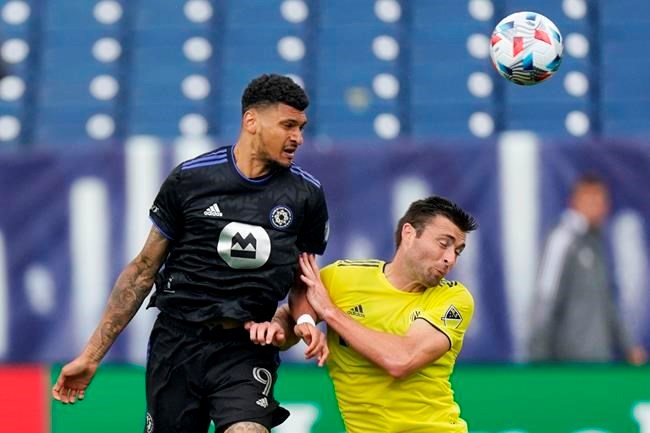 After a promising start to the match, CF Montreal needed the help of goalkeeper Clement Diop to secure a 2-2 draw against Nashville SC on Saturday afternoon at Nissan Stadium.

Mason Toye scored his second of the season and Zachary Brault-Guillard netted his first of the year in the first half, putting the ball past 'keeper Joe Willis.

Nashville’s Jhonder Cadiz and Hany Mukhtar scored in the second half on Diop, who was called upon more than once to preserve the point despite a left thigh injury sustained in the first half.

“He was top of his game,” said CF Montreal coach Wilfried Nancy of Diop. “And he was hurt. I spoke to him at halftime to see if he could continue, because he got a knock on his leg. He allowed the team to stay in this game. He had a good game.”

Nashville SC (0-0-2) directed 18 shots towards Diop’s net. Eight were on target, including six in the second half. CF Montreal (1-0-1) finished the game with four shots on target, three of which came in the first half.

“We knew this game would be difficult for us because this is a team that likes to attack with a lot of players inside the box,” said Nancy. “They know their strengths and they are good at that.

“It’s a good point for us, I have to be honest. Because they pushed a lot and we had a difficult moment between the 55th minute and 75th minute. Because we were not able to get the ball a little bit more.”

For the team’s second encounter of the season, Nancy made just one change to the starting 11 of last Saturday’s season-opening 4-2 victory over Toronto FC. He replaced Joel Waterman with Kiki Struna at the back.

Struna, Samuel Piette and Romelle Quioto were each shown a yellow card in the encounter.

Like last week against Toronto, CF Montreal dictated the pace of play from the opening whistle.

Nancy’s men missed two good opportunities in the game’s first five minutes before opening the scoring in the 13th minute of play. Toye netted his second of the season with a precise side-footed shot into the top right corner of the net.

Shortly after that, Nashville SC imposed their own rhythm in the attacking third. On two separate occasions, Diop was hurt following a Nashville build-up in the penalty area.

Montreal held onto its lead and doubled it in the 42nd minute through Brault-Guillard. His shot from the right flank deflected off defender Dave Romney’s back and ricocheted off the crossbar and in.

Except for a chance by Romell Quioto in the 47th minute, Nashville completely dominated the second half.

Less than 10 minutes after that wasted opportunity, the home team was back in the game thanks to Cadiz, who headed home a cross by Randall Leal in the 54th. Cadiz came close to adding two more goals in the following minutes.

That pressure paid off for Nashville when Mukhtar netted the equalizer in the 77th minute.

CF Montreal is back in action Saturday against the defending champions Columbus Crew.

This report by The Canadian Press was first published April 24, 2021.