TORONTO — T.J. Oshie and Tom Wilson scored, Braden Holtby made 30 saves and the Washington Capitals beat the Boston Bruins 2-1 in round-robin play Sunday to clinch the No.
Aug 9, 2020 10:18 PM By: Canadian Press 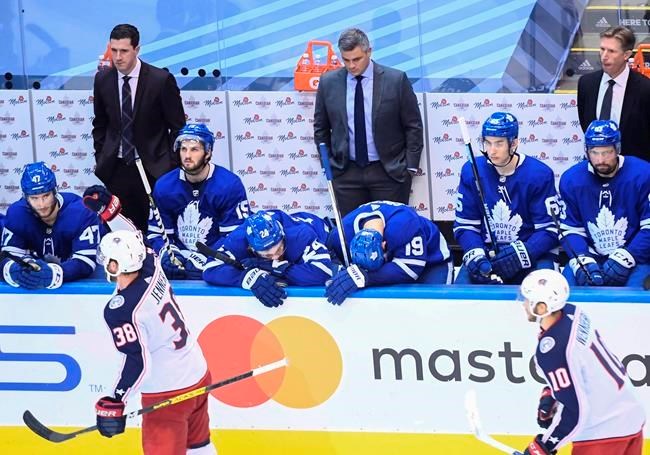 TORONTO — T.J. Oshie and Tom Wilson scored, Braden Holtby made 30 saves and the Washington Capitals beat the Boston Bruins 2-1 in round-robin play Sunday to clinch the No. 3 seed in the Eastern Conference and set up a first-round matchup against former coach Barry Trotz’s New York Islanders.

Boston, which won the Presidents’ Trophy as the top team during the NHL regular season that was cut short in March, lost all three of its seeding games and fell to fourth in the East. The Bruins will face the Carolina Hurricanes in the first round in a rematch of the 2019 East final.

Jake DeBrusk scored and Tuukka Rask made 23 saves for Boston, which also got an assist from winger Ondrej Kase in his round-robin debut.

EDMONTON, Alberta (AP) — Joe Pavelski tied it with 31.4 seconds left in the third period, Anton Khudobin stopped all three shots he faced in the shootout and Dallas beat St. Louis to clinch the No. 3 seed in the Western Conference.

Denis Gurianov scored the only goal of the shootout.

Dallas will face the Calgary Flames in the first round of the playoffs. Defending Stanley Cup champion St. Louis went winless in the round robin and will next face the Vancouver Canucks.

Khudobin made 12 saves in regulation and overtime for the Stars.

Blues backup Jake Allen stopped 18 of the 19 shots he faced in his first action of the NHL’s restart. Robert Thomas scored on the first shot of the game, and the Blues didn’t have another goal the rest of the way.

Joonas Korpisalo stopped 33 shots and Columbus advanced to the first round of the NHL playoffs with a win over Toronto in a decisive Game 5.

Zach Werenski’s floater from the left point in the first period held up as the deciding goal. Liam Foudy sneaked in a shot from a bad angle with 8:20 remaining, and captain Nick Foligno sealed the victory by scoring into an open net with 23 seconds remaining.

The Maple Leafs ran out of with captain John Tavares misfiring by hitting the post while facing a wide-open side in the first period. And Toronto ran out of remarkable comebacks two nights after rallying from a three-goal third-period deficit in a 4-3 overtime win in Game 4.

Frederik Andersen stopped 19 shots, and was caught cheating to his right in giving up Foudy’s goal from a bad angle.

Columbus, which rallied from a three-goal second period deficit in a 4-3 OT win in Game 3, advances to the first round, where it will meet the second-seeded Tampa Bay Lightning in a rematch of last year’s first-round series.