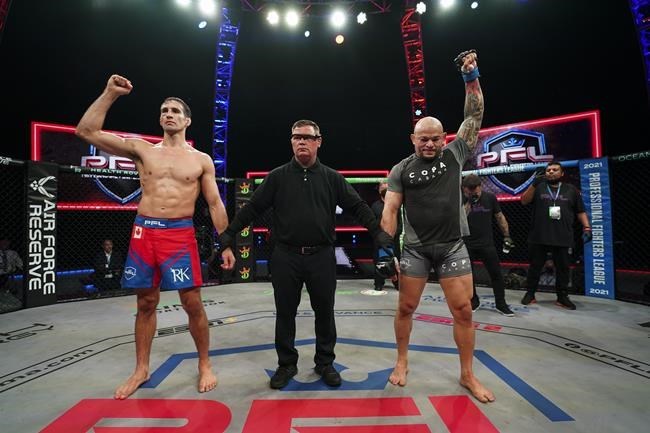 The judges scored the bout 29-28, 28-29, 29-28 for Tibau, who was outstruck 81-32 over the three rounds. MacDonald just shook his head when the decision was announced and walked away while Tibau celebrated.

"I think it was a clear robbery," MacDonald said after the fight, "I thought I was dominant in this fight. It was a hard fight. Gleison brought it. And respect to him. But I believe I clearly won that fight and I think that this should be looked into."

MacDonald said he was "totally sure" he had won the fight while he waited for the judges scorecards to be read out.

"I was so surprised when the first judge they announced scored it for him," MacDonald said. "I was shocked. But when I heard the split decision, I was blown away. What do you say? I didn't see it that way at all."

He said fighters should be able to "fight and rest easy that we have competent, fair, truthful judging in our sport."

Until the decision, it had seemed a straightforward evening for MacDonald (22-7-1). Tibau (36-15-0) showed his toughness but MacDonald was bigger, faster and had more weapons.

Asked about the controversy, PFL president Ray Sefo noted the judges were chosen by the local commission. And while he agreed the fighters shouldn't "have to worry about certain things," he also said they run a risk when they leave matters in the hands of the judges.

Asked how he felt as he waited for the decision, Tibau said fighters are always nervous when tough fights go to a decision.

The fight at the Ocean Casino Resort was the second for MacDonald in the Professional Fighters League. The 31-year-old mixed martial artist from Kelowna, B.C., who now makes his home in Montreal, submitted (Curious) Curtis Millender in the first round at PFL 2 on April 29.

The PFL, formerly known as the World Series of Fighting, works on a set schedule unlike other MMA promotions. It features a regular season and playoffs with a US$1 million prize going to each champion.

The top four fighters in the 170-pound division advance to the playoffs. MacDonald had already booked his spot and would have clinched the top playoff seed with the win. Instead he dropped to the second seed.

MacDonald, a former Bellator welterweight champion and UFC contender, had a four-inch height and eight-inch reach advantage over Tibau.

He used that edge, striking and then moving out of range. The bout was paused midway through the first round when Tibau suffered an inadvertent eye poke but the Brazilian continued.

Tibau stuffed a takedown and started swinging. MacDonald weathered the brief storm and managed to get into position to take Tibau's back as the round ended.

MacDonald took Tibau down to start the second round. The Brazilian got back up and they clinched at the fence before Tibau pushed the Canadian away. MacDonald scored with kicks.

Tibau suffered another eye poke in the third. The Brazilian kept coming at MacDonald but had trouble catching him or doing damage.

MacDonald has now lost two of his last three fights. He lost his Bellator title to Douglas (The Phenom) Lima in October 2019 before switching to the PFL.

In other welterweight action Thursday, Magomedkerimov choked out Millender in the first round and Sweden's Sadibou Sy won a decision over Russia's Aleksei Kunchenko.

MacDonald and Cooper had been leading the PFL welterweight standings with six points after their first bout. But Cooper missed weight this time, coming in at 171.8 pounds, and was docked a point.

MacDonald made short work of Millender, taking him down and then securing a rear-naked choke that caused a tap three minutes 38 seconds into the bout. The fighters landed a total of just seven strikes, five of which were by MacDonald on the ground.

The 37-year-old Tibau lost a decision to Zeferino on the same card.

Cooper needed just 83 seconds to submit France's Jason Ponet in his first fight of the season.

MacDonald, signed with the PFL in December 2019 but had to wait for his debut after the promotion cancelled its 2020 season due to the pandemic.

The PFL features six divisions each with 10 fighters, who each fight twice during the regular season. Fighters earn performance-based points, with three points for a win, plus bonus points for knockouts and submissions.

The top four in each weight class advance to the playoffs, seeded based on their point totals.

This report by The Canadian Press was first published June 17, 2021