The Canadian men's soccer team will join the Raptors and Blue Jays in Florida next month.
Feb 23, 2021 3:37 PM By: Canadian Press 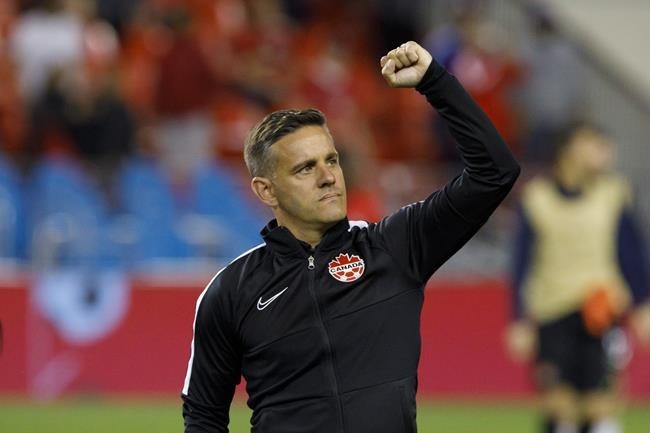 The Canadian men's soccer team will join the Raptors and Blue Jays in Florida next month.

Canada Soccer announced Tuesday that Canada, ranked 73rd in the world, will shift its first home game in World Cup qualifying to Orlando's Exploria Stadium — on March 25 against No. 169 Bermuda — due to pandemic-related travel restrictions.

The game will be considered a home match in a neutral venue. There will be no fans allowed in the stands.

After facing Bermuda, Canada has two away matches — March 28 at the 193rd-ranked Cayman Islands and June 5 at No. 200 Aruba.

Canada's other home game in the first qualifying round is June 8 against No. 141 Suriname.

Peter Montopoli, general secretary of the Canadian Soccer Association, said no decision has been made yet on the site for the Suriname matchup.

"We're going to continue to work with our provincial and Public Health Canada authorities for the best venue for us for June," he said in an interview. "No decisions have been made.

"But it's a changing landscape. We certainly want to play in Canada and we'll do our best to be playing in Canada."

The Orlando stadium is currently hosting the SheBelieves Cup, which features the Canadian women and three other teams including the U.S.

Montopoli said the Canadian women's experience in Orlando and CONCACAF's positive view of the venue and its COVID-19 protocols had prompted Canada Soccer to choose it.

The Canadian men played at Exploria Stadium in November 2019, losing 4-1 to the U.S. in CONCACAF Nations League play. The stadium is home to Orlando City SC of MLS and the NWSL's Orlando Pride.

Toronto FC is also looking at shifting its base of operations to Florida, with Orlando a possible site at least for the start of the MLS season, which kicks off April 17.

The Toronto Raptors are playing home games in Tampa this season, while the Blue Jays are starting their season with home games in Dunedin.

Canada is one of 30 CONCACAF nations, divided into six groups for the first round of World Cup qualifying in the region covering North and Central America and the Caribbean. The group winners advance to a round of head-to-head knockout matches with the three victors joining No. 9 Mexico, the 22nd-ranked Americans, No. 47 Jamaica, No. 50 Costa Rica and No. 64 Honduras in the final round

The top three teams from the eight-team final qualifying round-robin round will qualify directly to the 2022 World Cup in Qatar. The fourth-place team qualifies for a FIFA intercontinental playoff.

The Canadian men, who are co-hosting the 2026 World Cup along with Mexico and the U.S., have only ever qualified for one World Cup — 1986 in Mexico where they exited after failing to score in losses to France, Hungary and the Soviet Union.

This report by The Canadian Press was first published Feb. 23, 2021