Canada's long-track speedskating team is chasing ice to Fort St. John, B.C. The country's top speedskaters have been without ice in Calgary's Olympic Oval since early September because of a mechanical failure.
Oct 28, 2020 3:29 PM By: Canadian Press 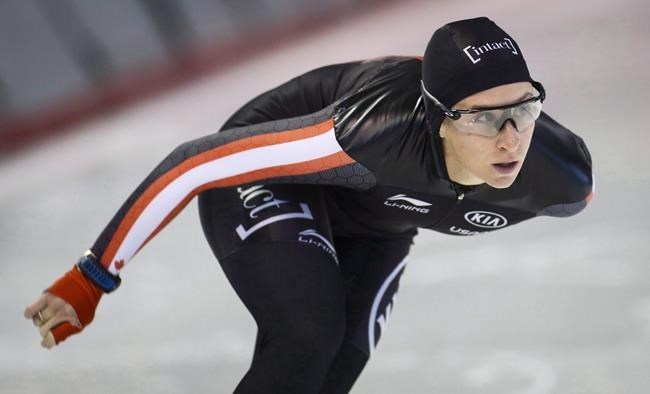 The country's top speedskaters have been without ice in Calgary's Olympic Oval since early September because of a mechanical failure.

"I'm super-thankful that Fort St. John and their community is allowing us to do this," said Fish, who holds the world record in the men's 10,000 metres.

The team will operate with restrictions to avoid the spread of the COVID-19 virus.

Skaters and staff will travel by vehicle, and they'll be tested before and after their arrival, Speed Skating Canada chief executive officer Susan Auch said.

They'll wear masks on the ice if they can't ensure distance with their teammates.

"They won't be going out for dinner," Auch said. "They might go for a jog outside. They're going to minimize any community interaction."

If training camp is successful, Auch says the national team could return to Fort St. John's again later this winter.

“This is a tremendous opportunity to host the country’s top speed skaters and showcase our community while injecting some much-needed tourism dollars into the community," Fort St. John mayor Lori Ackerman said in a statement.

"We have worked with Speed Skating Canada to ensure they have the training times they need on the oval, without reducing the ice availability for local users.”

Fish, Blondin and teammates have been in-line skating on the Calgary oval's concrete floor or short-track speedskating at another facility for substitute training since the oval's ice plant shut down Sept. 5.

Not only is their international season delayed until 2021 because of the pandemic, but access to ice for long-track training was cut off.

Ice isn't expected to be restored in the 1988 Winter Olympic Games venue before January, which is just over a year out from the 2022 Winter Olympics in Beijing.

Blondin, the reigning world champion in the women's mass start, says some of her international competitors are training and competing in domestic races. She doesn't want to fall behind.

"Definitely anxious," she said. "The European countries, yes the cases are rising there. They haven't been impacted as much as we have as Canadians for training.

"They're still training together like normal, they're in the gym together, they're not wearing masks. They're able to go on ice and compete in Saturday-morning races.

"It's really, really unfortunate the Olympic Oval here in Calgary had to shut down due to mechanical failure."

"We are wholly dependent on an external organization to fix the issue for us," he said.

The 10-year-old Pomeroy Sport Centre in Fort St. John features one of only four covered speedskating ovals in North America, plus a pair of hockey rinks.

When temperatures were too warm for Prince George, B.C., to hold speedskating on that city's outdoor oval during the 2015 Canada Winter Games, the races were held in Fort St. John.

Fish, 23, won a silver medal in the 5k and a bronze in team pursuit then.

"The ice is not as fast as it is here in Calgary, but it does the same thing," Fish said. "It's a nice oval and I'm pretty excited to get the long-track blades on again.

"It's super-important. You need to get that feeling back in your skates in long track. For me especially it takes me a bit longer than most to kind of feel the ice."

Canada's short-track speedskating team has been forced out of its Montreal national training centre because of the rising number of COVID-19 cases in Quebec.

The provincial government extended a ban on organized sports or recreational activities in "red zones" until Nov. 23 earlier this week.

Olympic-sized rinks that provide space for protective crash pads are required, said Auch. The CEO is working on alternate site outside Quebec.

"It's a tough situation there," Auch said. "We are working on a training camp and I think we're close."

"The short-trackers haven't been off ice as the long-trackers. We're in a little less of a crisis, but we want to get them back on ice shortly."

This report by The Canadian Press was first published Oct. 28, 2022.

Tokyo Games won't confirm added costs reported at $3 billion
Nov 30, 2020 3:10 AM
Montrealer Nathan Cayo scores 18, Richmond upsets 10th-ranked Kentucky
Nov 29, 2020 8:17 PM
Hall of Fame broadcaster Vin Scully turns 93
Nov 29, 2020 8:13 PM
Comments
We welcome your feedback and encourage you to share your thoughts. We ask that you be respectful of others and their points of view, refrain from personal attacks and stay on topic. To learn about our commenting policies and how we moderate, please read our Community Guidelines.