SYDNEY, N.S. — Team Canada's Jennifer Jones did not look like a six-time Scotties Tournament of Hearts champion during the preliminary round at Centre 200. The arrival of the championship round Thursday afternoon appeared to change things.
Feb 21, 2019 9:16 PM By: Canadian Press 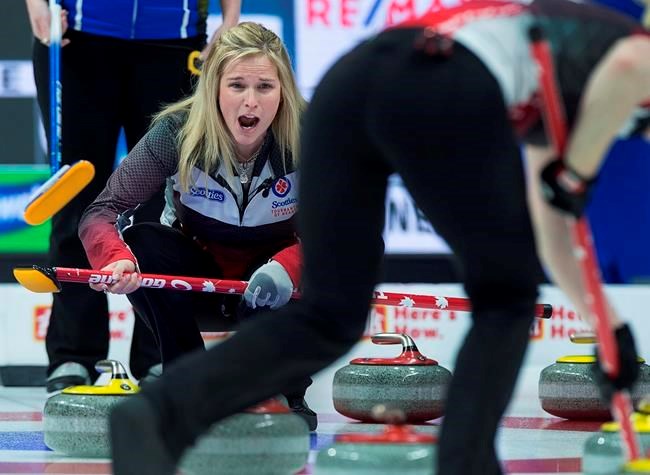 SYDNEY, N.S. — Team Canada's Jennifer Jones did not look like a six-time Scotties Tournament of Hearts champion during the preliminary round at Centre 200.

The arrival of the championship round Thursday afternoon appeared to change things.

With a delicate tapback for three in the seventh end, vintage Jones had returned and she carried it through a 10-8 win over Alberta's Chelsea Carey.

After a week of near-misses, feather ticks and so-so play, Jones looked sparked.

The slumping body language was gone. High-fives with teammates Kaitlyn Lawes, Jocelyn Peterman and Dawn McEwen were firmer. The smiles were back.

Her team stole a pair in the eighth end and Jones closed it out with a confident hit in the 10th to hand Carey her first loss of the competition.

"Honestly I've felt like I've thrown a lot of good rocks and they just haven't worked out," Jones said. "My draw to the button pre-game picks. It just felt like one of those weeks where everything that could go against us did.

"To make that big three — and it was a tough shot — the girls swept it great. That was a big turning point."

Jones improved to 5-3 in the opening draw for the eight teams who made the cut for the championship round with the win over Carey. But she still has her work cut out for her moving forward after falling 9-6 to Ontario's Rachel Homan in Thursday's evening draw.

Carey, the 2016 Scotties champion, fell to 7-2 overall with back-to-back losses on Thursday, including a 10-6 defeat against P.E.I.'s Suzanne Birt.

"We know we're going to get a loss," she said. "It's kind of good to get it over with," Carey said after the Jones draw.

Saskatchewan's Robyn Silvernagle posted an 11-5 victory over Northern Ontario's Krista McCarville, British Columbia's Sarah Wark stole a point in the 10th end for a 9-8 win over Birt and Homan defeated Team Wild Card's Casey Scheidegger 9-2 to round out the afternoon draws.

Silvernagle and Homan are tied with Carey atop the standings with 7-2 records. Scheidegger, Birt and McCarville are second at 6-3.

"We've got a ton of tough games ahead so we've got to keep putting the pedal down," Homan said.

Wark eliminated Manitoba's Tracy Fleury earlier in the day in a tiebreaker. She's at 5-4 alongside Jones at the bottom of the standings after being toppled 8-6 by Silvernagle in evening play.

Preliminary round records carried over into the championship round, which runs through Friday night.

The top four teams will qualify for the Page Playoffs starting Saturday. The semifinal and final will be played Sunday.

Jones is looking to set a record with a seventh Scotties title as a skip. She shares the current mark with Colleen Jones.

The winning team will represent Canada at the March 16-24 world women's curling championship in Silkeborg, Denmark.

Notes: After the afternoon draw, several players complained about the potent scent of grilled hamburgers that wafted into the ice area. A security official said some smoke had circulated through parts of the building due to BBQ use near an arena exit. On Wednesday night, a different odour hung in the air at ice level. An arena official said that smell was due to stagnant water in the facility's laundry room.