B.C. skip Wark an unexpected qualifier for championship round at Scotties 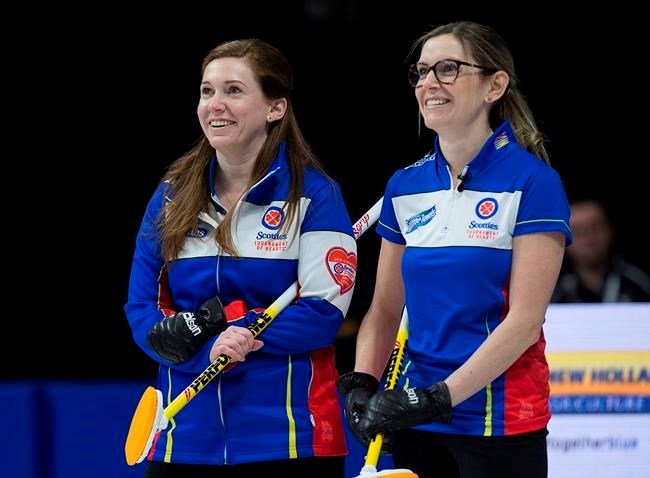 You wouldn't know it by Wark's debut performance at the Scotties Tournament of Hearts.

She has embraced the big stage this week and unexpectedly made the championship round to boot.

"I love it, it's nice to go in feeling the crowd, the emotions, being on camera and everything like that," Wark said. "It drives me a little bit and it just brings out a nice level of competence that I don't always have."

B.C. made the eight-team cut at Centre 200 on Thursday morning with an 8-5 upset win over Manitoba's Tracy Fleury in a tiebreaker game.

"We felt really good about the way that we played the game and felt like we deserved to win," Wark said.

The numbers back that up. Wark led all players with a shooting percentage of 90 per cent, well ahead of Fleury at 66 per cent.

A pair of three-point steals sealed Fleury's fate. Wark kept the pressure on throughout the game and made Fleury pay when she missed.

"That's huge for us," Wark said. "If you would have told us at the beginning of the week that we would be playing a tiebreaker for a spot in the championship round, we would have been thrilled."

Fleury was expected to be in the playoff mix after topping a strong field in the Manitoba playdowns. But she never seemed to really get on track this week and made costly mistakes at the wrong time.

"We thought we would be a contender, but sometimes you just don't have it," Fleury said.

Wark opened the competition with three straight wins before losing one-point games to Alberta and Northern Ontario. Her only other defeat in the preliminary round was an 8-6 decision against Ontario.

Pretty impressive stuff from the 24th-ranked team in the country.

"I think it says a lot about the fight we have in us," Wark said.

Wark got a chance to play some higher-ranked teams at the Red Deer Curling Classic last fall and she won bonspiels in Abbotsford and Kamloops before taking the B.C. title.

She has played with lead Jen Rusnell the last three years while third Kristen Pilote and Carley Sandwith came on board this season. They all played a busier schedule and it has paid off.

British Columbia downed Birt 9-8 in the championship round opener before falling 8-6 against Silvernagle in the evening draw to stand at 5-4.

"Growing up it's always been my goal and I always expected to be here eventually," said Wark, who turned 33 this week. "I worked really hard for it and I wasn't surprised when I did get here. Process-wise, I have a lot to learn and build on.

"I'm taking this as just a huge learning experience. I'm trying to take in everything I can."

Pilote and Rusnell debuted at the Scotties in 2015 with skip Patti Knezevic. This is also the second career nationals appearance for Sandwith, who played with Kesa Van Osch in 2014.

"I don't want this to be a one-time curling experience," Wark said. "I want to make a curling career out of it. I need to learn lots now, take it all in and just continue it in the years to come."