Armia, Perry lead the way as Canadiens down Jets 5-1 to take 3-0 series stranglehold 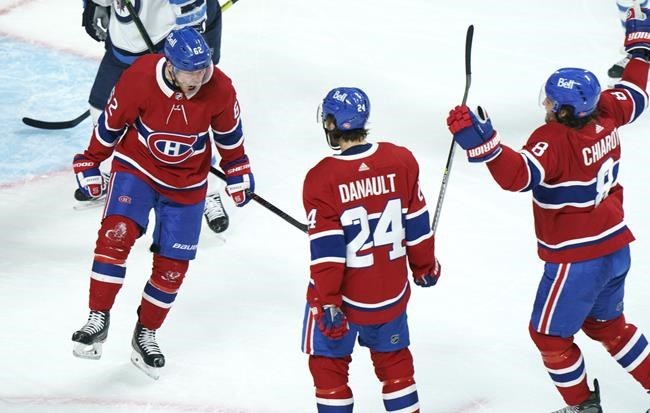 MONTREAL — Joel Armia, Corey Perry and Eric Staal are listed on the Canadiens' locker-room whiteboard as the fourth line.

The trio isn't playing anything like it this post-season — and are a big reason why Montreal somewhat improbably sits one win from semifinals of the Stanley Cup playoffs.

Armia had two goals as part of a three-point night, Perry opened the scoring at the end of a grinding shift, and the Canadiens defeated the Winnipeg Jets 5-1 on Sunday to take a 3-0 lead in their second-round series.

"They know what they are as a line and they just play to their strengths. Playoff hockey has certainly brought the best out of the three of them."

Artturi Lehkonen and Nick Suzuki also scored for the Canadiens, while Carey Price made 26 saves in another solid outing.

After storming back from a 3-1 deficit to stun the heavily favoured Toronto Maple Leafs in the opening round, the North Division's fourth seed can seal this best-of-seven matchup Monday back at the Bell Centre.

"We know the feeling of having your back against the wall," said Suzuki, whose team has won six straight post-season contests and hasn't trailed since Game 4 against Toronto. "We know they're going to be coming out with a lot of intensity."

Adam Lowry replied for the Jets, who got 28 stops from Connor Hellebuyck. Having swept Connor McDavid's Edmonton Oilers in the first round, Winnipeg will simply be looking to force a Game 5 on Wednesday at Bell MTS Place.

"You've got to keep believing," Jets captain Blake Wheeler said. "There's some things in our game that we really like, some things we can clean up certainly, and hopefully we get a bounce to go our way.

"Hopefully one goes off of one of their sticks and ricochets into the net and we'll take a lead and see how it looks from there."

Montreal welcomed another 2,500 towel-waving fans on a steamy spring evening after hosting the first NHL crowd in Canada during the COVID-19 pandemic for Game 6 against Toronto.

With No. 1 centre Mark Scheifele serving a four-game suspension for charging on Jake Evans in the opener, the Jets got Paul Stastny back after he missed the first two contests with an undisclosed injury.

Montreal, meanwhile, lost defenceman Jeff Petry to an upper-body injury after appearing to get his right hand caught in one of the camera holes along the glass, but interim head coach Dominique Ducharme didn't have an update post-game.

The Canadiens opened the scoring at 4:45 of the first period when Perry, Armia and Staal went to work. Caught in the middle of a change, the Jets were hemmed into their own end for 30 seconds before Perry's shot went off Winnipeg defenceman Jordie Benn's stick and past Hellebuyck for the veteran winger's third of the post-season.

"They bring a physical dimension," Ducharme said of his so-called fourth line. "Their offensive presence make them hard to play against."

A Stanley Cup champion and Hart Trophy winner, the 36-year-old Perry signed with Montreal for the league minimum right before training camp.

"He's been amazing," Suzuki said. "He's always been a winner and we can feed off that, learn from him."

And Staal, also 36 and a Cup champ, now has eight points in 10 playoff outings after putting up just three in 21 contests following the trade that brought him over from the Buffalo Sabres.

"They've played a lot of games," Armia, 28, said of his linemates. "I just have to listen and learn."

Price, who blanked the Jets 1-0 in Game 2 for his eighth career playoff shutout, continued to keep things in check at the other end once the visitors started to get going midway through the period with nice saves on Andrew Copp and Wheeler.

"He's unbelievable," Armia said of his goaltender. "It's just a different kind of confidence you get in the games when you know that you can trust the guy in the net."

Winnipeg came close to getting even a couple of times later in the period, but Price was twice bailed out by his crossbar on shots from Nikolaj Ehlers and Wheeler.

The home side pushed back and got a greasy goal at 9:24 to make it 2-0 when Lehkonen banged home his first on a scramble.

The Jets went to the power play, but Armia intercepted Stastny's pass and broke the other way on a 2 on 1 before toe-dragging a shot that deflected off a sliding Josh Morrissey for his third — and Montreal's third short-handed goal of the playoffs — at 13:41 inside an electric Bell Centre that sounded like a lot more than 2,500 people.

Lowry broke Price's shutout streak at 99 minutes 33 seconds with 2:09 left in the period when he took a pass from Mathieu Perreault for his second.

But the Canadiens iced it on a power play at 8:52 of the third when Cole Caufield found Suzuki to bury his fourth.

Armia, a former Jets forward, added his second of the evening into an empty net with Montreal also killing a penalty with 3:18 left as the familiar chants of "Ole! Ole! Ole!" echoed around the Bell Centre.

The Canadiens, who saluted their fans following the final buzzer, have not trailed for 376:14 of game action — the fifth-longest stretch by any team in playoff history.

The Jets, meanwhile, face the daunting task of trying to become just the fifth NHL club to come back from a 3-0 deficit.

"I've been in this league long enough, played in enough playoff series, to know the hardest game to win is the last one," Gallagher said. "They're not going to go down without a fight.

"We know how difficult this is going to be."

Notes: Canadiens great Guy Lafleur, who is battling lung cancer, was in attendance and got a rousing ovation from the crowd. ... The federal government announced Sunday it will issue a travel exemption to allow the North Division winner and an American counterpart to cross the border during the third round of the playoffs and, if necessary, the Stanley Cup final.

This report by The Canadian Press was first published June 6, 2021.