Not that they needed a reminder that they're a long way from home, but Toronto FC players had an alligator crash their practice in Florida on Monday.
Apr 26, 2021 6:18 PM By: Canadian Press 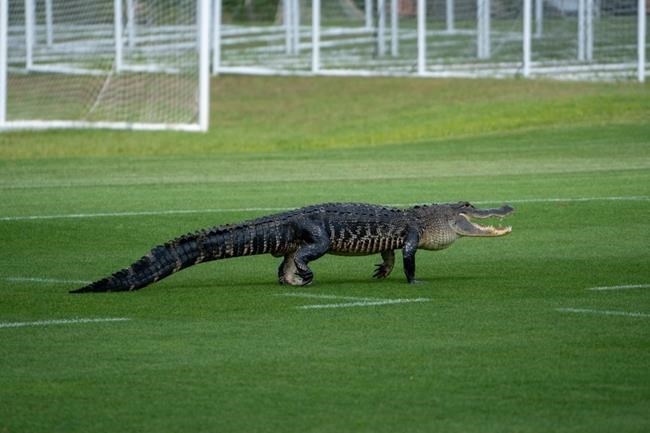 Not that they needed a reminder that they're a long way from home, but Toronto FC players had an alligator crash their practice in Florida on Monday.

"All I can tell you is this — there was an alligator, a massive alligator," Toronto coach Chris Armas said. "And my players are running towards the alligator as I went the other way. Listen we talk about fearless and aggressive round here, but I thought we would not think about that at that moment.

"It's maybe par for the course here in Florida, when you're by the water, but I think it was cool for the guys to see really up-close and personal. It was kind of a cool way to start training."

On Monday, the club posted a photo of striker Jozy Altidore observing the alligator from a safe distance as it wandered past someone in a nearby golf cart.

TFC, which is based out of Orlando due to pandemic-related travel restrictions, will welcome a different kind of foe Tuesday when Mexico's Cruz Azul comes to visit in the first leg of their Scotiabank CONCACAF Champions League quarterfinal.

The game is to be held behind closed doors at Tampa's Raymond James Stadium, home to the Super Bowl Champion Tampa Bay Buccaneers. The second leg is scheduled for May 4 at Mexico City's historic Azteca Stadium.

Cruz Azul (13-2-1) tops the Liga MX standings and is coming off a 3-2 win Saturday over Atletico San Luis. After losing the first two games of the season by 1-0 scores, it has gone unbeaten in 16 games (14-0-2) in all competitions.

"We do know it will be about field position — and understanding where they want to play the game and how they get there. So easier said than done but we think we have a good understanding of what we'll be up against. It's really about us and executing now."

Toronto, in contrast, has garnered just one point from its first two games of the MLS regular season, losing 4-2 to CF Montreal and tying Vancouver 2-2.

Toronto dispatched Mexico's Club Leon 3-2 on aggregate in the round of 16 of CONCACAF's flagship club competition, tying 1-1 in Leon and then winning 2-1 in Florida despite an injury-riddled roster.

Cruz Azul downed Arcahaie FC 8-0 on aggregate in its round-of-16 tie, bouncing back from a scoreless first leg to thump the Haitian side in the rematch at Azteca. Seven different Cruz Azul players scored against Arcahaie, which had beaten CPL champion Forge FC in the CONCACAF League feeder competition.

Toronto will face the Mexican side without Spanish playmaker Alejandro Pozuelo, who remains sidelined with a right thigh issue.

"Not quite there," Armas said of the designated player, who was due to undergo some imaging Monday.

The good news is French centre back Chris Mavinga is back training after a calf issue that has kept him out of action to date. Armas said the club would be prudent in not rushing him back, however.

Toronto's Michael Bradley, Mark Delgado and Ralph Priso go into the match on yellow cards, meaning they will miss the second leg if they get another.

CRUZ AZUL HISTORY: The Mexican side is 6-4-1 against MLS opposition in Champions League play. But its first ever defeat against MLS opposition was a 2-1 loss in Toronto in the 2010-11 group stage. The teams subsequently tied 0-0 in Mexico City. In 2020, it lost 2-1 to Los Angeles FC in a single-game quarterfinal.

TFC HISTORY: Toronto is 5-7-5 against Mexican opposition in the Champions League. In 2018, Toronto ousted both Tigres UANL and Club America before falling to Chivas Guadalajara in the final on a penalty shootout.

This report by The Canadian Press was first published Aril 26, 2021