TORONTO — The Toronto Maple Leafs liked a lot of elements in their game Thursday. Unfortunately the end result wasn't among those positives.
Feb 21, 2019 10:20 PM By: Canadian Press 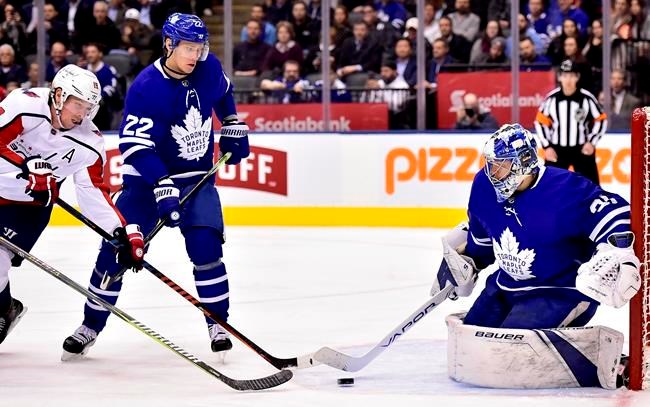 TORONTO — The Toronto Maple Leafs liked a lot of elements in their game Thursday.

Unfortunately the end result wasn't among those positives.

Alex Ovechkin scored the 650th goal of his career and Braden Holtby made 40 saves as the Washington Capitals picked up a 3-2 victory that sent Toronto to a third straight defeat.

The Leafs had a number of grade-A chances in a first period where they directed 21 shots towards goal, but were unable to a break through before the visitors found the back of the net twice in the second.

"We did some good things, but at times we didn't sustain some of the momentum," said Toronto centre John Tavares, who buried his 34th goal of the season. "You're playing a pretty good hockey team, but we've got to find a way."

Tom Wilson, with a goal and an assist, and Brett Connolly also scored for Washington (34-20-7), which won consecutive games for the first time in two weeks. Lars Eller added a pair of assists.

"(Holtby) was unstoppable," said Ovechkin, the 14th player in NHL history to reach 650 goals. "He makes tremendous saves and keeps us in the game."

Andreas Johnsson had the other goal for Toronto (36-20-4). Frederik Andersen made 25 stops.

The Leafs, who were playing at home for the first time since Feb. 6 following a season-long six-game road trip that ended with a 3-2-1 record, are now 7-3-2 over their last 12.

"We had lots of great looks," said Toronto head coach Mike Babcock, whose team sits four points back of Boston with a game in hand for second in the Atlantic Division. "The bottom line is you've got to get points and we've suddenly got one of them in three games."

"Every point is very important," Ovechkin said. "Especially on the road, if you get a win or get a point it's a very good result."

Washington, which donated a Stanley Cup ring in honour of last June's victory to the Hockey Hall of Fame on Wednesday, grabbed a 1-0 lead at 3:54 of the second when Ovechkin fired another milestone missile past Andersen with Toronto defenceman Morgan Rielly in the penalty box for holding.

T.J. Oshie won a faceoff to John Carlson, who quickly fed Ovechkin for a one-timer at the left point that flew past Andersen's glove for his 43rd of the campaign, and fifth in the last four games.

Ovechkin — who has 39 goals in 48 career outings against the Leafs, including 22 in 24 games in Toronto — beat Andersen on Jan. 23 for the 1,179th point of his career to tie Sergei Fedorov for the most points in league history by a Russian-born player.

"His numbers, his play speak for itself," Tavares said. "There's no bigger threat over the last 10, 20 years on the power play."

Washington then went up 2-0 at 12:07 on a sequence that started when Wilson rocked Leafs blue-liner Jake Gardiner behind the net. Eller grabbed the puck and found Connolly, who outwaited Andersen to slide home his 15th.

"We've been trying to improve our forecheck," Wilson said. "That's a textbook one there."

The Leafs finally broke through at 4:23 of the third when Johnsson roofed his 16th after Auston Matthews had his wraparound effort stopped.

Toronto got a power play moments later, but Washington restored its two-goal lead when Wilson buried his 16th off a pass from Eller on a 2-on-1 at 6:46.

A physical force all night, the polarizing Wilson celebrated in his hometown by delivering a fake high-five to the crowd along the glass.

"He wants to get better every day, puts the work in," Holtby said. "He's dealt with a lot of adversity and he's handled it perfectly."

Tavares scored with 32.1 seconds remaining and Andersen on the bench, but that's as close as the Leafs, who have just four goals in their three-game slide, would come as the Capitals held on to win consecutive games for the first time since Feb. 5 and 7.

"We can be pretty happy with our effort," said Matthews, who hit the crossbar in the first. "We battled back, it just wasn't enough."

Notes: Leafs centre Nazem Kadri suffered a concussion in Tuesday's 3-2 overtime loss in St. Louis. William Nylander slid over from the wing to take his spot on the third line. ... Toronto forward Patrick Marleau played the 1,635th game of his career, tying him with Scott Stevens for eighth on the NHL's all-time list. ... Ovechkin now has 1,192 career points. ... Washington acquired winger Carl Hagelin from Los Angeles for two draft picks Thursday. The 30-year-old pending unrestricted free agent is expected to make his debut Saturday in Buffalo when the Capitals wrap up a season-long five-game road trip.