OTTAWA — The Senate has passed legislation that will force 1,150 striking employees back to work at the Port of Montreal.
Apr 30, 2021 9:51 PM By: Canadian Press 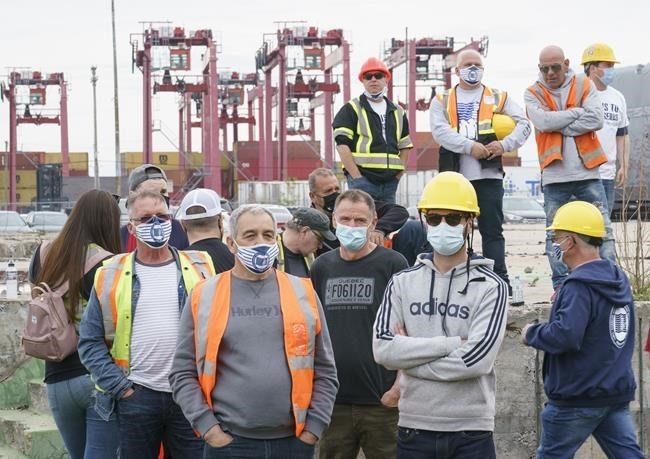 OTTAWA — The Senate has passed legislation that will force 1,150 striking employees back to work at the Port of Montreal.

The House of Commons approved the bill early Thursday morning, with the Conservatives joining forces with the minority Liberal government.

Labour Minister Filomena Tassi said the general strike will end and all port operations must resume when the bill comes into force at 12:00:01 a.m. EDT Saturday morning.

"Canadians and the Canadian economy rely on the Port of Montréal and its workers to keep goods moving," Tassi said in a release.

"The introduction of this legislation was not something our government took lightly."

Tassi said the strike has caused significant harm to the Canadian economy.

She said fresh products worth millions of dollars are spoiling on the ships, leading to higher costs and greater food insecurity, and farmers cannot obtain key fertilizers for spring planting, which would result in a weak harvest this fall.

"The recent work disruptions at the Port of Montréal have had significant negative impacts on Canadians, businesses of all sizes, farmers and medical suppliers," she said. "The disruptions were adding a significant stress to supply chains that are already under strain from COVID-19."

Earlier Friday, Michel Murray of the Canadian Union of Public Employees local that represents the dockworkers said the bill is an attack on the workers' constitutional right to strike.

He told the Senate the bill aims to categorize the port workers as essential workers because of economic considerations. He said no court this century has recognized that criteria.

"In a democratic context, the Charter applies, and we believe that this law is unconstitutional," he said.

Maritime Employers Association President Martin Tessier, who represents the employer, said the bill is not a victory but a failure of the negotiation process.

"All of us in front of you today would have liked a different outcome, but we are at an impasse," he told the Senate.

The union has said the dispute was sparked when the employer began imposing extended workday hours without consulting workers.

It said the employer told workers on April 10 that it would not honour job security provisions in the collective agreement and extended shifts by up to 100 minutes.

The union said workers would have willingly returned to their jobs had the employer simply ended the scheduling practice.

Earlier Friday, Tessier said the employer would no longer impose extended shifts on workers and would respect wage security if the law passes.

"If the law passes we could say, yes, we'll have these extended shifts, but that's not our intention," he said.

"If the law goes through tomorrow, the scheduling will go back to normal and we'll be working with the union."

Tassi said the parties involved in the dispute demonstrated their inability to reach an agreement in over two and a half years of bargaining.

"We have provided federal mediators to support over one hundred bargaining sessions," she said.

"In February, I appointed two of the most senior mediators to assist in the process. They have worked tirelessly to help the parties reach a negotiated settlement."

Tassi said a mediator-arbitrator will be selected in the coming days after receiving names from the parties.

If they do not put forward the same name, Tassi said she will appoint a mediator-arbitrator.

She said the most recent collective agreement will be extended until a new agreement is established.

"Nothing in C-29 precludes the parties from continuing to negotiate and entering into a new collective agreement at any time before the mediator-arbitrator provides his or her final report to me," she said.

"I encourage both parties to work together to provide stability to the operations at the Port of Montréal."

Workers at the port have been without a contract since December 2018 and started to refuse overtime and weekend work earlier this month.

The union previously held a 10-day strike in August.

Murray said his union would challenge the legislation in court.

"We do not think the courts will support it," he said

Murray said workers' right to strike is protected under the Charter of Rights and Freedoms.

This report by The Canadian Press was first published April 30, 2021.

Note to readers: This is a corrected story. A previous version used the word "consecrations" when paraphrasing what Michel Murray of the Canadian Union of Public Employees chapter that represents dockworkers told the Senate. The correct word is "considerations."