Police reform in Toronto and stolen Bibles; In The News for July 9

In The News is a roundup of stories from The Canadian Press designed to kickstart your day. Here is what's on the radar of our editors for the morning of July 9 ... What we are watching in Canada ...
Jul 9, 2020 3:15 AM By: Canadian Press 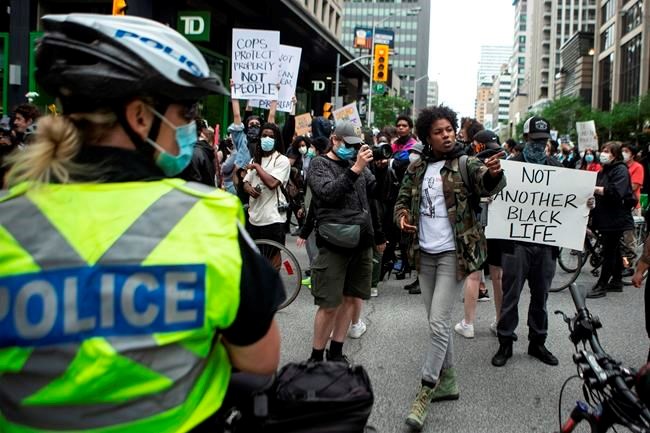 In The News is a roundup of stories from The Canadian Press designed to kickstart your day. Here is what's on the radar of our editors for the morning of July 9 ...

TORONTO — Hundreds of people are expected to speak at a series of town hall meetings on police reform that get underway today in Toronto.

The city's police board says the meetings will be held over four days to accommodate everyone who has signed up to speak.

There have been calls from the public to change how society deals with those in mental health crises, confront anti-Black and anti-Indigenous racism in policing and even defund forces entirely.

The Toronto police board was set to discuss those issues in June, but set up the town hall events due to overwhelming public interest.

Late last month, city council voted against a cut to the force's budget, but passed a motion proposing a suite of changes to policing that includes anti-racism measures, response to those in crises and the implementation of body-worn cameras.

The calls for police reform come in the wake of the police killing of George Floyd, a Black man from Minneapolis, and the death of Regis Korchinski-Paquet, a Black woman who fell from her balcony while police were in her Toronto home.

VANCOUVER — Research from the University of British Columbia suggests people who are dying can hear, even when they're unconscious and near death.

Elizabeth Blundon, who recently graduated from UBC with a PhD in psychology, led the study showing the brain activity of unresponsive dying patients is very similar to when they were responsive and to a control group.

Blundon says the study, which was published recently in Scientific Reports, doesn't answer questions about whether patients can understand who's talking or what is being said.

But she says the findings show families should take comfort in talking to their dying loved ones.

Hilary Jordan of Victoria says the research gives her solace about talking to her husband Ian, a police officer who died two years ago.

She spent 30 years talking to him as he lay unconscious in a hospital after an on-duty crash that led to a head injury.

KINGSTON, Ont. — Police in Kingston, Ont., are looking for the rightful owner of two stolen Bibles.

Investigators say they found the Bibles with other stolen property in an east-end home.

They say officers believe both of the Bibles were stolen recently.

One of the books is an Oxford Holy Bible from 1804, found in an old cigar box.

The other is a white-covered King James Holy Bible found in a wooden box that also contained rosary beads.

Police are asking the owner to come forward.

WASHINGTON — The U.S. Supreme Court is expected to rule on whether Congress and the Manhattan district attorney can see President Donald Trump's taxes and other financial records he has fought hard to keep private.

The high-stakes dispute, which could be resolved today, tests the balance of power between the White House and Congress, as well as Trump's claim that he can't be investigated while he holds office.

It's not clear, even if Trump loses, how much of the material would become public. Some records would go to a confidential grand-jury investigation in New York and the rest, sought by committees of the Democratic-controlled House of Representatives, could contain highly sensitive information not just about Trump, but also about other members of his family and businesses.

Trump has so far lost at every step, but the records have not been turned over pending a final court ruling.

What we are watching elsewhere in the world ...

The new cases bring the total in the world's third worst-affected country to 767,296. India's health ministry said the COVID-19 death toll had risen to 21,129.

Research by the Institute of Mathematical Sciences in Chennai shows that India’s virus reproduction rate ticked up in the first week of July to 1.19 after steadily falling from peak transmission of 1.83 in March. The rate needs to be below one for new cases to start falling.

India's infection numbers have skyrocketed since lockdown restrictions were eased. At the same time, testing has ramped up to more than 200,000 samples a day, compared to just a few hundred in March.

Health experts say the true extent of the virus's spread in India is unknown and more testing must be done, given its population of nearly 1.4 billion people.

Seven-year-old Rodger Woodward became the first person to survive an accidental plunge over Niagara Falls. Roger, his 17-year-old sister Deanne and 40-year-old family friend James Honeycutt were boating on the Niagara River when their motor failed and the current began carrying their boat towards the Canadian Horseshoe Falls. Roger suffered only a slight concussion when he was swept over the Falls wearing only a life jacket and bathing suit. He was picked up by a "Maid of the Mist" tourist boat and spent three days in hospital. Deanne was rescued at the very edge of the Falls, but Honeycutt drowned.