Moving forward on MMIWG findings, Quebec vaccination rates: In The News for June 3

In The News is a roundup of stories from The Canadian Press designed to kickstart your day. Here is what's on the radar of our editors for the morning of June 3 ... What we are watching in Canada ...
Jun 3, 2021 3:15 AM By: Canadian Press 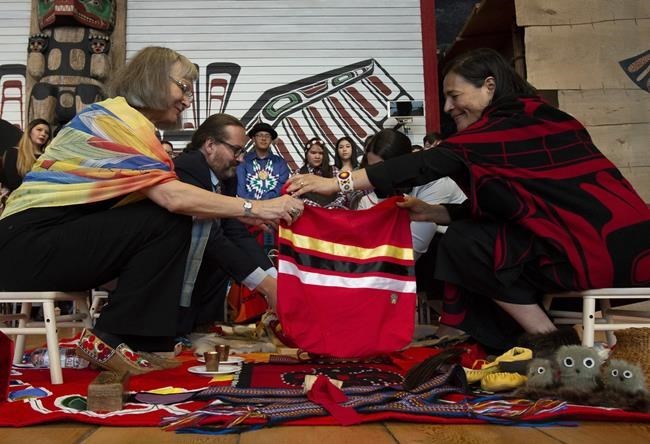 In The News is a roundup of stories from The Canadian Press designed to kickstart your day. Here is what's on the radar of our editors for the morning of June 3 ...

Two years after the sweeping findings of the National Inquiry into Missing and Murdered Indigenous Women and Girls were released, a plan to move forward on its 231 calls to justice is finally being presented.

The plan — branded as a long-promised national action plan — is something of a preliminary, but comprehensive, framework developed by a large group of partners.

Those partners include the families of victims and survivors, each of Canada's distinct Indigenous groups as well as provincial, territorial and federal governments.

An advance draft copy of the document, obtained by The Canadian Press, acknowledges that it is mainly laying the foundation for more detailed and costed steps to come at a later date.

But it does set out several immediate next steps that all partners have agreed to prioritize, including public education campaigns on the issues Indigenous people experience and trauma-informed training for those who work with Indigenous people.

A more in-depth implementation strategy will be developed later, with more specific information, including more medium and long-term priorities that all involved say they hope will lead to systemic change.

The plan to be released later today in a virtual ceremony does not include any dollar figures attached, but it says funding, timelines and identifying who will be responsible for making each commitment happen will be among the next steps.

Two of the cities most affected by COVID-19 in Quebec have some of the province's lowest vaccination rates.

They include Montreal and its northern suburb, Laval.

Data from Montreal’s public health department shows a wide gap in vaccination rates between some wealthy and poorer neighbourhoods.

Laurence Monnais, a medical historian at Université de Montréal who has studied vaccine hesitancy, says that’s not a surprise.

Monnais says it’s not necessarily the case that communities most affected by the disease will be the first to get vaccinated.

She says lack of access to vaccination sites plays a role, as does lack of trust in government.

The new White House science adviser is painting a rosy near future where a renewed American emphasis on science not only better prepares the world for the next pandemic with plug-and-play vaccines, but also changes how medicine fights disease and treats patients, curbs climate change and further explores space.

In his first interview after being sworn in Wednesday, Eric Lander said he wants to have a vaccine ready to fight the next pandemic in just about 100 days after recognizing a potential viral outbreak.

“This is a moment in so many ways, not just health, that we can rethink fundamental assumptions about what’s possible and that’s true of climate and energy and many areas,” Lander told The Associated Press.

Lander is a mathematician and geneticist by training who was part of the human genome mapping project and directed the Broad Institute at MIT and Harvard. He said he is particularly focused not so much on this pandemic, but the lessons learned from this one to prepare for the next one.

“It was amazing at one level that we were able to produce highly effective vaccines in less than a year, but from another point of view you’d say, ‘Boy, a year’s a long time,’” even though in the past it would take three years or four years, Lander said. “To really make a difference we want to get this done in 100 days. And so a lot of us have been talking about a 100-day target from the recognition from a virus with pandemic potential.”

“It would mean that we would have had a vaccine in early April if that had happened this time, early April of 2020,” Lander said. “It makes you gulp for a second, but it’s totally feasible to do that.”

VIENNA — European diplomats expressed hope Wednesday that agreement could soon be reached for Tehran to comply with a 2015 deal on Iran's nuclear program aimed at curbing its atomic ambitions and also see the United States rejoin the accord.

Enrique Mora, the European Union official who chaired talks in Vienna, said delegations from Russia, China, Germany, France, Britain, Iran and the U.S. would return home to brief their governments and then meet again in the Austrian capital next week.

"I'm sure that the next round will be the one in which we will finally get the deal," Mora said after the meeting.

"There are a few political issues (and) there are a number of technical issues, again rather complex," he added. "But I can say that they are fewer than they were one week ago. So we are (on) a good track."

Mora said: "I think every capital has to give a green light to their respective delegations to get the agreement, and I think that will be the case next week."

Other European diplomats, speaking on condition of anonymity as they weren't authorized to be quoted by name, described the talks in Vienna as "intense and productive," but cautioned that they would become more difficult as delegates tackle harder issues.

While progress had been made and important aspects of a future deal had been hammered out, the diplomats said that tough decisions lie ahead and nothing would be agreed until everything was agreed.

Then-prime minister Brian Mulroney and the 10 premiers signed the Meech Lake constitutional accord. It called for Quebec to have special status within Canada, plus more powers for the other provinces. But the deal died in June 1990 when the Manitoba legislature failed to approve it within a three-year time limit. As well, Newfoundland had rescinded its initial approval following a change of government.

TORONTO — The CBC says its is attempting to represent a wider slate of voices and regions across the country in its new slate of upcoming TV programs, which includes the release of an Indigenous investigative drama starring Sarah Podemski and Sarah Gadon

"The Red" is from Vancouver-based Métis creator and writer Marie Clements, who is also an award-winning filmmaker, playwright, producer and actor.

Podemski and Gadon also executive produce the one-hour drama, which is inspired by real crimes and will debut sometime between fall and winter of 2022-23.

The CBC announced more than 35 new and returning original series from Canadian talent for its upcoming 2021-22 schedule.

Other newly revealed titles include the comedy "Son of a Critch" from "This Hour Has 22 Minutes" cast member Mark Critch, based on his memoir about growing up in St. John's, N.L., in the 1980s. It will premiere in the winter.

"We have all worked very hard with our partners to reflect the country in new ways with the myriad of voices from different parts of the country," Sally Catto, general manager of entertainment, factual and sports at the CBC, said in an interview.

"It's really important to us as part of our offer to be sharing parts of our history that perhaps people aren't always aware of or don't know about," she added. "We also know we have more work to do to better represent the voices of Black, Indigenous and people of colour."

EDMONTON - Photos of Alberta Premier Jason Kenney and members of the United Conservative caucus dining together on a rooftop patio are drawing disapproval from critics who say the politicians flouted the province's COVID-19 rules.

The group, which also included Health Minister Tyler Shandro, was spotted sitting around a table on a balcony of the Federal Building in downtown Edmonton.

A "concerned Albertan" captured images of their meal and what appear to be bottles of alcohol.

The photos were shared with CTV News and several other media outlets with a request to remain anonymous, and are circulating on social media.

The politicians are being criticized by many _ including NDP Opposition Leader Rachel Notley and Duane Bratt, a political scientist at Mount Royal University in Calgary _ who both questioned the optics of the gathering.

The premier's office says in a statement that the gathering complied with current COVID-19 restrictions.

This report by The Canadian Press was first published June 3, 2021