OTTAWA — Canada’s top military police officer told a parliamentary committee on Tuesday that he is not beholden to the top brass, as he responded to allegations that former chief of the defence staff Jonathan Vance said he “owned” the Canadian Forces
May 11, 2021 3:14 PM By: Canadian Press 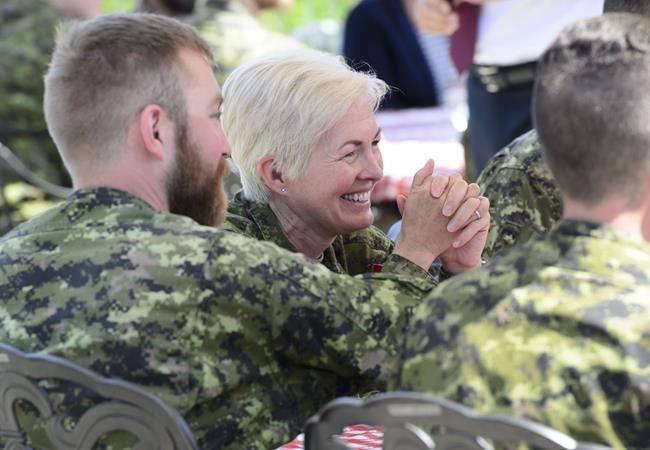 OTTAWA — Canada’s top military police officer told a parliamentary committee on Tuesday that he is not beholden to the top brass, as he responded to allegations that former chief of the defence staff Jonathan Vance said he “owned” the Canadian Forces National Investigation Service.

Provost Marshal Brig.-Gen. Simon Trudeau acknowledged during an appearance before the House of Commons committee on the status of women that there is a perception his officers are not independent of the chain of command.

He said "that can be problematic as a barrier of reporting to the military police,” adding that he recently provided former Supreme Court justice Morris Fish, who is reviewing the military justice system, with recommendations on ways to address the problem.

But, he said, “I am independent of the chain of command and, I have full command of the military police involved in policing. And we will investigate allegations regardless of the rank or status. We'll analyze the facts, look at the evidence and lay charges as required.”

His comments followed explosive testimony last month from Maj. Kellie Brennan, who told the committee Vance was in an inappropriate relationship with her, which started in 2001 and continued after he became Canada’s top military commander in 2015.

Trudeau, the provost marshal, would not speculate on why Vance, who has declined past requests for comment but denied to Global News in February any inappropriate conduct, would have made such a comment. He instead repeatedly asserted his independence.

The provost marshal was also grilled about a private Facebook group in which current and retired military police officers allegedly mocked Brennan and her testimony. Trudeau said he was “disappointed,” and referred the matter to “the professional standards section.”

Conservative members were pointed with Trudeau, accusing him of painting a rosy picture of his unit in a previous appearance. Trudeau said he had since listened to testimony from victims and made several changes, including more training for himself and his officers.

Trudeau was one of several witnesses to appear before the committee on Tuesday, which is studying the broader issue of military sexual misconduct. Those others included the senior officer responsible for leading culture change in the military, Lt.-Gen. Jennie Carignan.

Carleton University professor Leah West also described her own traumatic experience in the military, which included being sexually assaulted early in her career and then forced out of uniform 10 years later over a relationship with an American officer in Afghanistan.

“My experience is an extreme example of the double standard women in uniform face every day,” West told the committee after being interrupted by members several times because of technical issues.

“My biggest failure in life — actions for which I was pushed out of the Armoured Corps, for which I continue to carry immense shame — is, however, allegedly, precisely the type of leadership displayed by the man who ultimately served as this country's longest serving chief of defence stuff.”

Carignan in turn said the military was still finalizing her office, which will be responsible for addressing sexual misconduct and hate in the military, but that new guidance would be given to commanders on their expected behaviour “to kick-start the culture-change momentum.”

Carignan, a veteran of the war in Afghanistan who recently returned from a year commanding the NATO training mission in Iraq, said it will take about six months to get her office up and running, and that two areas where it will focus are on training and the complaint process.

It will also be responsible for implementing recommendations brought forward by retired Supreme Court justice Louise Arbour, who has been tapped to conduct a review of the military’s handling of sexual misconduct.

Asked why the military couldn’t simply implement the recommendations made by retired Supreme Court justice Marie Deschamps in 2015, Carignan suggested it is already moving on most of them, saying: “A lot of these recommendations have already been actioned.”

Opposition parties, experts and Deschamps herself have noted that her main recommendation calling for the creation of an independent centre to receive complaints and hold the military to account has not been followed.

Tuesday’s status of women committee meeting came amid uncertainty about a separate committee probe into how the Liberal government handled an allegation against Vance after it was raised by the military ombudsman to Defence Minister Harjit Sajjan in March 2018.

Conservative defence critic James Bezan said he still wants answers into why the government did not do more after it became aware of the allegation, and that members still want to hear from Sajjan’s former chief of staff and could call some other witnesses to testify again.

He also wants to know why no one in the Prime Minister's Office told Prime Minister Justin Trudeau about the allegation against Vance, as Trudeau has claimed.

But Bezan also noted that summer is fast approaching and said the committee needs to finish not one but three reports before Parliament rises, possibly the last time before an election, including on the impacts of COVID-19 on the military and access to mental-health services for troops.

NDP defence critic Randall Garrison said he remains concerned about a lack of accountability around the government’s failure to do more on the Vance allegations, suggesting it undermines promises of action now. But he also suggested the committee has reached the end of its investigation.

“I don't know who else can answer that question other than the prime minister and the minister of defence,” he said.

“We've asked them to take responsibility. And explain why there was no investigation and no consequences. So that is the only two people left. They've been asked many times to clarify, and they clearly don't intend to.”

This report by The Canadian Press was first published May 11, 2021.