'It was a going concern': Remaining bar and hotel in Alberta coal ghost town for sale

WAYNE, Alta. — Built during the First World War, it survived the Great Depression, the Second World War and the closure of coal mines in the 1950s. Now the historic Last Chance Saloon in the ghost town of Wayne in southern Alberta is up for sale.
May 15, 2021 9:00 AM By: Canadian Press 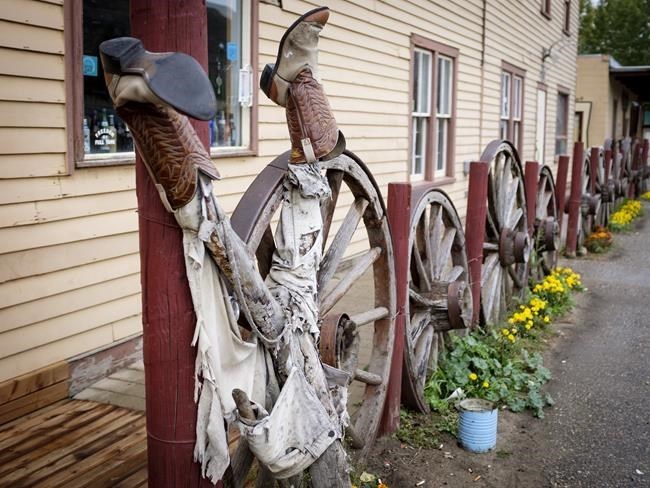 WAYNE, Alta. — Built during the First World War, it survived the Great Depression, the Second World War and the closure of coal mines in the 1950s. Now the historic Last Chance Saloon in the ghost town of Wayne in southern Alberta is up for sale.

There are a century's worth of memories in the three-storey wooden hotel, including photos of the community in its heyday, mining equipment and three bullet holes — framed on one wall of the bar — dating back to the 1970s when a trigger-happy bartender wanted to encourage some patrons to pay their tab.

The hotel, about 15 kilometres southeast of Drumheller, Alta., was built by the Rosedeer Coal Co. to house its workers and opened in 1913. The saloon was added a few years later so employees being paid in company scrip could buy a meal or a beer.

"It originally was built for the coal miners when Wayne was starting to boom with 2,500 residents in the early 1920s. Now we're down to 29 residents and this is one of the few remaining structures from that time," explains current owner Dave Arsenault, who has to sell the hotel as part of a divorce settlement.

"It was a going concern. There was more than one hotel out here. There were 12 coal mines and it was a bustling place. Of course, there's almost nothing left but there's lots of photos around depicting what it was like in the day.

"That's really the charm of this place."

The last working mine in the area, Sovereign Coal, closed in 1957.

A University of Calgary history professor says many people don't realize how big an effect the coal industry had in early 20th-century Alberta.

Georg Colpitts says the Drumheller area was one of the "ground centrals of early coal-mining" in the province. Many early explorers to Western Canada not only looked at the agricultural potential, but considered the vast amounts of coal that could be used to support the British Empire.

"Wherever these individuals found large coal deposits it was factored into the thinking of London investors, to the colonial office. Coal was in the backdrop of a lot of the thinking of empiring."

Colpitts said not only did the area have coal deposits, CN decided to develop a railhead.

"Those were the two magic combinations to tap Drumheller into the international demand and supply of coal. It became the lifeblood of that valley and continued to be so up until about the '70s."

The hotel is listed for $925,000. Arsenault says there's already been some interest from prospective buyers.

"It's unfortunate because I think the timing is great for a nice rebound in the hospitality game, but I guess that's a selling feature, too," he says.

"As far as I'm concerned, we're conducting business as usual. We've got weddings booked. We've got some groups coming in, lots of recurring old friends that have called and made reservations. Camping is open this year."

WayneStock, a three-day annual music festival with acts on three stages in and around the saloon, posted a record attendance of about 2,000 in 2019, but has been cancelled since due to the pandemic.

Some think the third floor of the hotel, which is locked up and used only for storage, is haunted. The hotel was featured in Season 3 of the Canadian ghost-hunting TV show, "The Other Side.''

It has also hit the big screen.

The 1983 movie "Running Brave," starring Robby Benson, was filmed in part at the hotel as well as the 2000 martial arts western comedy "Shanghai Noon" which starred Jackie Chan, Owen Wilson and Lucy Liu.

This report by The Canadian Press was first published May 15, 2021.