COVID has turned Old Montreal, once a playground for tourists, into violent district

MONTREAL — For Fouad Filali, owner of Le Sénateur restaurant in Old Montreal, the families with children who used to visit the historic district have been replaced by young people who sometimes are violent and harass women.
Jun 5, 2021 3:00 AM By: Canadian Press 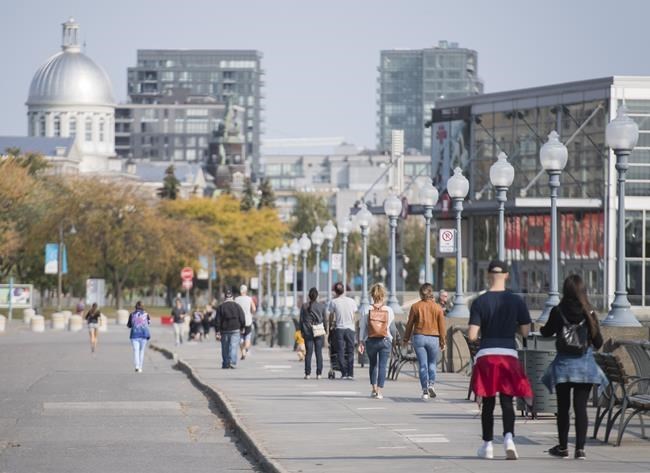 MONTREAL — For Fouad Filali, owner of Le Sénateur restaurant in Old Montreal, the families with children who used to visit the historic district have been replaced by young people who sometimes are violent and harass women.

Montreal's iconic neighbourhood has struggled without many tourists since the start of the COVID-19 pandemic, and residents, business owners and workers say the area has become more dangerous — especially at night. They say they hope that as Montreal reopens from COVID-19 restrictions and tourists return, the disorder will end.

"It brought a climate of fear," Filali, who has owned his restaurant for more than 25 years, said in a recent interview about the violence in the district. "Now, I tell my staff when we close (at night), we lock the doors and we don't open for anyone."

Last September, several people, including a Montreal police officer, were injured in a shootout in the area. In April, rioters upset at the COVID-19 curfew lit garbage fires across the neighbourhood, smashed store windows and fought with police. Most recently, an 18-year-old woman was shot in the foot and a 19-year-old man was stabbed in the upper body during an outdoor party last weekend celebrating the end of the curfew, which had been in place since January.

The latest violence led the federal corporation that owns the Old Port of Montreal to impose an overnight curfew on the land it controls adjacent to Old Montreal, between train tracks and the St. Lawrence River. Old Port spokesman Jean-Phillipe Rochette says the corporation wants to make sure health orders are respected.

"Over the past 14 months, there are many things that have surprised me," Rochette said about the heavy outdoor partying in the area. "Normally, it is a tourist and family sector and we intend to keep it that way."

Resident Veronique Pascal has been living in the neighbourhood for the past four years and says that while partying and loud noise have always been a part of life in the district, the health crisis has aggravated the problem.

"Old Montreal is normally fancy," she said in a recent interview. "We tell ourselves that we are protected by this feeling of luxury, but the pandemic changed everything."

Carolyn Pinto Cellere, who's lived in Old Montreal for the past 15 years, does not describe the neighbourhood as luxurious. She says the constant street partying since bars closed last October is pushing residents to move away.

"Modified cars, fights, crazy driving, garbage everywhere, lots of people who use our front doors as toilets … it's a little discouraging having to warn my children to avoid pee puddles," she said.

On May 28, the Quebec government lifted the curfew and reopened restaurant patios across the province. Since then, videos of big street parties and violence in Old Montreal have been posted to social media.

For 28-year-old Nelsy Raoul, the sudden freedom explains the mayhem in the streets.

“This is what happens when you deprive people for so long and then you give everything back at the same time,” Raoul, who works at restaurant Comptoir 400, said in a recent interview. She says she understands the need to celebrate but condemns the violence.

Raoul says she feels unsafe in the area for the first time since she started working at the restaurant four years ago. "We are all much more worried than before, we avoid going home alone because we witnessed several fights," she said.

For Cellere, the curfew at the Old Port, which is in place until further notice, will only push the problem deeper into residential streets, which she said won't help people feel safer.

"When I go out for a walk, there are groups of drunk, young guys making rude comments and you don't feel like they're going to react peacefully if you tell them off," Cellere said.

The rise in the number of clubs and restaurants over the last few years along Rue de la Commune, a main street in Old Montreal, has contributed to attracting troublemakers, she said.

"Since the end of the curfew, all these people come to celebrate here, but they have no place to do it," Cellere said.

Restaurants in Montreal are scheduled to fully reopen Monday and bar patios are to reopen June 11. Indoor private gatherings, however, are still prohibited.

Pascal said she thinks when people have a place to go, fewer of them will choose to party in Old Montreal's streets.

"People have been locked up, so it's going to be an adjustment," she said.

This report by The Canadian Press was first published on June 5, 2021.