In The News is a roundup of stories from The Canadian Press designed to kickstart your day. Here is what's on the radar of our editors for the morning of March 31 ... What we are watching in Canada ...
Mar 31, 2021 3:19 AM By: Canadian Press 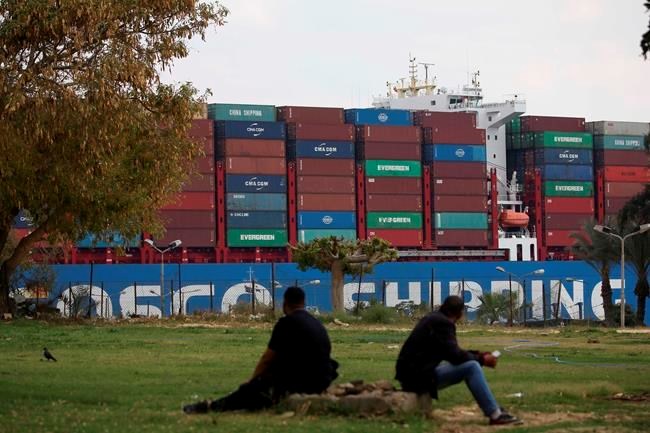 In The News is a roundup of stories from The Canadian Press designed to kickstart your day. Here is what's on the radar of our editors for the morning of March 31 ...

"We're entering the final stretch of this crisis," Trudeau said at a news conference on Tuesday in Ottawa.

Trudeau said Pfizer and BioNTech will send another five million doses of their vaccine to Canada in June, bringing total shipments from the company in the spring to 17.8 million. Pfizer is expected to ship more than one million doses a week in April and May, and more than two million every week in June.

Procurement Minister Anita Anand said Canada now expects 4.4 million doses of the AstraZeneca vaccine by June 30, and the first shipments of Johnson & Johnson's single-dose vaccine are set to arrive at the end of April. She doesn't know yet how many doses will be in that first shipment.

Even without J&J, and barring any unexpected interruptions in production or export of vaccines, Canada is in line to get more than 44 million doses before Canada Day.

That should mean all adults over 18 will be offered a vaccine faster, and that the wait for a second dose may not be as long as the current four months.

Death threats over an animal control plan, personal insults over stop signs, social media attacks targeting spouses — these are examples of what politicians in Quebec say has become an increasingly difficult reality of their jobs during COVID-19.

From suburban mayors to the premier, politicians in the province have been raising the alarm about the rise in hateful and occasionally violent online messages they receive — and some are calling for stronger rules to shield them.

On Saturday, Premier Francois Legault denounced the torrent of hateful messages that regularly follow his online posts, which he said has worsened "in the last months."

"Each time I post something now, I'm treated to an avalanche of aggressive and sometimes even violent comments, and to insults, obscenities and sometimes threats," Legault wrote on Facebook.

Several Quebec municipal politicians have announced they won't be running again in elections this fall, in part because of the hostile climate online. Others, including the mayors of Montreal and Quebec City, have spoken in the past about receiving death threats. In November, police in Longueuil, Que., arrested a man in connection with threats against the city's mayor and other elected officials over a plan to cull deer in a municipal park.

Philippe Roy, the mayor of the Town of Mount-Royal, an on-island Montreal suburb, says he's leaving municipal politics when his current term ends, partly because of the constant online insults directed at him and his spouse.

DONNA, Texas – The main border detention facility for migrant children in Texas has been opened to journalists for the first time, revealing a severely overcrowded tent structure.

More than 4,000 people, including children and families, were crammed into a space intended for 250 and the youngest were kept in a large play pen with mats on the floor for sleeping.

With thousands of children and families arriving at the U.S.-Mexico border in recent weeks and packing facilities, President Joe Biden has been under pressure to bring more transparency to the process. U.S. Customs and Border Protection allowed two journalists from The Associated Press and a crew from CBS to tour the facility in Donna in the Rio Grande Valley on the condition they share their reporting with other outlets as part of a pool arrangement.

The children were being housed by the hundreds in eight "pods" formed by plastic dividers, each about 297 square metres in size. Many of the pods had more than 500 children in them, spaced closely together and many of them laying on the ground on mats and foil blankets.

The youngest children — among them, three-year-old girl being cared for by her 11-year-old brother and a newborn with a 17-year-old mother — are kept out of the pods and sleep in a playpen area.

“I’m a border patrol agent. I didn’t sign up for this,” Escamilla said.

Experts boarded the skyscraper-sized Ever Given as it idled Tuesday in Egypt's Great Bitter Lake, just north of the site where it previously blocked the canal. A senior canal pilot, speaking on condition of anonymity because he was not authorized to talk to journalists, told The Associated Press that experts were looking for signs of damage and trying to determine why the vessel ran aground.

There could be significant damage to the the ship, warned Capt. John Konrad, the founder and CEO of the shipping news website gcaptain.com.

Stuck for days across the canal, the ship's middle rose and fell with the tide, bending up and down under the tremendous weight of some 20,000 containers across its 400-metre length. On Monday, when workers partially floated the ship, all that pressure came forward to its bow.

“Structural integrity is No. 1. You know, there was a lot of strain on that ship as it was sagging in the waterway,” Konrad said.

The ship's owner, Shoei Kisen Kaisha Ltd., said it would be part of the investigation. It refused to discuss possible causes of the grounding, including the ship's speed and the high winds that buffeted it during a sandstorm, saying it could not comment on an ongoing investigation. Initial reports also suggested a “blackout” struck the vessel, something denied by the ship's technical manager.

Newfoundland (now Newfoundland and Labrador) – the oldest dominion in the British Commonwealth – became Canada's 10th province. Two referendums were held after the Second World War; the first was inconclusive, and the second approved Confederation by only 52 per cent to 48. Joey Smallwood, who led the drive to join Canada, became Newfoundland's first premier and was known as Canada's only living Father of Confederation. Smallwood served as premier until 1972. He died in 1991, a week before his 91st birthday.

NEW YORK – Historians estimate that one in four American cowboys were Black but you would be hard pressed to find a movie genre whiter than the Western.

“Concrete Cowboy" is a father-son drama set around Fletcher Street Stables, one of the oldest and last-remaining of Philadelphia's hardscrabble inner-city stables.

“That’s a tough neighbourhood but if you’re on top of horse, people literally look up to you,” says Gregory Neri, author of the novel “Ghetto Cowboy,” the basis for the film directed by Ricky Staub.

Neri first heard about the stables in 2008 when a friend sent him a link to a Life magazine article about Fletcher Street.

“The first image I saw was this Black kid on the back of a horse in the middle of the inner city in North Philly,” says Neri. “I had the reaction most people have, which is: ‘What is this? What’s going on here?’”

“Concrete Cowboy,” which premiered last fall at the Toronto International Film Festival and debuts Friday on Netflix, shines perhaps the brightest light yet on an abiding community of Black cowboys now facing an uncertain future. It was shot in the vacant lots Fletcher Street cowboys ride in, and its co-stars -- alongside a cast of Elba, Caleb McLaughlin, Method Man and Jharrel Jerome -- include many of the stables’ actual riders.

CAPE CANAVERAL, Fla. – The two remaining seats on a private SpaceX flight have been filled with a scientist-teacher and a data engineer whose college friend actually won a spot but gave him the prize.

The new passengers: Sian Proctor, a community college educator in Tempe, Ariz., and Chris Sembroski, a former Air Force missileman from Everett, Wash. They will join flight sponsor Jared Isaacman and another passenger for three days in orbit this fall.

Their SpaceX Dragon capsule — currently parked at the International Space Station for NASA — will launch no earlier than mid-September.

Isaacman, 38, a pilot who will serve as spacecraft commander, still won’t say how much he’s paying. He's donating $100 million to St. Jude, while donors so far have contributed $13 million, primarily through the lottery that offered a chance to fly in space.

Hayley Arceneaux, 29, was named to the crew a month ago. The St. Jude physician assistant was treated there as a child for bone cancer.

Proctor, 51, beat out 200 businesses and nabbed the seat reserved for a customer of Isaacman's company. An independent panel of judges chose her space art website dubbed Space2inspire.

“It was like when Harry Potter found out he was a wizard, a little bit of shock and awe,” Proctor told The Associated Press last week. “It’s like, ‘I’m the winner?’”

Sembroski, 41, donated and entered the lottery but wasn’t picked in the random drawing earlier this month — his friend was. His friend declined to fly for personal reasons and offered the spot to Sembroski, who worked as a Space Camp counsellor in college and volunteered for space advocacy groups.

This report by The Canadian Press was first published March 31, 2021