Canadians need to cut contacts by a quarter to control COVID-19 outbreak: Tam

New federal projections suggest that Canadians need to cut a quarter of their contacts to keep the COVID-19 outbreak under control, as several provinces wrestle with how far their lockdown measures should go to reinforce that message.
Oct 30, 2020 5:09 PM By: Canadian Press 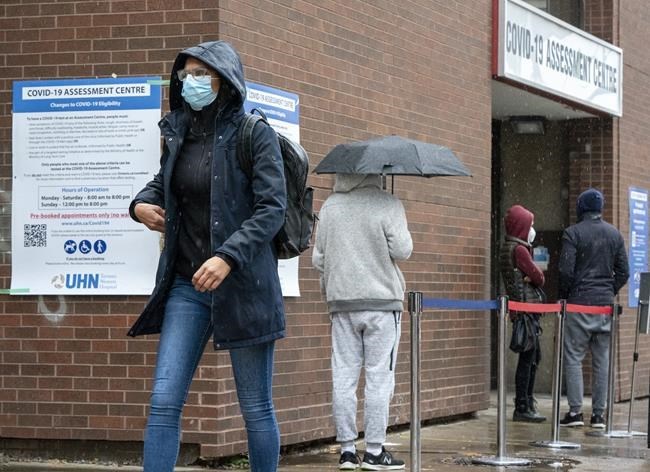 New federal projections suggest that Canadians need to cut a quarter of their contacts to keep the COVID-19 outbreak under control, as several provinces wrestle with how far their lockdown measures should go to reinforce that message.

The government released forecasts Friday indicating that at current rates of socializing in person, Canada could see COVID-19 case counts increase to 8,000 per day come early December. If Canadians reduce their rates of contact by 25 per cent, that number could drop below 2,000, according to the modelling.

Dr. Theresa Tam, Canada's chief public health officer, said the country has lost its lead in the ongoing "dance" with COVID-19 after curbing cases over the summer, and taking it back will require discipline.

"What comes next for us this fall and winter is for every one of us to determine through our decisions and our actions," Tam told a news conference. "Letting down our guard and letting this virus win is not an option."

Tam urged Canadians to limit their contact with others as much as possible, including shrinking social bubbles and maintaining physical distance in public places.

Tam said further restrictions and closures may be needed to buttress these practices in communities where the virus is surging.

But Prime Minister Justin Trudeau said he believes Canada can curb the swell of infections without snapping back to sweeping shutdowns.

"We cracked down with the big hammer of a national lockdown in the spring, but now our tools are more refined," Trudeau told reporters in French. "We know which institutions and businesses ... are more at risk for outbreaks. Therefore, our approach is more targeted."

One of those tools Trudeau cited is the COVID Alert app, which can now provide more precise information to people who are exposed to the virus. App users who test positive for COVID-19 can enter the time their symptoms started, or the date they were tested, giving those who were exposed a better sense of when they were at risk.

But some provinces are fine-tuning how targeted their approach should be, as Ontario and Quebec face blowback from sectors under tighter strictures, and Manitoba imposes new restrictions on many businesses.

Ontario's associate chief medical officer of health, Barbara Yaffe, said the province will look at the federal recommendations to shrink social circles and determine if the Ontario guidelines — which limit private indoor gatherings to 10 people or fewer, and private outdoor events to 25 or fewer — need to be updated.

"We will review that, obviously, and consider whether we need to change the guidelines. I think everybody just needs to remember how this infection is spread," Yaffe said at a conference Friday, urging people to limit contacts outside of their household when possible.

"Don't do anything that's not essential. Go to work, go to school, groceries and so on, medical appointments. But we really need to try and minimize the interaction we have with other people."

Ford said the restrictions are temporary and have helped the province avoid catastrophic outcomes. He also said a plan to reopen shuttered businesses is coming next week.

The Manitoba government is ordering many businesses in the Winnipeg region to shut down after the province reported an all-time high of 480 new COVID-19 cases — more than double the previous daily record.

Starting Monday, bars and restaurants in the Winnipeg region will only be allowed to offer takeout and delivery. Movie theatres and concert halls will be closed and most retail stores will be limited to 25 per cent capacity.

Meanwhile, Quebec officials announced late Friday that the Saguenay-Lac-St-Jean and Chaudiere-Appalaches regions were being elevated to the highest COVID-19 alert level.

Twelve regions in the province are now either partially or entirely in the so-called red zone, which will face increased restrictions until Nov. 23.

Premier Francois Legault extended the partial lockdown of the province's maximum-alert regions this week, saying public health would re-evaluate the situation in two weeks to see if measures could be eased earlier.

Also Friday, Quebec City police handed $1,000 fines to a gym owner and two clients after a coalition of independent fitness centres vowed to reopen this week in defiance of red-zone restrictions.

More regions have been hit by outbreaks of more than 100 cases over the past two weeks, according to Friday's federal analysis, including 26 Indigenous communities that have reported two or more active cases.

Trudeau announced more than $200 million in funding to help Indigenous communities contain the spread of the virus.

The government data shows infections are rising among Canadians aged 20 and under. Tam said the uptick is related to the reopening of schools, universities and daycares.

This report by The Canadian Press was first published Friday, Oct. 30.

Teen recalls hearing laughter during sex assault at St. Mike's school, court hears
Dec 1, 2020 5:08 PM
Comments
We welcome your feedback and encourage you to share your thoughts. We ask that you be respectful of others and their points of view, refrain from personal attacks and stay on topic. To learn about our commenting policies and how we moderate, please read our Community Guidelines.