OTTAWA — A Canadian warship sailed through sensitive waters near China this week amid heightened tensions between the two countries.
Mar 31, 2021 4:21 PM By: Canadian Press 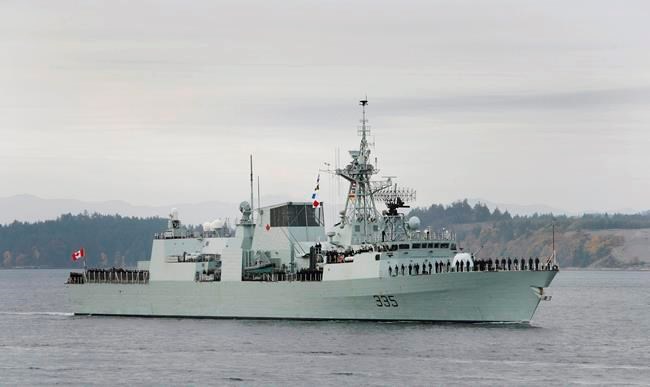 OTTAWA — A Canadian warship sailed through sensitive waters near China this week amid heightened tensions between the two countries.

The Department of National Defence says HMCS Calgary passed through the South China Sea while travelling from Brunei to Vietnam on Monday and Tuesday.

The passage did not go unnoticed by China, which a Defence official, speaking on condition of anonymity, says shadowed the Canadian ship.

China claims much of the sea as its territory and has been greatly expanding its military presence in the area but many of those claims have been rejected by China's neighbours as well as several international rulings.

The Calgary's passage could also aggravate tensions with Beijing, which has been engaged in a diplomatic furor with Ottawa since Huawei executive Meng Wanzhou was arrested at the Vancouver airport in December 2018.

Beijing subsequently arrested two Canadians, Michael Kovrig and Michael Spavor, in what the federal government and others have described as retaliation for Meng's detention.

Meng is now facing possible extradition to the U.S. to face fraud allegations while China has launched court proceedings against Kovrig and Spavor behind closed doors in recent weeks.

Defence Department spokesman Daniel Le Bouthillier  confirmed the Calgary passed near the disputed Spratly Islands, which both China and the Philippines claim and where the Chinese military has set up facilities and equipment.

He said sailing through the South China Sea was the most practical route for the warship,

Canadian officials have previously denied trying to send any message when warships have passed through waters claimed by China.

But documents obtained by The Canadian Press last year show such passages are often discussed at the highest levels of government before being approved.

One transit by HMCS Ottawa through the South China Sea's Taiwan Strait last year was described in the documents as having "demonstrated Canadian support for our closest partners and allies, regional security and the rules-based international order."

This report by The Canadian Press was first published March 31, 2021.