Canada's response on tariffs won't be bound by terms of USMCA: negotiator 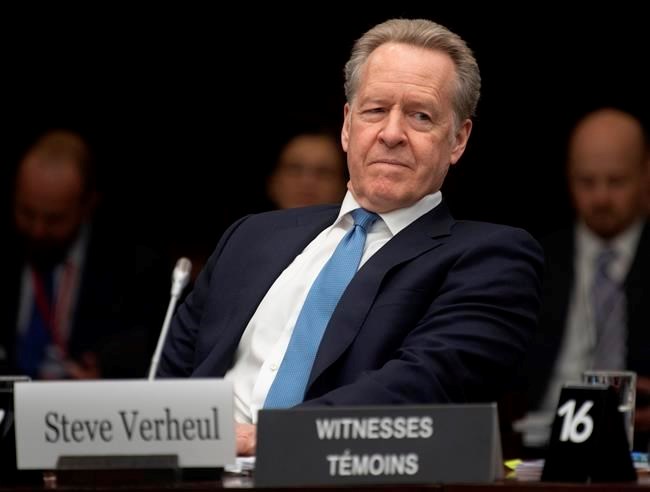 WASHINGTON — Donald Trump's trade ambassador continued to keep Canada's steel and aluminum industry in suspense Thursday as trade experts, labour bosses and business leaders considered how best to retaliate if the White House decides to impose fresh tariffs on metals from north of the border.

In a rare public appearance, U.S. Trade Representative Robert Lighthizer — speaking to members of the London-based Chatham House think tank —offered no hint of whether or when the U.S. intends to reprise its tariff offensive against Canada in response to an alleged "surge" in exports of Canadian-made aluminum.

He did, however, provide some insight into why Section 232 tariffs, so named for the portion of U.S. law that permits them on the basis of a perceived threat to national security, have proven such a go-to lever for the Trump White House.

"Unquestionably, we did have a crisis," Lighthizer said of the decision in 2018 to impose tariffs on steel and aluminum imports from around the world. He suggested the move was aimed primarily at China — a longtime trade foe that has been in American sights for using its outsized production capacity to depress prices and undermine U.S. producers.

He described himself as part of an administration determined to move the United States beyond its post-war mission to be a charitable principal architect of the new industrial order, a role in which he believes the country has lingered too long at the expense of American jobs and prosperity.

Imposing tariffs was "essential" in 2018, "particularly looking back at where we would be if we hadn't done something on it," Lighthizer said. "And when you take an action like that, you almost have to take it on a global basis."

Tariffs are a blunt instrument that can also cause domestic costs to rise, he acknowledged — but drastic action, exacting a toll that Americans were willing to pay, was necessary to bring the U.S. back from an "extreme free-trade position" that came at the expense of American manufacturing jobs.

"There's a balance there, and the balance had swung way too far into the level of save a penny here, save a penny there, moving half your manufacturing to China and the other half to Vietnam," Lighthizer said.

"Are tariffs a perfect instrument? No. But is there another instrument? I don't know of it ... It's a far more complicated thing than this simple comment that, 'Well, it's always paid by the consumers.' I just don't buy it."

While Lighthizer spoke, Steve Verheul — Canada's chief trade negotiator during the effort to replace NAFTA and an assistant deputy minister at Global Affairs Canada — was telling MPs on the House of Commons trade committee in Ottawa about the federal government's retaliation options.

The U.S.-Mexico-Canada Agreement, which officially replaced NAFTA last week, won't tie the government's hands if that time comes, Verheul said. The separate cease-fire statement that saw the White House lift its original tariffs in May 2019 allows either country to impose retaliatory levies against incoming aluminum or any products that contain it, he said.

What actions Canada should take "really depends on what kind of action the U.S. takes," Verheul told the committee.

"We have options in terms of how we might respond on a bilateral basis, because as I mentioned, the statement itself says 'aluminum-containing products.' That's a very broad category. So there are a number of areas we could explore on that front."

Should the U.S. action itself go beyond that May 2019 statement, Canada would be able to respond in kind, he added.

The U.S. claims of a spike in aluminum exports since the start of the pandemic are actually the result of always-on smelters in Canada adjusting their production away from the specialized, value-added products usually sought by automakers, which were forced to shut down assembly lines when the COVID-19 crisis hit.

Producers pivoted towards more generic primary aluminum products, shipping to the only storage warehouses that are cost-effective: facilities in the U.S., which is where the lion's share of the North American aluminum market is.

"We see no justification for the U.S. to be contemplating this kind of action, because we have had no surge," Verheul said.

"There has simply been a situation where the aluminum sector has made some adjustments, as aluminum industries in the U.S. have done, to accommodate the market demands during this particular period."

Derek Burney, formerly Canada's ambassador to the U.S. and one-time chief of staff to prime minister Brian Mulroney, urged Canada to take a hard line with the forces of protectionism, which he warned are on the march in the time of COVID-19 — and won't evaporate in the U.S. even if the Democrats take over the White House in November.

"Because bilateral trade is roughly in balance, there is no reason for Canada to become a passive punching bag for U.S. protectionists and mercantilists," Burney told the committee. "Arbitrary tariffs once again on Canadian aluminum exports will hurt American producers and American consumers more than anybody ... we should not hesitate to retaliate."

Ken Neumann, executive director of the Canadian chapter of the United Steelworkers union, accused the federal government of bungling the U.S.-Canada trade file and urged Ottawa to take a hard line with the White House.

"If the U.S. does reimpose 232 tariffs on Canadian aluminum, Canada must impose retaliatory tariffs on a wide range of U.S. products — and not only on aluminum," he testified.