An emergency dispatcher picks up a call from a mother who says her adult son is angry and breaking things at home, but he may not react well to police officers. In most cities, armed officers would be first at the scene, but in Eugene, Ore.
Jul 9, 2020 3:00 AM By: Canadian Press 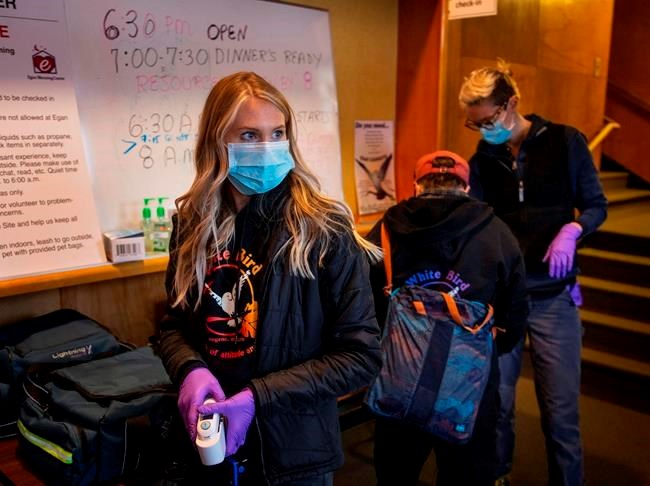 An emergency dispatcher picks up a call from a mother who says her adult son is angry and breaking things at home, but he may not react well to police officers.

In most cities, armed officers would be first at the scene, but in Eugene, Ore., there's another option called CAHOOTS, a community-based crisis intervention service that pairs medics with mental health specialists.

Crisis worker Ben Brubaker says on the day the mother called he was already working nearby and officers had yet to arrive.

He said the situation had calmed down by the time he called the woman and talked to her son.

"As the officers rolled up, I was able to just lean out the window and say, 'Hey, here's what I've got, here's my read of the situation. This is my professional look at it. I feel comfortable going in.' "

Brubaker is the co-coordinator of the White Bird Clinic, home to CAHOOTS, a tongue-in-cheek name that stands for crisis assistance helping out on the streets.

After the mother's call, police remained nearby, but unarmed, plain-clothes CAHOOTS staff resolved the matter, he said.

The program started after people in the community expressed feeling alienated from police and health-care providers, and wouldn't seek help because they were scared, said Brubaker.

Today, about 40 staff operate two vans in Eugene and neighbouring Springfield, 24 hours a day, seven days a week. A third team is on duty during peak hours.

They handle a range of calls related to mental health and substance use, including so-called welfare or wellness checks, as well as primary assessments and wound care.

White Bird Clinic says there are estimates that between 20 and 50 per cent of fatal encounters with police in the United States involve someone experiencing mental illness. Thirty per cent of its clients live with severe and persistent mental illness and more than 60 per cent are homeless.

Staff come to CAHOOTS with years of experience and receive 500 hours of training that emphasizes non-judgmental approaches to de-escalation and harm reduction.

Interest in CAHOOTS, which started in 1989, has skyrocketed after recent protests against police brutality and growing calls for reform.

Brubaker said the clinic and local police have been fielding calls daily from law enforcement, activists and officials at different levels of government across the United States.

Police officers are "tired of being the de facto mental health response and being charged with picking up the broken pieces of our behavioural and physical health-care systems," said Brubaker.

"In some cases, those systems have been defunded over the course of decades, (forcing) the police department to be kind of a catch basin."

CAHOOTS helps ensure the right first-responders are dispatched to each situation, and that doesn't necessarily include a police officer, he said.

Skinner and Brubaker say skilled dispatchers are crucial to the program's success.

"You have highly trained call takers and dispatchers that are asking the right questions and triaging those calls and they're determining what the resource is that needs to go," said Skinner.

"So, when you're finally dispatching a CAHOOTS worker to a call, you can bet that it's already been vetted."

Police are sent if there's any sign of violence or a weapon, he said, but officers communicate with CAHOOTS and may adjust their response as situations unfold.

Dispatch protocols are continually updated, said Brubaker, adding the high level of trust and communication between CAHOOTS staff and police has taken time to build.

The annual budget for CAHOOTS is about US$2.1 million, the bulk of which comes from local police.

Some police departments and RCMP detachments in Canada have mobile crisis intervention units that pair an officer with a nurse, but the officers are still the first to respond. There are community-based crisis intervention services too, but they're not dispatched through emergency call centres.

Last month, city councils in Vancouver and Toronto approved similar motions to look at community-based responses that aren't led by police to certain calls. Both of them referenced CAHOOTS as a model.