In The News is a roundup of stories from The Canadian Press designed to kickstart your day. Here is what's on the radar of our editors for the morning of June 2... What we are watching in Canada ...
Jun 2, 2021 3:15 AM By: Canadian Press 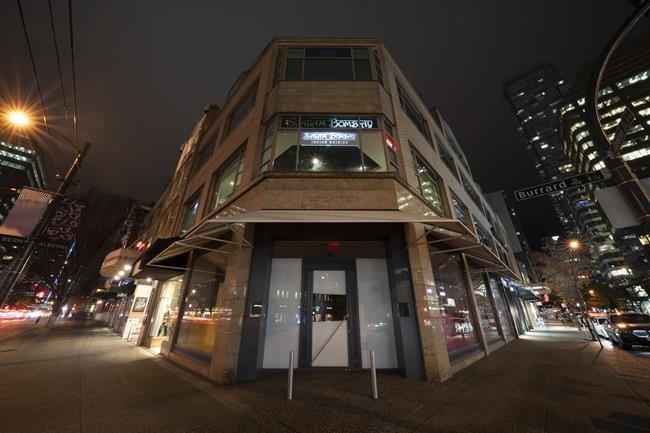 In The News is a roundup of stories from The Canadian Press designed to kickstart your day. Here is what's on the radar of our editors for the morning of June 2...

HALIFAX — Lisa Drader-Murphy opened her first store in 1997, and over more than two decades built her luxury clothing brand debt-free by reinvesting her earnings back into the business.

"I was raised with old-fashioned values," she said from her home in Falmouth, N.S. "You dig your heels in and you just get the hard work done. I haven't had to rely on government funding for anything."

But pandemic restrictions upended Drader-Murphy's retail business, repeatedly forcing the closure of her five stores, cutting off most of her income and pushing her into debt.

It's a situation that has already forced many businesses in Canada to permanently close and business groups are warning many more may not survive the summer as federal aid begins to phase out before the economy fully reopens.

Eliminating wage and rent subsidies before businesses are fully operational could unleash a wave of closures in the pandemic's final days, they say.

"Cutting back on subsidies prematurely when businesses are still closed or severely restricted is a recipe for disaster," said Corinne Pohlmann, senior vice-president of national affairs for the Canadian Federation of Independent Business.

The federal government has provided businesses with wage and rent subsidies and lockdown support during the pandemic. These measures have been extended to September but they'll begin steadily phasing out next month.

Katherine Cuplinskas, a spokeswoman for Finance Minister Chrystia Freeland, said in an email that Ottawa will continue to support small businesses through a new hiring program, business financing program and other measures.

While Pohlmann welcomes the hiring incentive, she said the wage and rent subsidies may still be required by some businesses past September given ongoing delays with provincial reopening plans.

Diane J. Brisebois, president and CEO of the Retail Council of Canada, said smaller merchants and non-essential retailers are being left behind.

"I think people would be shocked at the number of businesses that may not make it in the final days of the pandemic if more isn't done," she said.

Leanne Watson has wondered if she'd made a mistake getting the Oxford-AstraZeneca COVID-19 vaccine in early May — and if she'd have the option to take a different jab the second time around.

While the Halifax resident trusted the science, she said news of extremely rare but serious blood clots associated with AstraZeneca made for an anxious four weeks. Watson said her worries subsided as time went on, but she added she'll probably choose another vaccine for her second shot.

Canada's National Advisory Committee on Immunization said Tuesday that AstraZeneca recipients will be able to opt for either the Pfizer-BioNTech or Moderna product as their second dose.

But data from a larger study from the United Kingdom is not expected until later this month, according to the University of Oxford.

"I wish it was more clear, but I do trust the scientists and I believe there's people working really hard to figure it out," Watson said. "So if ... they say it's OK to mix, I'm probably going to go with that."

NACI says those who received Pfizer or Moderna can also swap for the other mRNA jab if necessary, but encourages people to stick with the original brand.

Dr. Allison McGeer, an infectious disease consultant at Toronto's Mount Sinai Hospital, said all of the authorized COVID-19 vaccines serve the same purpose on a microbiological level — by showing the immune system how to recognize the coronavirus's spike protein, which latches onto cells when people become infected.

The mRNA and viral vector technologies each use different methods of getting to that endpoint, she said, but both get there.

"So there's no reason to think that there would be an issue with mixing vaccines," McGeer added.

TULSA, Okla. — US President Joe Biden has marked the 100th anniversary of the massacre that destroyed a thriving Black community in Tulsa, declaring he had “come to fill the silence” about one of the nation’s darkest — and long suppressed — moments of racial violence.

“Some injustices are so heinous, so horrific, so grievous, they cannot be buried, no matter how hard people try," Biden said Tuesday. “Only with truth can come healing.”

Biden's commemoration of the deaths of hundreds of Black people killed by a white mob a century ago came amid the current reckoning in the United States on racial justice.

“Just because history is silent, it does not mean that it did not take place," Biden said, adding "hell was unleashed. Literal hell was unleashed.” And now, he said, the nation must come to grips with the following sin of denial.

"We can’t just choose what we want to know, and not what we should know," said Biden. “I come here to help fill the silence, because in silence wounds deepen.”

After Biden left, there was a spontaneous singing by some audience members of a famous civil rights march song, “Ain’t Gonna Let Nobody Turn Me Around."

In 1921 — on May 31 and June 1 — a white mob, including some people hastily deputized by authorities, looted and burned Tulsa's Greenwood district, which was known as “Black Wall Street."

On Tuesday, the president, joined by top Black advisers, met privately with three surviving members of the Greenwood community who lived through the violence. Viola “Mother” Fletcher, Hughes “Uncle Red” Van Ellis and Lessie “Mother Randle” Benningfield Randle are all between the ages of 101 and 107.

As many as 300 Black Tulsans were killed, and thousands of survivors were forced for a time into internment camps overseen by the National Guard. Burned bricks and a fragment of a church basement are about all that survive today of the more than 30-block historically Black district.

CANBERRA, Australia — A ransomware attack on the world's largest meat processing company is disrupting production around the world.

JBS SA of Brazil notified the U.S. of a ransom demand from a criminal organization likely based in Russia, White House principal deputy press secretary Karine Jean-Pierre confirmed Tuesday. She said the White House and the Department of Agriculture have been in touch with the company several times this week.

JBS is the second-largest producer of beef, pork and chicken in the U.S. If it were to shut down for even one day, the U.S. would lose almost a quarter of its beef-processing capacity, or the equivalent of 20,000 beef cows, according to Trey Malone, an assistant professor of agriculture at Michigan State University.

In a statement, JBS said the cyberattack affected servers supporting its operations in North America and Australia. The company said it notified authorities and engaged third-party experts to resolve the problem as soon as possible. Backup servers weren’t affected.

Malone said the disruption could further raise meat prices ahead of summer barbecues.

JBS didn't say which of its 84 U.S. facilities were closed Monday and Tuesday because of the attack. But a union official confirmed that two shifts at the company's largest U.S. beef plant, in Greeley, Colorado, were canceled Tuesday.

Some plant shifts in Canada were also canceled Monday and Tuesday, according to JBS Facebook posts.

TORONTO — Band members have had a hard time getting together, COVID-19 outbreaks have stalled filming and Ontario's third wave of the pandemic has postponed the big show twice.

But the 50th annual Juno Awards will air Sunday on CBC-TV and its digital platforms, say organizers, who hope the largely pre-recorded broadcast will serve as a beacon of hope for a Canadian music industry decimated by pandemic shutdowns.

"Nothing is going to postpone it one more time," says John Brunton, chairman and chief executive officer at Insight Productions, the longtime producer of the nationwide show.

Insight has been working with the Canadian Academy of Recording Arts and Sciences and the CBC to shoot performances in piecemeal fashion under ever-changing pandemic protocols.

The two-hour event was originally supposed to be held with an audience at Toronto's Scotiabank Arena in March. But a spike in case counts and Ontario's lockdown measures scuttled those plans, forcing organizers to reimagine it, postpone to May and then push again to June.

At one point Insight considered doing some kind of live show at the outdoor Budweiser Stage in Toronto, says Insight senior vice-president Lindsay Cox, but a risk assessment determined it was safer to shoot in different-sized locations on multiple days rather than everything happening on one day.

Still, COVID-19 outbreaks created challenges while filming segments for music's biggest night: the crew on a Calgary shoot had to be completely changed when some workers tested positive for the virus, while an outbreak in Iqaluit stalled production for two weeks.

Performers will include Justin Bieber, Jann Arden and the Tragically Hip paired with singer-songwriter Feist.

While Quebec indicated Tuesday it is open to searching the grounds of former residential schools for graves, if survivors and their families are in favour, a survivor of the largest school in the Maritimes says the search will continue for unmarked graves at the sprawling rural site north of Halifax.

Dorene Bernard, a Mi'kmaq elder, confirmed Tuesday that ground-penetrating radar was used at the former Shubenacadie Indian Residential school in April and December of last year, but no graves or human remains were found.

"But there is a lot of work to do because the school had a great big footprint — acres of land all along the river," said Bernard, a well-known academic and advocate for Indigenous rights. "We're looking at meeting with survivors in the fall to come up with a plan for those investigations."

Bernard said she felt devastated when she learned last week about the 215 unmarked burial sites found at a former residential school in Kamloops, B.C., but she made it clear she was not surprised by the grim discovery.

"I'm sure other survivors across the land who know the history and have lived that history would also hope this would bring credibility to their stories," she said in an interview.

In Quebec, Indigenous Affairs Minister Ian Lafreniere said his office has started reaching out to families, Indigenous leaders and his federal counterpart to discuss the possibility of conducting searches in the province.

He said he has seen no evidence that there are unmarked graves on the grounds of the six former residential schools that he identified as having operated in the province but could not exclude the possibility.

He said the province would wait for a green light from the families before proceeding.

"I want to make sure this is the intention, this is the willingness of the families. I don't want to impose anything," he said.

This report by The Canadian Press was first published June 2, 2021