'Be prepared and not scared:' Iqaluit locks down after reporting first COVID-19 case

IQALUIT, Nunavut — Nunavut's capital city is under a lockdown after detecting its first case of COVID-19 since the start of the pandemic.
Apr 15, 2021 2:20 PM By: Canadian Press 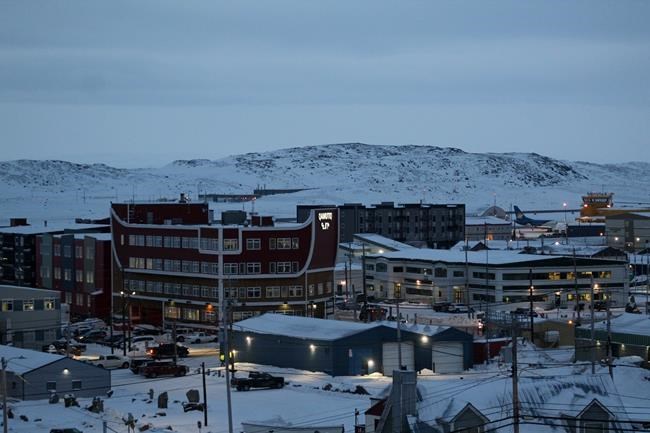 IQALUIT, Nunavut — Nunavut's capital city is under a lockdown after detecting its first case of COVID-19 since the start of the pandemic.

The infection was reported Wednesday night and on Thursday morning all schools, non-essential businesses and government offices in Iqaluit, a city of about 8,000 people, were closed.

Canadian North, Nunavut's main airline, has said the infected individual is one of its employees in Iqaluit. The company would not comment on the employee's role in the company.

Nunavut requires travellers to isolate for 14 days prior to entering the territory, but essential workers are exempt.

The territory's chief public health officer, Dr. Michael Patterson, said the person is an exempted worker who has been in the territory for 16 days and started showing symptoms two days ago. The person was tested Wednesday at Iqaluit's public health centre and the positive result came back about 8 p.m.

Given the timeline, Patterson said, it's possible the person contracted COVID-19 in Iqaluit.

"We're not certain how it got into Iqaluit ... they were already here for 13 or 14 days when the symptoms started, so it's not certain that they brought COVID into the territory."

It's Nunavut's only active case of COVID-19.

But Patterson said the city's public-health team has identified more than 10 people as contacts with the positive case and contact tracing is ongoing.

People from other communities who had been in Iqaluit and left the city on or after April 13 are also required to isolate for 14 days.

Patterson said businesses and workplaces in Rankin Inlet and the Baffin Island region can stay open with strict social distancing. Elementary schools in those areas can remain open at full capacity, but middle schools and high schools must move to a mix of in-class and at-home learning.

The Moderna vaccine is available to all Iqaluit residents 18 and up. To date, more than 3,400 people in the city have received a first dose and 2,000 have had two doses.

Premier Joe Savikataaq urged people who hadn't received the vaccine to get it as soon as possible.

"For months, we have been asking Nunavummiut to be prepared and not scared. Now is the time to prove that," Savikataaq said.

Patterson said a sample of the positive test is being sent to a southern lab to analyze for variants of concern, but results likely won't come back for a week.

A public hearing on Baffinland's expansion of its Mary River mine being held in Iqaluit this week has also been suspended.

The Nunavut Impact Review Board said residents from other communities in town for the hearing have been asked to isolate in their hotel rooms and wait for further instructions.

This report by The Canadian Press was first published April 15, 2021.

Ottawa to create new system to tackle delays in processing immigration applications
May 8, 2021 5:00 AM

Statistics Canada sees more demand to fill out census online during pandemic
May 8, 2021 5:00 AM