B.C.'s travel ban and Elliot Page's Oprah interview: In The News for April 30

In The News is a roundup of stories from The Canadian Press designed to kickstart your day. Here is what's on the radar of our editors for the morning of April 30 ... What we are watching in Canada ...
Apr 30, 2021 3:15 AM By: Canadian Press 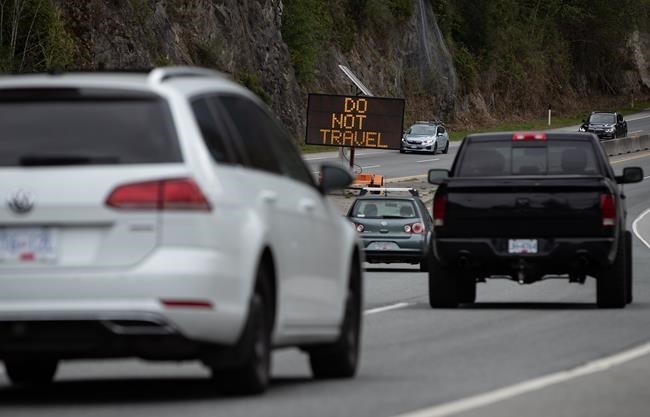 In The News is a roundup of stories from The Canadian Press designed to kickstart your day. Here is what's on the radar of our editors for the morning of April 30 ...

British Columbia's solicitor general is expected to announce more details today about enforcement of a travel ban aimed at reducing the spread of COVID-19,

Mike Farnworth, who is also the public safety minister, announced orders a week ago to limit non-essential travel between three regional zones until May 25.

He has said police will conduct periodic road checks at key travel points and violators could be issued $575 fines.

In Ontario today, the Long-Term Care COVID-19 Commission is to submit its final report to the provincial government.

The commission has examined what went wrong in the province's response to the first wave of the COVID-19 pandemic.

As of Thursday, 3,768 long-term care residents have died of COVID-19 in Ontario.

The commission interviewed a range of people and groups, from Long-Term Care Minister Merrilee Fullerton to doctors and personal support workers to family members of residents who were ill.

The report is to include recommendations on how the province can protect long-term care homes from any future pandemics.

OTTAWA — A strike at one of Canada's busiest ports could be coming to an end as the Senate prepares to deal with back-to-work legislation today that would force 1,150 dockworkers back on the job at the Port of Montreal.

The House of Commons approved the bill early Thursday morning, with the Conservatives joining forces with the minority Liberal government.

But it must still be passed by the Senate.

The Canadian Union of Public Employees, which represents the dockworkers, has said the dispute was sparked when the Maritime Employers Association began imposing extended workday hours without consulting workers.

The union says workers would have willingly returned to the job had the employer simply ended the scheduling practice.

It says it will challenge the legislation, which it described as unconstitutional.

WASHINGTON — The Pentagon is preparing for the possibility of Taliban attacks on U.S. and coalition forces during a withdrawal from Afghanistan.

This prospect complicates the outlook for winding down America’s longest war.

Pentagon press secretary John Kirby said, “We have to assume that this drawdown will be opposed."

He was explaining why Defence Secretary Lloyd Austin decided to keep an aircraft carrier in the Middle East during the pullout and to move Army Rangers and at least four B-52 bombers to Afghanistan as a precaution.

The Taliban have not said publicly whether they intend to interfere with the pullout.

JERUSALEM — Israeli medical officials say at least 44 people have been killed in a stampede at an overcrowded Jewish religious festival in northern Israel.

Tens of thousands of people, mostly ultra-Orthodox Jews, had attended the celebrations.

Witnesses say the stampede began when large numbers of people trying to exit the site passed through a narrow tunnel-like passage.

People began falling on top of each other near the end of the walkway, as they descended slippery metal stairs.

About 150 people were injured in what was described as one of the country's deadliest civilian disasters.

Then-prime minister Brian Mulroney and the premiers reached an agreement that would bring Quebec into the constitutional fold. Named after the government retreat near Ottawa where the deal was struck, the Meech Lake accord would have —  among other things — recognized Quebec as a distinct society. To become law, it had to be ratified by Parliament and all provincial legislatures by June 23, 1990. But the accord died when Manitoba and Newfoundland failed to approve it.

Elliot Page says he hopes sitting down with Oprah Winfrey for a one-on-one interview will help combat the "misinformation and lies" being spread through anti-transgender legislation.

In a Vanity Fair interview published Wednesday, the Halifax-raised actor says he feels a responsibility to use his platform to speak out against "devastating" rhetoric coming from anti-trans and anti-LGBTQ activists.

The 34-year-old actor told Vanity Fair those bills will be "responsible for the death of children," which is why he felt it important to speak about his experiences and the "resources I've been able to access — whether therapy or surgery — that have allowed me to be alive, to live my life."

Page's interview with Winfrey will debut today on her Apple TV Plus series "The Oprah Conversation."

The actor, who received an Oscar nomination for 2007's "Juno" and stars in "The Umbrella Academy" on Netflix, shared in December that he was transgender and used the pronouns he and they.

People who get a COVID-19 vaccine shot could experience a range of side-effects that some are calling a "vaccine hangover."

And health experts say there is no real way to predict who will experience it.

Many people may have a bit of pain and swelling in the area of the arm where they received the shot.

A recent study shows it is more likely in women, people under the age of 55 and those who have already been infected with COVID-19.

Joseph Blondeau, head of clinical microbiology at Royal University Hospital in Saskatoon, says people are also hyperaware of vaccinations right now and could be more likely to report symptoms.

Experts note that occasional side-effects are common among a lot of vaccines, not just the ones for COVID-19.