OTTAWA — The Trudeau government is adding a second heavy icebreaker to its plans for the Canadian Coast Guard, a move that will boost the shipbuilding industry in two key provinces for the Liberals — and which could come at a hefty cost to taxpayers.
May 6, 2021 2:47 PM By: Canadian Press 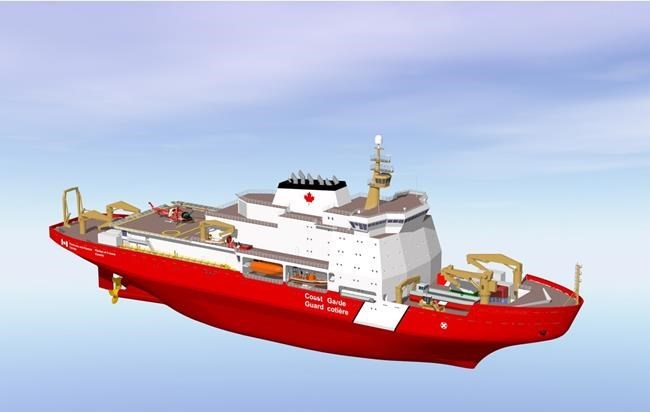 OTTAWA — The Trudeau government is adding a second heavy icebreaker to its plans for the Canadian Coast Guard, a move that will boost the shipbuilding industry in two key provinces for the Liberals — and which could come at a hefty cost to taxpayers.

Liberal cabinet ministers announced Thursday the government has doubled the number of heavy icebreakers it will build over the next decade, with Vancouver's Seaspan Shipyards and Quebec-based Chantier Davie being given one each.

Fisheries Minister Bernadette Jordan said the addition of a second vessel reflected the changing conditions in Canada’s increasingly accessible Arctic. Splitting the work between two yards, she added, was a prudent move to ensure both vessels arrive on time.

The surprise announcement followed nearly two years of questions — and intense lobbying from the shipyards — over Ottawa's plans for the CCGS John G. Diefenbaker.

First announced by Stephen Harper's Conservative government in 2008 and awarded to Seaspan in October 2011, the Diefenbaker was one of seven ships to be built by the Vancouver shipyard through Ottawa's multibillion-dollar shipbuilding plan.

The Diefenbaker was arguably the crown jewel of the package. Originally budgeted at $721 million, the icebreaker was supposed to be delivered by 2017 and replace the Coast Guard's flagship, the CCGS Louis S. St-Laurent.

But scheduling conflicts, technical problems and other issues scuttled the timeline and budget — which was increased to $1.3 billion in 2013 — before the Trudeau government quietly lifted the ship from Seaspan's order book in August 2019.

While Seaspan said it was determined to win the vessel back, Davie was considered its chief competitor. After losing out of the competition for work in 2011, the rival yard has since charged back and is now in line to build six medium coast guard icebreakers.

The Quebec company insisted it — not Seaspan — was best placed to build the Diefenbaker, particularly given it is already in line to build the other six icebreakers. The two rivals subsequently engaged in fierce lobbying campaigns to secure the work.

In the end, the Liberals took a page out of Oprah's book and gave each a new icebreaker.

Jordan defended the decision to split the work between the two shipyards, rather than give both icebreakers to one, as a prudent step given the pressing need to get the two vessels in the water as soon as possible.

The St-Laurent is currently scheduled to be retired in 2030 while the Coast Guard’s other heavy icebreaker, the CCGS Terry Fox, is set to follow suit in 2032.

“To expedite this work, both polar icebreakers will be built at the same time in two different Canadian shipyards,” she said.

Yet while the decision to split the work is also likely to end the at times bitter battle between Seaspan and Davie, it will almost certainly come with a hefty price tag.

The federal government has previously emphasized the savings that come with one shipyard working on multiple models of the same vessel, with the first vessel in a class costing much more and taking much longer than those that follow.

Liberal ministers refused on several occasions Thursday to provide any cost estimate or budget for the two icebreakers, saying such information would be provided at an appropriate time.

Senior civil servants, speaking at a briefing provided on condition of anonymity, did acknowledge, however, that the cost will exceed the previous $1.3-billion estimate for the Diefenbaker alone, which was first established in 2012 and has been under review for several years.

"As northern waterways become more accessible, some countries are trying to encroach on our sovereignty by signaling their economic interest in a region that may be rich in untapped natural resources," Environment Minister Jonathan Wilkinson said.

"So we simply can't put a price on the value of Canada maintaining its Arctic presence."

Opposition parties, meanwhile, accused the government of playing electoral politics ahead of a possible fall campaign.

The Conservatives and Bloc Quebecois Leader Yves-Francois Blanchet noted that the federal government has yet to finalize an agreement with Davie that would officially add it to the national shipbuilding strategy, and suggested Thursday's promise was empty words.

"After over a half-decade in government, the Liberals have re-announced that Seaspan Shipyards in Vancouver will be building a heavy icebreaker for the Canadian Coast Guard," said Conservative procurement critic Pierre Paul-Hus and fisheries critic Richard Bragdon.

"However, the announcement made by the Trudeau Liberals in no way guarantees that Davie Shipyards in Quebec will also get a contract to build a heavy icebreaker."

Davie was officially selected in December 2019 as the third shipyard in the strategy, after Seaspan and Halifax-based Irving Shipbuilding, which is slated to build the navy's next fleet of warships.

But talks between Ottawa and the Quebec yard around the amount of investments it must make into its facilities before the decision can be formalized — and it can start building actual ships — have yet to be complete.

Blanchet suggested until a contract with Davie is signed, Thursday's icebreaker announcement was "nothing but words" designed to protect the Liberals' electoral fortunes in Quebec and Vancouver.

Seaspan is located in Wilkinson's riding while Treasury Board President Jean-Yves Duclos's riding is near the Davie Shipyard in Levis.

The government insisted talks with Davie are proceeding, even as Wilkinson and other cabinet ministers denied that the decision to give an icebreaker to each yard was made with an eye on the coming election.

"It is critical that we get moving, and it's critical that we have the second one," Wilkinson said. "It isn't politics. This is about actually giving the men and women of the coast guard the tools they need to do the job."

Davie president James Davies welcomed Thursday's announcement, even as he said the company is waiting for specific details.

"We know the (icebreaker) can create thousands of jobs and have major long-term impacts on shipbuilding and the economies of Quebec and Canada," Davies said in a statement.

"We also fully agree with Canada that time is now of the essence. We must start the project without delay to ensure the (icebreaker) offers immediate, material and sustainable stimulus to the pandemic recovery."

This report by The Canadian Press was first published May 6, 2021.

Note to readers: This is a corrected story. An earlier version incorrectly reported that Treasury Board President Jean-Yves Duclos's riding contains the Davie Shipyard in Levis.