Courtney McCann was used to giving lectures in her classroom, not receiving them at her local convenience store.
Feb 28, 2020 12:34 PM By: Canadian Press 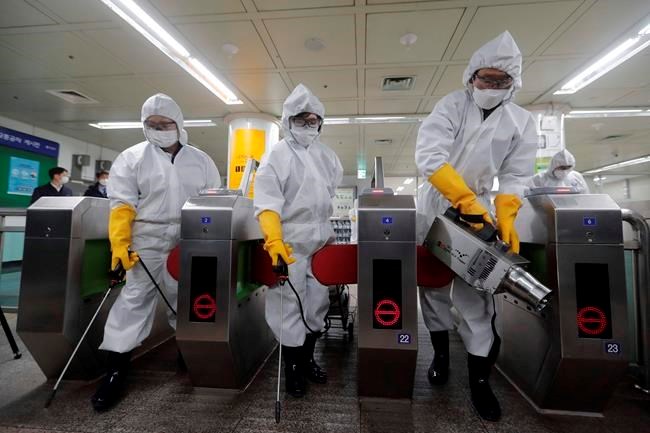 Courtney McCann was used to giving lectures in her classroom, not receiving them at her local convenience store.

But the sight of her ill-fitting mask turned the tables as she was browsing the near-deserted aisles on a recent visit, sparking fear in the man behind the counter, she recounted from her home in Changwon, South Korea.

The masks are considered by many to be a key defence in the battle against a coronavirus outbreak that's seen the number of Korean cases climb from 104 on Feb. 20 to more than 2,300 on Friday.

The too-big mask, which gaped around her narrow nose, wouldn't have drawn any attention days earlier, but things have changed drastically since then, said McCann, who moved from Victoria in November to teach English in the city on the southeastern coast of the peninsula nation.

"I got in trouble," she said. "I got lectured about it from the counter guy. He was serious. He was terrified."

Fear and suspicion have permeated the country as it became the site of the largest COVID-19 outbreak outside of mainland China, she said. But the terror has not spread to McCann or her boyfriend, who arrived in Changwon for a visit the day before the outbreak took off.

"We're both young adults, so it's not necessarily fatal for us," McCann said. "That's the big concern here — people being close to their older relatives and the older relatives catching it."

The effects are palpable, she said, colouring her every interaction with locals.

"This is usually really a close country. In Korea, people sit close together at restaurants and even on buses," she said. "But there has been more space. We went to go to lunch and people will sit on the opposite side of the restaurant."

No longer does she worry about avoiding the busy hours at grocery stores. Instead, the question is whether stores are even open: a department store near her apartment was shuttered for disinfection after it was revealed one of the patients had gone there, she said.

The academy where she teaches was shut down this week to prevent the spread, with teachers only going in to scrub down their classrooms.

Part of the fear, she said, seems to be borne from the genesis of the Korean outbreak.

A so-called "super spreader" attended crowded church services in the southeastern city of Daegu, even after doctors recommended she get tested for the virus, according to the Korea Centers for Disease Control and Prevention.

The Shincheonji church's leader claims to be an immortal angel of Jesus and the sect, which has 200,000 followers, is decried as a cult by other Christian groups.

Some 1,000 Shincheonji church followers who attended Sunday services with her in the southeastern city of Daegu were quarantined at their homes while authorities screened them for the virus. Health authorities were also trying to monitor thousands of others.

McCann said people tend not to trust the church's followers, worrying that they, like the woman accused of spreading the illness, will resist testing.

"At this point the stigma's almost become worse than the virus itself and just how people are acting around it," she said.

Changwon, where McCann lives and works, is roughly 70 kilometres away from Daegu, and to travel to the capital of Seoul necessitates crossing through that city.

That's waylaid McCann's plans with her partner, Nate Jankowski, who lives in Victoria. They had to cancel their planned trip to Seoul and haven't been able to explore Changwon like they had hoped.

"It's less of a vacation, more like being at home," Jankowski said, noting many tourist attractions in the city have closed.

"Most of the parks here have signs that are saying to avoid them and just stay home," he said. "Cruising around town, it's been really quiet."

Meanwhile, McCann and Jankowski are trying to look on the bright side.

"We have a dog with anxiety and he's anxious of cars," McCann said. "He's walking really well now, because there's just been such a reduction in the amount of traffic."

— with files from The Associated Press.