VANCOUVER — Stories of bravery, compassion and kindness are emerging after the horror of a stabbing rampage over the weekend, the mayor of the District of North Vancouver said Monday.
Mar 29, 2021 6:15 PM By: Canadian Press 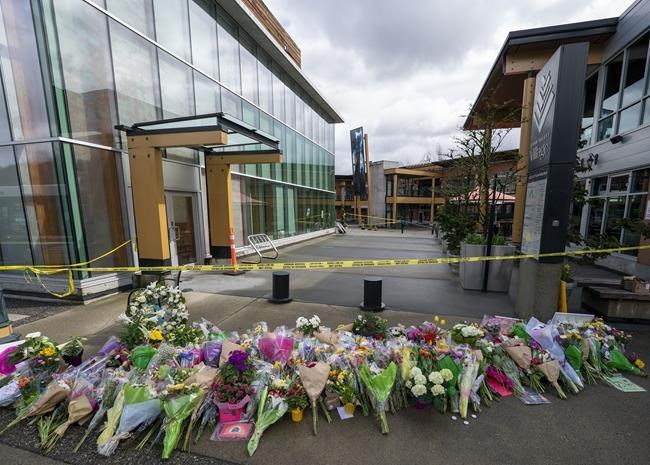 VANCOUVER — Stories of bravery, compassion and kindness are emerging after the horror of a stabbing rampage over the weekend, the mayor of the District of North Vancouver said Monday.

Mayor Mike Little said the community is shocked and saddened by the attack on Saturday that left one woman dead and six others injured.

"No one expects to be confronted with violence while going about their day in a civic plaza outside a library and just running their errands for the course of the day. It's an absolute shock."

Little said he's heard about restaurant staff helping the injured, strangers rushing to administer first aid and other acts of compassion and bravery that will be recognized in the coming months.

Yannick Bandaogo, 28, of no fixed address, was charged with second-degree murder on Sunday and remains in custody after undergoing surgery for self-inflicted wounds.

He was scheduled to appear in court via phone on Monday, but an RCMP officer said he refused to leave his cell to participate.

Michelle Tansey, the acting officer-in-charge of the Integrated Homicide Investigation Team, told a news conference Monday that five women and one man were injured in the attack. They range in age from 22 to 78 and police have said all are expected to survive.

Police have not named the woman who died, but said she was in her 20s.

Tansey said investigators are learning more about the suspect's background.

"The accused was unknown to any of the victims," she said.

He's wanted on warrants in Quebec and Winnipeg, but officers don't know why he was in North Vancouver or when he came to the West Coast, Tansey said.

There's no connection to any kind of radicalization, she said, adding police always consider the mental health of the suspect during such an investigation.

North Vancouver RCMP officer in charge Supt. Ghalib Bhayani said he is "incredibly saddened and outraged by the violence that took place" on Saturday.

"The Lynn Valley Library is a peaceful place, a place where the community comes together to learn and explore," Bhayani said.

The district has set up a wellness and community centre just blocks from the Lynn Valley Library that will be open for the next seven days to support the mental and emotional well-being of those affected.

Stacks of flowers, candles and notes of condolence were being dropped off by a constant stream of well-wishers outside the library on Monday.

"I’m having a lot of trouble trying to wrap my mind around it,” said Max Pietryzk, who grew up in the neighbourhood and visited the growing memorial Monday.

“You come here four or five times a week, it’s a safe place. There's a strong sense of community and you would never even imagine something happening here.”

Mark Pearmain, the superintendent of the North Vancouver School District, said in a statement Monday that one of the victims of the weekend attack is a teacher at Argyle Secondary School.

Pearmain said the teacher is expected to make a full recovery.

According to Quebec court records, a Yannick Bandaogo was living in Gatineau, Que., when failed to appear in court on two occasions last year, resulting in warrants being issued for his arrest.

The scheduled court appearances in July and September 2020 were in relation to alleged breaches of conditions imposed following previous infractions.

In September 2019, Bandaogo had pleaded guilty to assault with a weapon causing bodily harm.

A year earlier, Bandaogo was sentenced in October 2018 to one month in jail for assaulting a police officer and resisting arrest in Longueuil, Que., a suburb of Montreal. On the same day, he was also sentenced to four months for assault causing bodily harm and three months in connection with two other assault cases.

Alain Boismenu, the owner of a Longueuil boxing gym where Bandaogo trained for about a decade, said he was shocked when he found out his former student had been charged in a British Columbia attack.

“I just about fell off my chair,” Boismenu said of learning his former student had been charged.

“It’s not the same Yannick I knew at the gym, where we were a big family. We won together, we lost together.”

Boismenu said the young man was committed to boxing, sometimes coming twice a day to train. But he said he hadn’t seen Bandaogo for about three years and had been told through a mutual friend that he hadn’t been doing well.

This report by The Canadian Press was first published March 29, 2021.

— With files from Sidhartha Banerjee in Montreal