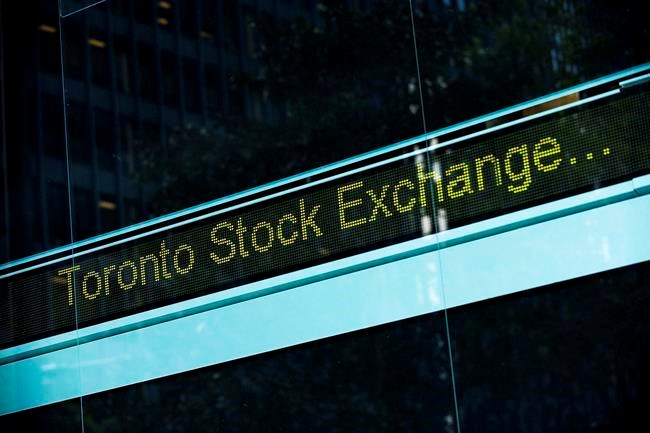 The heavyweight financials sector was hammered while eight of the other 11 major sectors on the TSX also fell.

Markets on both sides of the border were affected by The U.S. Senate's inability to approve a massive stimulus package for a second time, says Colin Cieszynski, chief market strategist at SIA Wealth Management.

"I think at this point, it's a confidence thing where people want to see some kind of decisive action from the government," he said in an interview.

The Federal Reserve has moved three times in the last three weeks, including Monday, to try and shore up markets, but politicians continue to fight among themselves about a fiscal backstop.

The Fed said Monday it would buy as many Treasuries and mortgage-backed securities as it takes to stabilize bond markets. That's beyond the US$700 billion in purchases announced last week.

"The fiscal side for businesses in the economy hasn't materialized and that seems to be dragging on confidence," Cieszynski said.

In New York, the Dow Jones industrial average was down 582.05 points at 18,591.93 after hitting an intraday low that wiped out all gains since Donald Trump was elected in 2016.

The growing number of confirmed COVID-19 cases and deaths in North America and the larger containment efforts in the last few weeks could also being weighing on market sentiment, Cieszynski said.

"In some ways it may be becoming more real for people than, say, it was a few weeks ago when this was happening overseas rather than here."

The Canadian dollar traded for 69.05 cents US compared with an average of 69.77 cents US on Friday.

Gold had its best day in more than a decade as investors turned to the traditional safe haven. The key materials sector gained 5.4 per cent as Semafo Inc. was up more than 32 per cent on a deal to combine with Endeavour Mining Corp.'s West African gold mining operations. Silvercorp Metals Inc. was up 31.6 per cent.

Technology was the only other sector to climb, rising one per cent as shares of Shopify Inc. were up 9.5 per cent.

Financials lost nearly eight per cent as Industrial Alliance Insurance and Financial Services Inc. fell 15.6 per cent and Brookfield Asset Management Inc. was off by 14 per cent.

Utilities was down 13 per cent with AltaGas Ltd. falling 22 per cent, while national grocery chains were weaker despite being exempted from massive forced closure. Empire Co. Ltd. was down nearly 15 per cent.

Industrials was pushed lower by a 32.8 per cent drop in NFI Group Inc. shares after the bus manufacturer announced the idling of a majority of its facilities for two weeks.

The day was marked by high uncertainty and volatility with market swings of 658 points in Toronto and 907 points on the Dow, said Cieszynski.

"And I expect that to continue. I can't really call a direction on this, but just to say that it looks like we're still in for more large swings in both directions and where it shakes out, it's hard to say."

This report by The Canadian Press was first published March 23, 2020.