MONTREAL — The blockage in the Suez Canal will further increase global shipping prices but will have a marginal effect on Canadian consumers, aside from potential delays for certain shipments, experts say.
Mar 29, 2021 4:11 PM By: Canadian Press 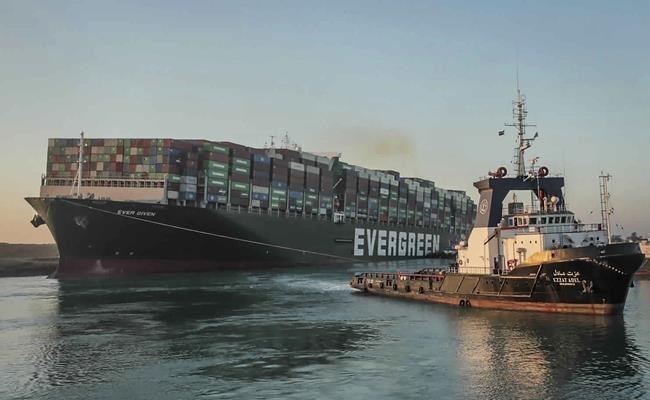 MONTREAL — The blockage in the Suez Canal will further increase global shipping prices but will have a marginal effect on Canadian consumers, aside from potential delays for certain shipments, experts say.

The situation is just the latest jolt to a global supply chain that already had been strained since the start of the pandemic, exacerbating a shortage in container space that has sent shipping prices soaring over the last year.

"I think the bigger issue will be delay," said Mary Brooks, a professor emerita at Dalhousie University's Rowe School of Business. "If you’re the Home Depot store in Toronto, and you’re waiting for a product for your shelf, and it was coming from Singapore through Suez, it might be a week or a week and a half later and your shelf could be empty."

Salvage teams on Monday freed the Ever Given, a massive container ship that became wedged in the side wall of the canal for nearly a week, blocking off traffic in one of the world's most vital waterways.

The blockage prompted some vessels to reroute around the tip of Africa and led to a backlog of at least 367 ships waiting to transit through the canal. The detour around the Cape of Good Hope adds 3,100 miles to ships' journeys and costs them hundreds of thousands of dollars in fuel and other costs.

Mark Szakonyi, executive editor of the Journal of Commerce, a publication that covers shipping and logistics, said the blockage in the canal couldn't have come at a worse time. Container shipping prices have more than doubled in the last year, data from Drewry Shipping Consultants Ltd. shows.

Still, while Szakonyi expects shipping prices to increase because of the delays, he said those costs likely won't be passed on to consumers any time soon.

"All of these things like port congestion, shipping delays, that's all putting upward pressure on the cost of materials and goods, so in that sense there are inflationary pressures there," Szakonyi said. "But they're not translating directly to the consumer, at least not in the short-term."

Some companies might reroute their shipments to the West Coast, leading to a potential increase in port traffic in Vancouver and Prince Rupert, B.C., Brooks said.

Szakonyi said the situation might also have an adverse impact on Canadian exporters' ability to ship their goods out of the country if container lines are prioritizing inbound cargo.

More than 10 per cent of global trade flows through the Suez Canal, including shipments from India, the Middle East and Southeast Asia to Canada, experts said. The six-day incident at the canal held up almost $60 billion of global trade, according to data from TD Economics.

"The long-term trade impact of these disruptions is likely to be small given that the global trade in goods amounts to $18 trillion a year," said Sohaib Shahid, senior economist at TD Economics. "However, the delays will have a domino effect, which will reverberate across global supply chains for weeks or months to come."

The Port of Montreal said traffic from Asia represents around 25 per cent of its trade, which reaches the city through both the Suez and Panama canals. Clothing, electronic products and construction materials are among the goods that enter the port from Asia, port spokeswoman Melanie Nadeau said.

—With files from The Associated Press

This report by The Canadian Press was first published March 29, 2021.