Strategize when ordering meal kits for one, families, picky eaters and special diets

TORONTO — For Jason Kucherawy, dinnertime requires serious organization. The Toronto tour company owner will try anything, his wife mostly sticks with a vegetarian diet but will eat chicken and their kids' tastes are anyone's guess.
Apr 15, 2021 10:08 AM By: Canadian Press 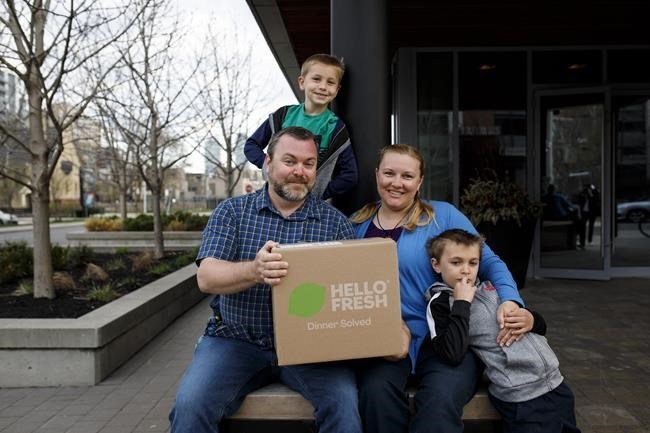 The Toronto tour company owner will try anything, his wife mostly sticks with a vegetarian diet but will eat chicken and their kids' tastes are anyone's guess.

"I always have a backup plan: a pot of macaroni and cheese on the stove," said Kucherawy.

But before he resorts to the backup plan, he often uses meal kits, which offer pre-portioned ingredients and recipes that can frequently be cooked in 30 minutes or less.

While the kits make cooking simple, arranging them for a family, a solo diner or those with dietary restrictions takes strategy — something more Canadians have discovered during the COVID-19 pandemic.

Twenty-two per cent of Canadians who purchased food like groceries or takeout online in 2020 also bought meal kits, up from 14 per cent in 2019, said Vince Sgabellone, an industry analyst for the NDP Group research firm.

Almost half of Canadians who bought food online plan to purchase a meal kit in the next six months, he said.

They'll have plenty to chose from as grocery chains like Loblaw and restaurants branching out during forced closures joined the meal kit trend during the pandemic.

Kucherawy encountered a plethora of options about two years ago, when he tried his first meal kit, Chef's Plate.

He usually toggles between Chef's Plate, Hello Fresh, Good Food and some local options, depending on which menu his kids like best or is offering savings that week.

He's found most meal kits cost between $70 and $80 a week for three meals of two servings each. Many services will provide meals for either two or four, which means those ordering for one or families with more than four members must do some extra planning.

While Kucherawy's family has four members, he doesn't order meals for all of them because he never knows when a picky eater will strike.

"If I were to order for four people, there's a chance that I'd be stuck with something that I would have to eat four portions of, so I generally just buy meal kits for two," he said.

He often finds two meals are enough to cover the whole family, if he and his wife each eat two-thirds of a portion and give the remainder to the kids.

If the kids aren't appetized, he cooks them something else, but if they're sure to eat a particularly successful kit meal, he stretches it with extra ingredients.

"I'll go and buy an extra chicken breast or two... and if it's a rice dish, then I'll tweak the recipe and add some more of my own rice," he said.

Becky Brauer, a co-founder of Fresh Prep, knew others with strategies like these, so her B.C.-based meal kit company sells extra servings of protein for between $4 and $9.

While there are meal kits geared towards kids or services that offer options just for children, the approach families take with other meal kits is often based on age.

"With a younger child like a toddler, you're OK with still just ordering a two-serving plan," said Brauer. "Then when you get into older kids or kids that need actually a portion of your serving size, we see families sort of scaling up."

Meanwhile, many who order for one embrace leftovers.

"These clients like to order the two-servings plans, so then they're cooking once, but they're eating multiple times from that meal," Brauer said.

To determine which meal kit is the best fit, Kieran Alkerton suggested using online reviews or seeking first-time order discounts, which companies frequently offer on social media or their websites.

"You can spend a good six to eight weeks just having very discounted meal kits," said the founder of Crisper Kits, a Toronto-based meal kit service that reduces waste by using reusable containers.

Alkerton recommended people with dietary restrictions or preferences use that period to examine how accommodating a service is before locking into a subscription.

Meat eaters, for example, often find they have 20 options, while those who are vegetarian or vegan sometimes only have four or five, he said.

"And I'm making things I wouldn't think of on my own," he said. "I can confidently say I'm a good cook now and wear my apron with pride."

This report by The Canadian Press was first published April 15, 2021.