TORONTO — Canada's main stock index had its worst day in nearly a month and the loonie hit a seven-week low as investors continued to react to the U.S. Federal Reserve's commentary about interest rates increasing sooner than expected.
Jun 17, 2021 3:51 PM By: Canadian Press 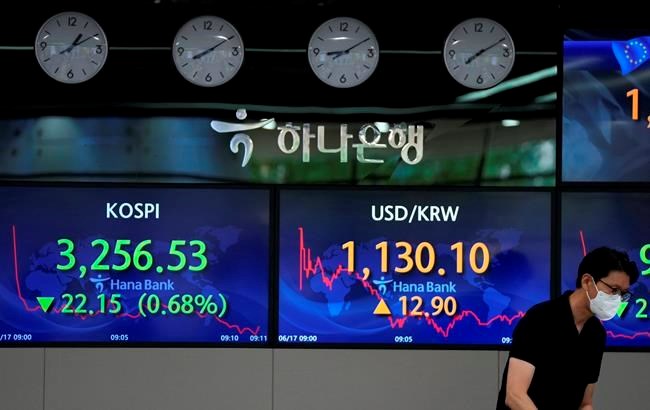 TORONTO — Canada's main stock index had its worst day in nearly a month and the loonie hit a seven-week low as investors continued to react to the U.S. Federal Reserve's commentary about interest rates increasing sooner than expected.

"After the Fed meeting yesterday the market did take a downturn ... and people had overnight to digest it and they're continuing on that track," said Michael Currie, vice-president and investment adviser at TD Wealth.

Commodities took the biggest hits as lower prices and a stronger U.S. dollar hurt both the materials and energy sectors.

"People in those markets are perceiving that it was a hawkish statement by the Fed yesterday so we saw some pretty good and quick declines in both of those," he said in an interview.

In addition to moving up when it expects rates will rise, the U.S. central bank said Wednesday that it expects two quarter-point increases in 2023.

The bank's commentary pushed up the U.S. dollar and caused the Canadian dollar to lose one cent Thursday, falling to 81.03 cents US compared with 82.03 cents US on Wednesday.

Gold and copper prices both dropped, pushing Yamana Gold Inc. down 7.8 per cent as the materials sector was 3.9 per cent lower.

Crude prices fell despite a drop in U.S. inventories last week to push energy off 4.4 per cent.

Technology had the strongest performance on the day, climbing 3.6 per cent as shares of Lightspeed POS Inc. gained 7.5 per cent, Shopify Inc. was up 7.2 per cent and BlackBerry Ltd. rose 5.3 per cent despite objections from some investors toward its executive compensation.

"There's definitely some big bets being made and covered after yesterday's (Fed) meeting," said Currie, noting some rebalancing back to growth from value sectors that have been strong in 2021.

The reaction by investors depends if they have short- or long-term horizons, he said, noting that interest rates will be rising, but that won't happen for two years.

"Short-term it's not bad news but long-term the inevitable is coming."

This report by The Canadian Press was first published June 17, 2021.