TORONTO — The parent company of Tim Hortons saw daily sales fall by more than 40 per cent in the last two weeks of March as the COVID-19 crisis began to take hold in Canada, but has since regained some momentum as it shifted more restaurants to servi
May 1, 2020 10:00 AM By: Canadian Press 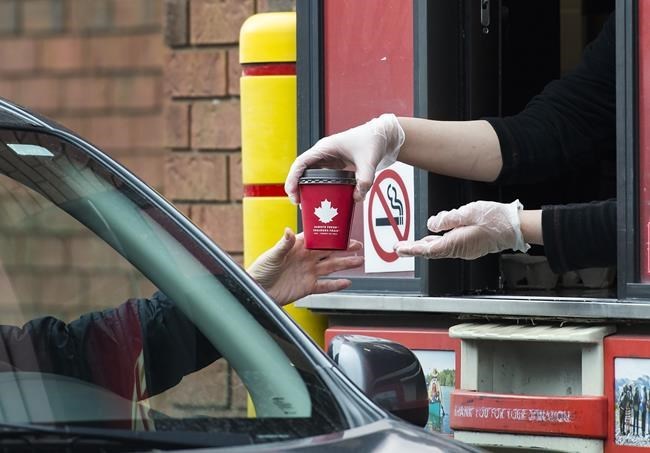 TORONTO — The parent company of Tim Hortons saw daily sales fall by more than 40 per cent in the last two weeks of March as the COVID-19 crisis began to take hold in Canada, but has since regained some momentum as it shifted more restaurants to serving food through delivery.

"The COVID-19 pandemic has obviously introduced a wide variety of challenges, but we feel we're well positioned and have the resources we need to come through this," said Jose Cil, chief executive at Restaurant Brands International Inc., during a conference call with analysts after the company reported its first-quarter financial results.

The company, which also owns Burger King and Popeyes, saw system wide sales fall at two of its brands during the first quarter ended March 31.

Tim Hortons saw a 9.9 per cent decline in the quarter, while Burger King experienced a three per cent drop. Popeyes saw a 32.3 per cent jump thanks in part to the popularity of its chicken sandwich in the U.S.

Comparable sales, a key retail metric, fell 10.3 per cent at Tim Hortons with a 10.8 per cent drop in the Canadian market.

In the last two weeks of March, daily comparable sales at the coffee-and-doughnut chain fell on average by roughly 45 per cent, the company said.

Much of this came from a fall in purchases in the breakfast and snacking categories, Cil said, as customers upended their daily routines in an effort to stay home. That means students heading to school, parents dropping off their kids or employees commuting aren't stopping by Tim Hortons for their usual order.

"You can see that, that day part in particular is the one that's most impacted because it's so routine based and frequency based," he said in an interview following the call.

The lunch and dinner categories have seen more strength, he noted, adding that trend holds for all of the company's businesses.

Additionally, the company is used to sales picking up on Thursday and into the weekend, he said, but now experiences the strongest performance on weekdays.

The company worked within the constraints of COVID-19 regulations, which prompted some restaurants to close temporarily and others to shutter dine-in services, and focused on expanding its delivery business.

More than 1,000 Tim Hortons restaurants in Canada now offer delivery, he said — up from about 250 less than two months ago. The company is continuing to add more Canadian restaurants into its delivery roster.

"It's a bigger meal-driven type of experience," said Cil, adding while there's opportunity to sell beverages and baked goods through this channel, the natural, initial push has been for lunch and dinner items.

"On the back of these initiatives, we spurred a positive trend in daily comparable sales growth," said Cil during the call.

At the end of April, the company saw daily comparable sales at Tim Hortons fall on average by nearly 40 per cent, he said — "a more than 10-point improvement from the lowest level we saw in late March."

The company noted about 75 per cent of its restaurants around the world remain open — though many with limited service models. In Canada, roughly 85 per cent of the company's Tim Hortons restaurants are open, with many of the temporary closures at locations in universities or within malls.

"We know that the full reopening of all of our restaurants and service modes will take some time yet, but we're encouraged by early signs of improvement in sales trends across many of our major markets," he said.

Analysts on average had expected a profit of 51 cents per share and US$1.23 billion in revenue, according to financial markets data firm Refinitiv.

Companies in this story: (TSX:QSR)