MONTREAL — The Port of Halifax said it is monitoring the situation after a skyscraper-sized container ship ran aground in Egypt's Suez Canal, potentially disrupting shipments from Asia to Montreal and Halifax.
Mar 24, 2021 4:14 PM By: Canadian Press 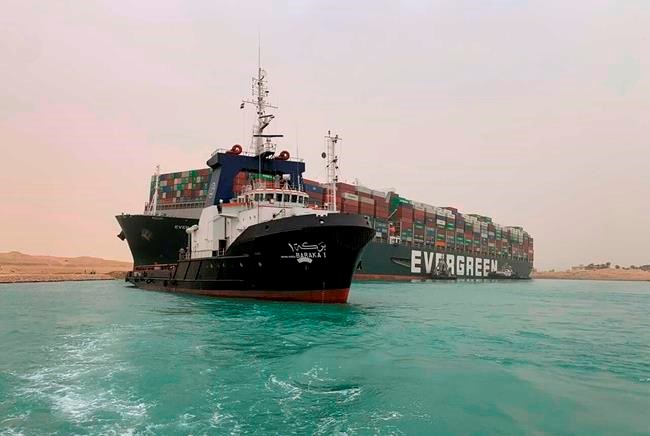 MONTREAL — The Port of Halifax said it is monitoring the situation after a skyscraper-sized container ship ran aground in Egypt's Suez Canal, potentially disrupting shipments from Asia to Montreal and Halifax.

The Ever Given, a Panama-flagged ship that carries cargo between Asia and Europe, became wedged across the waterway on Tuesday, blocking traffic in one of the world's most vital corridors for international trade.

"If it's a short shutdown, it wouldn't be that much different than a major weather event," said Lane Farguson, a spokesman for the Port of Halifax. "The longer the delay, then the more things back up."

The port is a major recipient of manufactured goods from Asia that transit through the Suez Canal, Farguson said, but he added that it is still too early to tell what the impact of the shutdown will be on its operations.

The Port of Montreal didn't respond to a request for comment.

Although the majority of cargo from Asia travels to Canada via the Pacific Ocean, there is a portion that comes through the Suez Canal, said Johanna Stroex, a spokeswoman for Hapag-Lloyd AG, one of the largest operators of container ships.

Goods transported to Canada along those routes are mainly retail and consumer goods, Stroex said.

Nicolas Poirier-Quesnel, a spokesman for the St. Lawrence Seaway Management Corporation, which oversees the waterway connecting the Atlantic Ocean with the Great Lakes, said wind energy components from Southeast Asia pass through the seaway.

Still, the organization expects a minimal impact from the shutdown, since the majority of the cargo passing through the St. Lawrence Seaway originates from Europe, North Africa and the Mediterranean and does not pass through the canal, Poirier-Quesnel said.

It is unclear when traffic in the Suez Canal will return to normal. An Egyptian official said Tuesday that efforts to refloat the ship stuck in the canal are underway and will take at least two days.

Evergreen Marine Corp., the Taiwan-based shipping company that operates the ship, said in a statement that the Ever Given had been overcome by strong winds as it entered the canal from the Red Sea but none of its containers had sunk.

The blockage is the latest to affect mariners and travellers amid the pandemic. Hundreds of thousands have been stuck aboard vessels quarantined due to the pandemic. Meanwhile, demands on shipping have increased, adding to the pressure on tired sailors, said Salvatore R. Mercogliano, a former merchant mariner and associate professor of history at North Carolina’s Campbell University.

“It’s because of the breakneck pace of global shipping right now and shipping is on a very tight schedule,” he said. “Add to it that mariners have not been able to get on and off vessels because of COVID restrictions.”

A collision between two vessels in July in the Welland Canal, a key shipping route in the Niagara Region, resulted in minimal delays to shipments in Canada, the St. Lawrence Seaway Management Corporation said.

The Suez blockage comes as ongoing labour negotiations between longshore workers at the Port of Montreal and their employer threaten to disrupt shipments to the city if the parties don't reach an agreement. The longshore workers' union voted this week to reject the employer's latest offer, but said it does not intend to submit a strike notice for the time being.

—With files from The Associated Press

This report by The Canadian Press was first published March 24, 2021.