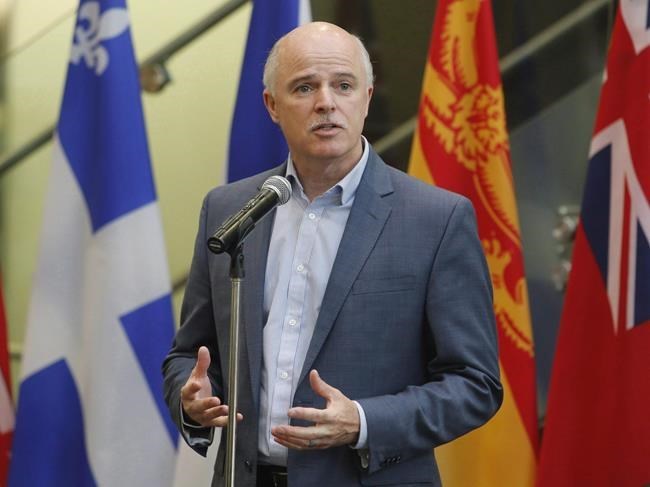 ST. JOHN'S, N.L. — Newfoundland and Labrador's financial picture looks increasingly bleak, a fiscal update released Thursday reveals, and the province's finance minister says help from Ottawa will be necessary to get through the challenging period ahead.

The province reported a net debt of $14.2 billion, up from $13.95 billion in December, at a fiscal update presented Thursday.

The reported deficit had risen to more than $1.1 billion, up from $522 million presented in the 2019 budget.

That's without accounting for cash from the federal-provincial agreement known as the Atlantic Accord, which will direct funds from Ottawa's shares in the Hibernia offshore oil field to the province over decades.

Projected revenue for the fiscal year ending on March 31 fell short by $690 million, due to a drastic drop in oil prices, offshore oil production shutdowns, pandemic-related closures and a January snowstorm that required extensive shutdowns in several municipalities.

But Finance Minister Tom Osborne warned Thursday that the worst impacts of the pandemic are yet to come for the province, which was already facing economic troubles.

Osborne said falling oil prices and other impacts from the COVID-19 pandemic, including unemployment and business closures, will impact the budget for the year, expected before Sept. 30.

"The path forward is going to be difficult, and we can't cut and tax our way out of this," Osborne said in St. John's.

"This would have a devastating effect on the people of the province and on our prospects for economic recovery."

Osborne said the current economic challenges have made the Liberal government's goal of balancing the budget by 2023 impossible.

Oil revenues projected at $1 billion fell short by $181 million. With production shutdowns and oil prices projected to remain low, Osborne said the province would be "lucky" to see $500 million in oil revenues over the next fiscal year.

He said more borrowing will likely be necessary to make up the difference.

"We are not asking for a handout, we are asking for fairness," he said.

Osborne noted Thursday that the province is still facing challenges with cost overruns from the Muskrat Falls dam, which has essentially doubled in cost to more than $12.7 billion since it was sanctioned in 2012 and represents about one-third of the province's debt.

In March, Premier Dwight Ball wrote to inform Prime Minister Justin Trudeau that the province had struggled to borrow money due to collapsing revenue sources from the offshore sector and the province's resource-based economy.

Ball later said that moves by the Bank of Canada to support provincial funding markets allowed legislators to authorize a borrowing capacity of $2 billion. As of Thursday, Osborne said the province had borrowed $1.2 billion, or about 60 per cent of the limit.

Progressive Conservative finance critic Tony Wakeham said the "significant drop in revenues" caught his attention, as well as the $1.2 billion already borrowed in the first six months of 2020.

"Now we have a revenue problem compact to go with our expenditure problem, so it's a bit of a double whammy," Wakeham said by phone. "Certainly there's going to need to be some review of how we're doing things and why we're doing them."

He said more clarity is also needed on the government's economic recovery plan, so businesses can plan accordingly and get the economy moving.

Economist Wade Locke, a professor at Memorial University of Newfoundland, said there were no surprises in the update that he called a "manifestation" of long-standing fiscal problems.

Locke said a well thought-out, realistic plan is necessary to try and bring expenditures back in line, something he said the current government has shown little imagination for.

"It looks like our approach is that we will go back to the federal government and they will help us, with little consideration to what we can do ourselves," Locke said in a telephone interview.

He said it's not an ideal situation for a government that's poised for an imminent change-over, with the election of a new Liberal Party leader to replace Ball as premier set for August.

Locke said a realistic economic plan will be challenging for people, but he noted that the government's response to the coronavirus pandemic shows how policymakers can bring people on board with dramatic but necessary changes to get through a crisis.

"People bought in that COVID is a problem — that it is all of our problem," Locke said.

"If we had the same degree of enthusiasm for the economic and fiscal crisis, we could deal with that."