REGINA — Saskatchewan's Opposition on Monday questioned the flow of information from the government about a COVID-19 outbreak at a hospital just as the province was preparing to loosen restrictions intended to limit the spread of the illness.
May 4, 2020 5:56 PM By: Canadian Press 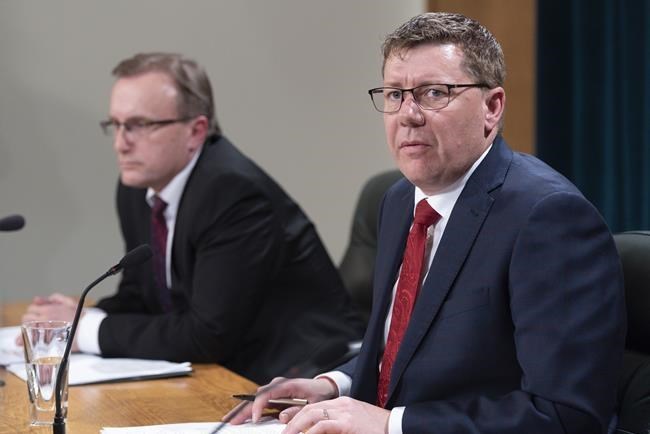 REGINA — Saskatchewan's Opposition on Monday questioned the flow of information from the government about a COVID-19 outbreak at a hospital just as the province was preparing to loosen restrictions intended to limit the spread of the illness.

NDP Leader Ryan Meili said he wants to know when the health minister was told about a cluster of cases at the hospital in the Saskatchewan-Alberta boundary city of Lloydminster.

The Saskatchewan Health Authority has apologized for not informing the public and local officials about the outbreak sooner.

The authority said it informed the Ministry of Health a couple of days before the outbreak was made public on Wednesday. Health Minister Jim Reiter said he was told the night before and talked to Premier Scott Moe the next day.

By that time, 13 staff members and patients had been infected, health officials said.

Meili said the public deserves answers about an apparent breakdown in communication.

"I don't see how ... in the midst of a pandemic, which is all hands on deck, in which everyone is watching every single case across the province, how a new outbreak in a health-care facility, at a time when we're talking about reopening a lot of businesses and other services, how that could possibly not make it's way to the minister," said Meili.

Reiter said things could have been done quicker.

"I'm just not prepared to throw ministry officials under the bus," he said. "Certainly I'll accept some responsibility. Could it have been done more timely? Yeah, it certainly could have."

The province announced 34 new cases of COVID-19 on Monday, its largest increase in a single day. Of the new cases, 29 were from in and around La Loche, a northern Dene village experiencing an outbreak.

The province's chief medical health officer, Dr. Saqib Shahab, has said while the number of cases in the far north is concerning, they are mainly isolated to La Loche. The increase in infections was to be expected as door-to-door testing and contact tracing ramped up, he said.

Despite the case count, Saskatchewan pushed ahead Monday with the first stage of its reopening, which included medical offices such as dental clinics, optometrists and physiotherapists.

"It honestly feels really nice," said Alison Matsyk, a physiotherapist in Regina and partner at Stapleford Health and Rehab Centre.

"You can already tell that there's a sense of relief from people being able to access it again because there's a lot of people out there that have that need.

"It brings a little more of that feeling of normal coming back."

Because of the outbreaks, La Loche and Lloydminster weren't included in the first phase of the plan.

"We see a number of provinces that are moving quite more rapidly than Saskatchewan in opening a wider suite of businesses and services in their communities," he said.

"That is why we left a number of weeks between Phase 1 and Phase 2, and that's why we have not yet set a date for Phase 3, so that we can react to anything."

Several weeks ago, residents in the region weren't practising physical distancing to the same extent they are now, the premier said.

"Physical distancing was starting to become commonplace in many places throughout the southern areas of the province. In many cases it had not quite made it's way through to the most rural and remote communities in this province."

Units to be used for self-isolation are being sent to La Loche as are more conservation officers to help, Moe said.

This report by The Canadian Press was first published May 4, 2020