OTTAWA — Canada's top central banker says monetary stimulus on the scale that the country is seeing now must ultimately reach the average Canadian to help an economic recovery from the COVID-19 crisis.
Apr 30, 2020 4:52 PM By: Canadian Press 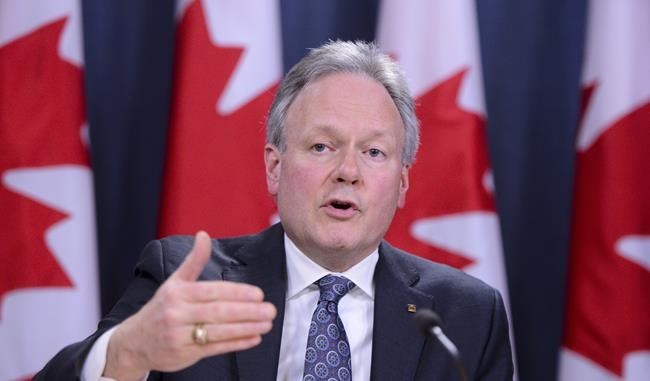 OTTAWA — Canada's top central banker says monetary stimulus on the scale that the country is seeing now must ultimately reach the average Canadian to help an economic recovery from the COVID-19 crisis.

But for the recovery to really take off, stimulus actions need to "reach the ultimate borrower," Poloz says.

In the text of his speech posted online, Poloz points to how longer-term mortgage rates were "sticky" after the Bank of Canada lowered its target overnight rate "because banks were still funding themselves at relatively steep rates in bond markets."

Speaking to the Ivey School of Business in London, Ont., today, Poloz recalls the significance of the economic shock hitting him during a global meeting of top central bankers on March 8, where governors from China, Italy and South Korea detailed their experiences.

"I also attended a memorial service for a friend later that day. That was my last social activity, and we were afraid to shake hands or touch the food," Poloz says.

"I will always recall my dear friend Jim’s memorial service as the moment when the penny truly dropped."

Since that time, the central bank has cut its key interest from 1.75 per cent to 0.25 per cent, which is essentially as low it can go. It has also undertaken an unprecedented bond-purchasing program to pump liquidity in financial markets.

The bank has also resisted putting any specific numbers on its outlook for the economy, citing the uncertainty around how soon public health officials can contain the pandemic. Poloz says comparisons to past downturns are "unhelpful, for they use arithmetic to compare various events that had very different effects on people."

He says the situation today is more akin to a natural disaster than a depression with fiscal policy in place "to essentially stop the clock and later restart" the economy.

Poloz says the central bank will keep a close eye to avoid rapid inflation during a recovery.

"We are alert to this risk and have the tools to respond should it materialize. But at present we see the risk of disinflation as more immediate," he says.

This report by The Canadian Press was first published April 30, 2020.