CALGARY — A partner in a project designed to allow more oilsands bitumen to be shipped by rail from Canada to Texas says the US$25-billion merger of Canadian Pacific Railway Ltd. and U.S.
Mar 23, 2021 2:33 PM By: Canadian Press 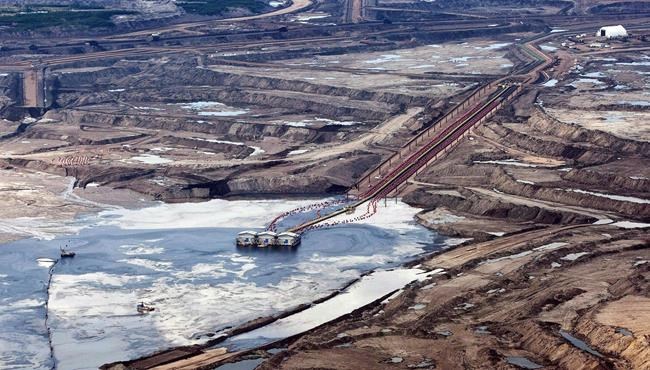 CALGARY — A partner in a project designed to allow more oilsands bitumen to be shipped by rail from Canada to Texas says the US$25-billion merger of Canadian Pacific Railway Ltd. and U.S. rival Kansas City Southern announced Sunday promises to provide new benefits.

“Both Canadian Pacific and Kansas City Southern were instrumental in making the diluent recovery unit (DRU) and DRUbit-by-rail (DBR) a reality,” said Albertson in an email.

“We fully expect that the combination of the two railroads will only strengthen their support for this new source of bitumen, which offers operational, safety and environmental benefits when compared with available alternatives.

"A unified network with a single DBR carrier should result in additional benefits to all parties, both now and in the future.”

Diluent is light oil which is mixed with sticky, heavy bitumen from the oilsands to allow it to flow in a pipeline. It makes up as much as a third of the volume of blended bitumen so reducing diluent increases overall bitumen export capacity.

The project by USD Group and partner Calgary-based Gibson Energy Inc. is designed to remove most of the diluent from oil transported by pipeline to Hardisty, allowing transfer of the concentrated heavy crude to railcars for shipping south, while the diluent can be recycled back to Alberta oilsands producers.

CP Rail spokeswoman Salem Woodrow said in an email the rail merger will create benefits across all lines of business.

"For energy specifically, CP's focus will be to leverage the diluent recovery unit at Hardisty ... which will create an even safer, non-hazardous, pipeline-competitive way of delivering Alberta energy products to market by rail," she said.

CP's crude by rail revenues are about five per cent of the total and KCS is even lower, at about two per cent.

The rail merger is expected to close in mid-2022 if it gets shareholder and regulatory approvals.

Most of Western Canada's crude-by-rail is shipped by Canadian National Railway Co. because its east-west main line runs through Edmonton and is closer to the oilsands of northern Alberta.

However, CP Rail connects with an oil-loading terminal operated by USD Group and Gibson at Hardisty.

In conjunction with the DRU project, USD Group is building a new oil unloading terminal at Port Arthur, Texas, to receive and distribute the Canadian oil or "DRUbit" — with the terminal served by a KCS rail line.

Last month, Gibson CEO Steve Spaulding said U.S. President Joe Biden's cancellation of the Keystone XL oil pipeline had prompted increased interest from potential customers in an expansion of the DRU, which was designed with a second phase.

He said demand for heavy crude at U.S. refineries on the Gulf Coast is strengthening as supplies from Venezuela and Mexico continue to decline.

The first 50,000-barrel-per-day phase of the DRU project is set to be in service by the middle of this year under a 10-year contract with ConocoPhillips Canada, which owns the Surmont thermal oilsands project in northern Alberta with French partner Total S.A.

Canadian crude-by-rail export numbers have been volatile in the past year, with shipments rising to a record 412,000 bpd in February 2020, then falling to an eight-year low of 39,000 bpd last July.

Rail volumes tend to rise when pipeline capacity is in short supply.

This report by The Canadian Press was first published March 23, 2021.

Companies in this story: (TSX:CP, TSX:CNR)