SACRAMENTO, Calif. (AP) — As both summer and the scheduling of a recall election date loom, Gov. Gavin Newsom wants to make sure Californians know about the cash payments and prize money he is doling out.
Jun 17, 2021 6:32 PM By: Canadian Press 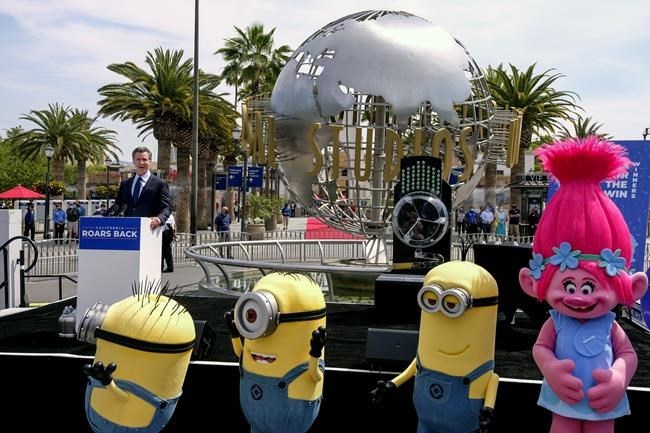 SACRAMENTO, Calif. (AP) — As both summer and the scheduling of a recall election date loom, Gov. Gavin Newsom wants to make sure Californians know about the cash payments and prize money he is doling out.

“Newsom is delivering money to your pocket," a narrator says over a video of a smiling family gathered on a couch in a campaign ad Newsom released Thursday, his first of the recall. It references $1,100 in one-time cash payments he proposed in his state budget.

The spot is one of three now airing statewide on television, though the other two are negative, painting a dark picture of Republicans behind the effort. Their release follows two weeks of Newsom traveling the state as game show host, appearing at theme parks to award millions of dollars in prize money for vaccinations and to celebrate the end of most pandemic-related restrictions.

The celebratory atmosphere mirrors Newsom's growing confidence in his ability to fight off a recall. But some Republicans charge he's wrongly using taxpayer money to buoy his standing and ignoring the state's problems in favor of flashy events.

“It certainly looks like over the last couple days that Gov. Newsom has decided to join the recall circus mentality," former San Diego Mayor Kevin Faulconer, a Republican running in the recall, said in a Twitter video. “What this recall is really about is rolling up your sleeves and fixing our great state."

But the events showcased the advantage Newsom has over his rivals in his ability to generate headlines and get free media.

“I think it is smart to break out beyond conventional political news," said Rob Stutzman, who served as spokesman for former Gov. Arnold Schwarzenegger, who had a taste for headline-grabbing appearances.

“It's not going to play well with everyone but, at large, my guess would be this is probably smart of them," he added.

Amateur Republican political organizers launched the recall drive last year, and missteps by Newsom helped it gather enough signatures to make the ballot. It needs final certification before a date can be set, but that could come within weeks, potentially allowing for a September election.

Many of Newsom's allies believe an earlier election is better before a natural disaster strikes or greatly diminished virus cases unexpectedly surge.

The start of television ads by Newsom and some of his Republican competitors signal a new phase into the campaign, which will turn into a sprint once an election date is on the calendar.

Newsom's positive ad focuses on big spending initiatives in his proposed state budget, which he must sign by the end of the month. That includes up to $1,100 in cash payments to low-income and middle-class people, $4 billion in relief for small businesses and free preschool for all children.

His other ads, one in English and one in Spanish, attempt to tie the recall to extremist Republicans by showing images of people storming the U.S. Capitol on Jan. 6. The English ad calls the recall an “assault on democracy" while the Spanish one references comments by the recall's lead proponent about microchipping immigrants. That organizer, Orrin Heatlie, later said the comment, made on Facebook, was hyperbole and is not something he supports.

Sonja Diaz, founding director of the Latino Policy & Politics Initiative at the University of California, Los Angeles, said Newsom's positive ad presents messaging that will resonate with families and young people who have been hard hit by the pandemic by highlighting the cash payments, help for businesses and an expansion of preschool.

“This is something that I think is really targeted to talk to the policy choices that are going to help younger Californians," she said.

Meanwhile, Faulconer dropped his first campaign ad on Monday, also in Spanish. It paints Newsom in a negative light, highlighting the closure of most schools during the pandemic, the state's struggles to contain homelessness, and the expansion of good behavior credits that could lead to earlier release for tens of thousands of people in prison.

As a heatwave hit the state, John Cox, another Republican candidate, said Newsom wasn't focused on the right issues. The state's independent system operator urged conservation on Thursday but said blackouts were unlikely.

To be sure, Newsom's week wasn't a typical one for a politician. He drew 10 winners of $1.5 million prizes, danced with cartoon movie characters and hopped on a rollercoaster — with TV cameras rolling.

“I think he’s having a ball, I think he’s a little bit more relaxed about the recall," said Sherry Bebitch Jeffe, a professor of public policy communication at the University of Southern California.

But, she said, the image of governor-as-game-show-host might appear too gimmicky for some people's liking. Still, the majority of people are likely to care more about what his actions mean for them than how he presents them.

“It sounded an awful lot like a bribe to me, but I'm not the average voter," she said, referring to Newsom's television ad. She added, “When was the last time you saw anybody, particularly anybody who's hurting, turn down free money?"