TORONTO — Auto sales crashed in April to levels not seen in decades as restrictions and economic uncertainty around the COVID-19 took hold, DesRosiers Automotive Consultants said Friday.
May 1, 2020 4:42 PM By: Canadian Press 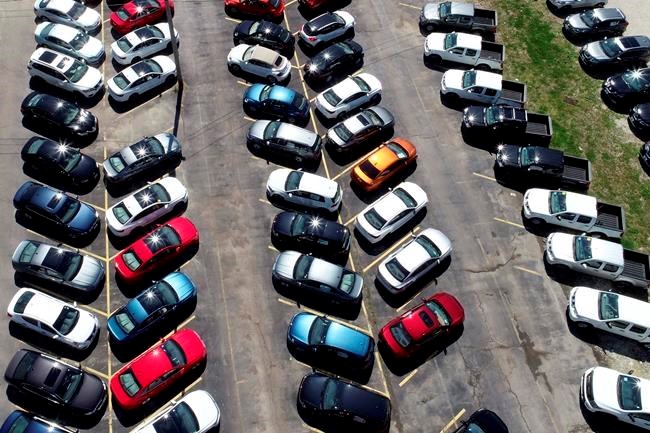 "April brought a further step into uncharted territory with light vehicle sales falling 74.6 per cent from 2019 levels," the consultancy said in a note.

Sales for the month totalled an estimated 45,833 units compared with 180,616 last year. DesRosiers says that while its records aren't complete, it believes the level is the lowest April sales total since 1951.

The April fall in sales came after a 48.3 per cent sales drop in March from a year earlier as restrictions went into place mid-month. Both months easily eclipsed the previous record for a monthly drop of 27.7 per cent set in February 2009. Year-to-date the market is now trending down 36.7 per cent from 2019 levels.

Similar drops in activity are happening in the used vehicle market as well.

Cox Automotive Canada saw a 15 per cent drop in used vehicles financed through its online portal in March compared with last year, while in the first 26 days of April it dropped by 74 per cent, said president Maria Soklis by email.

"April is now showing the full impact of the restrictions put in place to reduce the spread of Covid-19."

DesRosiers notes that April could be the low point in sales as provinces talk of starting to reopen the economy. The Ontario government, for example, announced Friday that auto dealerships could reopen on an appointment-only basis starting May 4.

Other areas of the auto sector haven't changed substantially yet, but could see significant shifts soon.

Jim Matthews, owner of Lease Busters Inc., said he hadn't seen a big increase in people looking to get out of their leases in April as people weren't sure how to react, but that the trend could start to shift significantly in May.

"There's going to be a tidal wave of inquiries and sellers, people wanting to get out of their leases once things ease up."

He said that during the great recession he saw a jump of about 30 per cent of people looking to get out of their leases, and expects something similar, though auto companies have allowed people to defer some lease payments so the effects could be staggered.

Many people may just scale down to more affordable leases, while others will have to get out of their leases entirely, either from financial strain or even because working from home means less need for that second car, said Matthews.

The reduction in driving generally because of the shutdown could mean less market activity overall this year, said DesRosiers in a note.

"With millions staying at home with very little use of their vehicle, the wear and tear on vehicles will lessen significantly, and in the process lower demand across the auto sector."

Less miles travelled means fewer vehicles are scrapped or go into aftermarket and more vehicles still in the system to possibly put pressure on prices.

Rental companies could also create excess supply by being forced to offload some of their fleet as they run low on cash and demand, said J.P. Morgan analyst Ryan Brinkman.

He said the auto leasing arms of Ford and G.M. could also see billions of dollars of losses in the U.S. from the crisis.

TD senior economist Thomas Feltmate said in a report he expects sales down nearly 23 per cent this year to 1.5 million sales, noting that the magnitude of the shock means it will take some time to recover.

"Sentiment has been damaged and it will likely take at least several months before we see a return to a 'normal' … level of sales."