New deals ensure duo will be part of Warriors rebuild into contention over coming seasons
Randy Palmer Jan 30, 2020 5:58 PM
Previous Next
Moose Jaw Warrior general manager Alan Millar and head coach Mark O'Leary.
Expand
When the Moose Jaw Warriors announced that Mark O’Leary would be taking over as head coach earlier this month, general manager Alan Millar made sure to point out that it wouldn’t be long before they’d work out a long-term deal.

As it turns out, Millar wasn’t kidding around.

Less than a month after the coaching change, the Warriors announced Thursday that both O’Leary and assistant coach Scott King had signed multi-year contract extensions with the Western Hockey League club.

“I think it’s an important step with where our team is at, with how young we are and the development of our team over the final 23 games here, everybody knows where Lears and Kinger are in terms of now and in the future of the hockey club,” Millar said on WarriorsTV. “As I mentioned earlier in January, there was no interim tag on Mark O’Leary when we made the decision. Mark was our head coach moving forward, we had to sit down and put some pen and paper together in terms of a new contract. We’re pleased to have that completed in a timely fashion.”

O’Leary is currently in his eighth season with the team, joining the Warriors as an assistant coach for the 2012-13 season. He was promoted to associate coach last season and head coach on Jan. 6, 2020.

“It’s a huge privilege to have this time and this responsibility and it’s one I’m really excited about… I tell my wife, it’s the first thing I think of when I wake up and you do have to pinch yourself once in awhile,” O’Leary said. “It’s a dream job for me, I love junior hockey and I love the community feel of a small city like Moose Jaw and I’m really excited about this opportunity.”

The extension means the duo will be with the Warriors at least through the remainder of the current rebuild and will play the frontline role in returning the team to contention – a consistency O’Leary looks forward to being a part of. 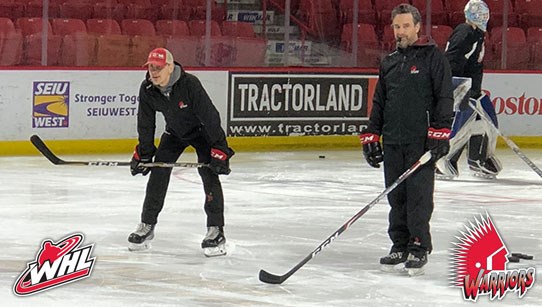 “That’s what makes it special, the relationship that Alan and Scott and I have,” he said. “We’re all on the same page in terms of what we’re trying to build here and that makes it fun to come to the rink every day, knowing you’re all pulling the rope in the same direction.”
King is in his fifth season with the team, joining the Warriors as a skills coach in 2015-16 after more than a decade playing in the Deutsche Eishockey Liga, the top domestic league in Germany. He was promoted to assistant coach the following season.

“It just shows that they’re willing to commit to you and so obviously that’s a good feeling going forward,” King said of signing. “It just kind of gets you set to where you can really dig in and do a good job and give everything you can every day. That’s what it’s all about, making these kids better and we’re going to make sure we’re doing everything we possibly can to get the most out of the guys. It’s a great group and it’s been a lot of fun.”

The Warriors are back in action Friday when they host the Saskatoon Blades before hosting Brayden Tracey, Adam Evanoff and the Victoria Royals for the first time since the trade deadline blockbuster deal on Saturday. Both game times are 7 p.m. at Mosaic Place.