Red Deer pulls away late in win over Warriors

Rebels take control in final frame with three unanswered goals for 7-3 win
Dec 7, 2019 2:34 PM By: Randy Palmer
Previous Next
Moose Jaw Warriors goaltender Adam Evanoff stops Dalloon Melin in close as Cayde Augustine covers the play.
Expand
The Moose Jaw Warriors definitely showed they could play with the Red Deer Rebels in Western Hockey League action on Friday night, but was the finish was a cause for concern.

The Rebels scored three unanswered goals in the third period, blowing open what had been a close back-and-forth game to that point and going to take a 7-3 victory at Mosaic Place.

It was the Warriors’ eighth straight loss, as the youngest team in the Canadian Hockey League continue to attempt to grow through a whole lot of growing pains.

“So there’s lots of work to do there, we’ll watch it and learn from it and be prepared tomorrow for P.A., who don’t give you very much either.”

Three of the Warriors newcomers got into the game quickly, as Kobe Mohr scored his third of the season on assists from Cayde Augustine and Chase Hartje only 3:49 into the contest. Mohr joined the Warriors in a trade with Kelowna on Nov. 24, Augustine in a trade with the Rockets on Dec. 2 and Hartje off waivers from Brandon on Dec. 4.

That set the stage for a flurry of goals midway through the frame, as Josh Tarzwell tied the contest at 7:48, Owen Hardy gave the Warriors a  2-1 lead at 9:54 and Keaton Sorenson again tied the game for Red Deer just under two minutes later.

Dallon Melin gave the Rebels their first lead of the game midway through the second before Augustine scored his first as a Warrior on the power play with 1:47 remaining in the period. 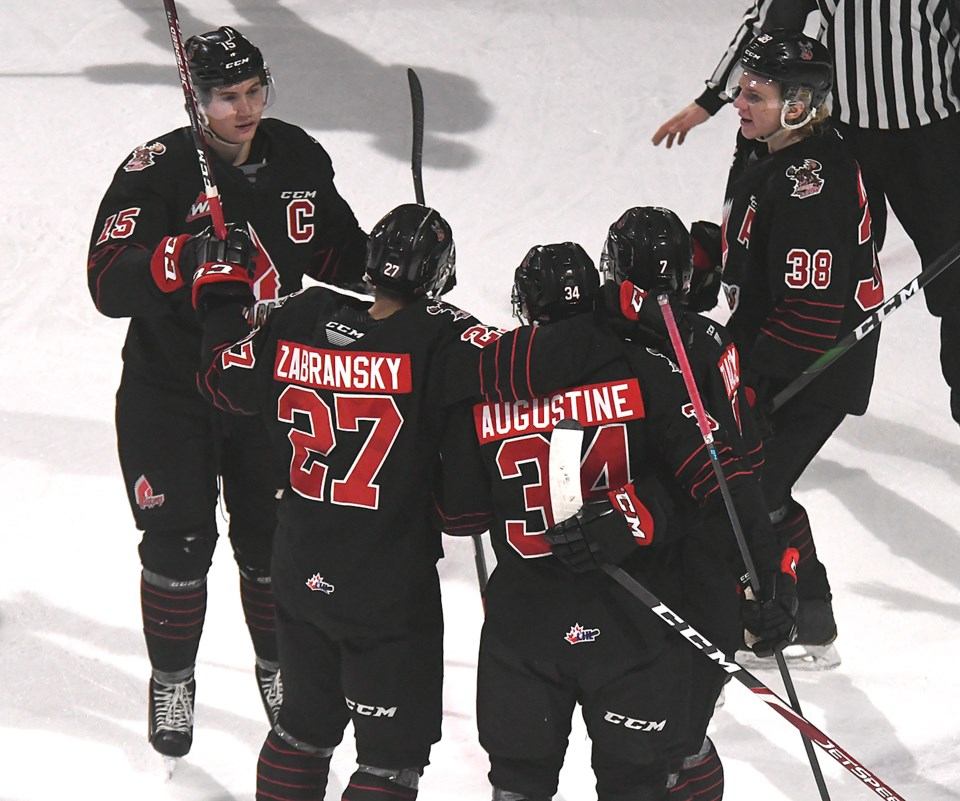 The Warriors celebrate Cayde Augustine’s first goal as a member of the team.

“It’s tough losing, we lost a couple of games in a row here and that’s not as fun and not what we want,” Augustine said. “Scoring a goal and getting an assist is nice, I’m not going to complain about that, but I think we need to get some rest and get ready to go for the next couple games here.”

The tie wouldn’t last the second period, as Arshdeep Bains scored on the power play 30 seconds after Augustine’s marker.

That set the stage for the third, where Dawson Barteaux and Ben King scored for Red Deer before Bains wrapped things up with an empty netter.

Making the loss that much tougher to take was how close things were early, and how as the game progressed old bad habits started to take their toll..

“When they apply themselves and we follow the plan, it works,” Hunter said. “But we get away from the plan, we don’t come to the puck, we try and make rink-wide passes coming through the neutral zone, they track hard and those passes get taken back into our end… we just have to play the game more consistently and play around pucks harder.

Adam Evanoff turned aside 28 shots in taking the loss, Byron Fancy had 18 saves for the Rebels.

Moose Jaw fell to 9-15-1-0 on the season and now sit four points back of Red Deer for third in the Eastern Conference wild card standings.

The Warriors are back in action Saturday night against the Prince Albert Raiders. The game is the annual Teddy Bear and Toque Toss Game, with fans asked to bring a new toy or toque and mitten in a plastic bag and throw them on the ice after the Warriors first goal. All toys will be donated to the Salvation Army for their annual Christmas toy drive.