Popple, Tracey, Hunt, Korczak to serve as assistant captains
Nov 29, 2019 3:00 PM By: Randy Palmer
Previous Next
The Moose Jaw Warriors announced their leadership group on Wednesday, with Owen Hardy named the 33rd captain in team history, Tate Popple, Brayden Tracey, Daemon Hunt and Ryder Korczak all named assistant captains. (provided)
Expand
The Moose Jaw Warriors took their time when it came to choosing their leadership group this season, but when they did make the decision, it was all about heart and character.

The Warriors announced Thursday that Owen Hardy would be the 33rd captain in team history, with Brayden Tracey, Daemon Hunt, Ryder Korczak and Tate Popple all serving as assistant captains.

“It’s just a huge honour,” said Hardy, who succeeds Josh Brook wearing the ‘C’ for the Warriors. “I’d just like to thank the coaching staff and everybody who trusted me to take up this role. The biggest thing for me is I like to lead by example, be a good teammate, work hard and make the jersey and the team proud.”

In making the announcement, Warriors head coach Tim Hunter explained what the coaching and management staff were looking for in their on-ice leaders, focussing on four areas that included having fun and enjoying being a part of the team; being competitive and leading the way regardless of circumstances; being compassionate, caring and respecting both teammates and people in the community and being mindful of what’s happening, paying attention to teammates and being there if anyone needs support. 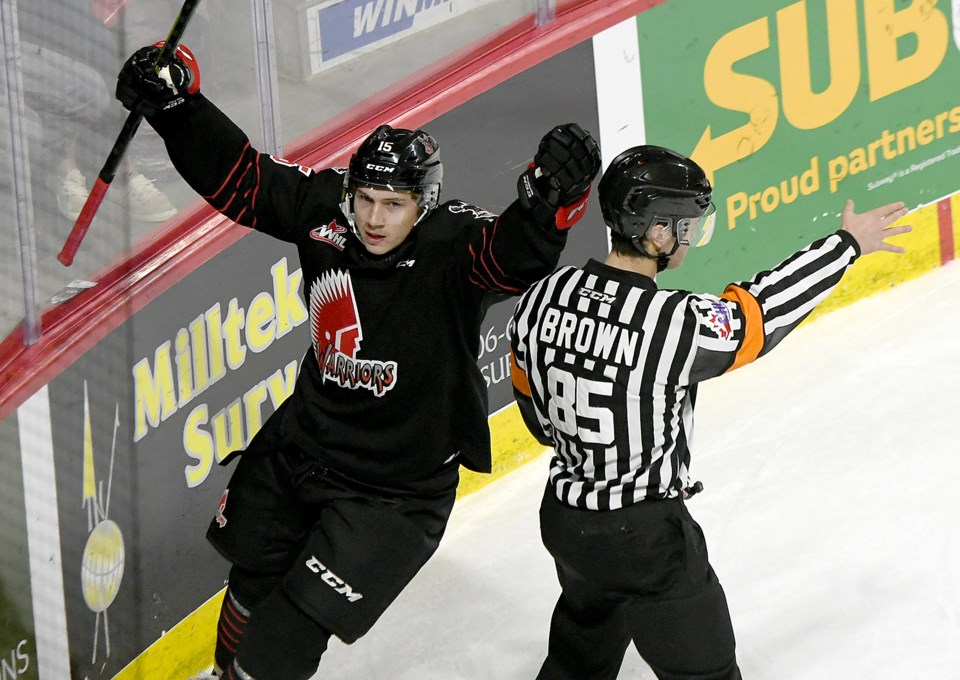 Owen Hardy celebrates his first goal in a Warriors uniform.

“These guys, in our mind, represent those four qualities and then some,” Hunter told the team. “You want direction, watch how they practice, watch how they work in the gym, how they carry themselves on and off the ice.”

Hardy, one of two overagers on the Warriors, joined the squad at the beginning of October after playing the previous four seasons with the Vancouver Giants. The Nanaimo, B.C. product has nine goals and 13 points in 20 games this season.

As the newest Tribe captain, Hardy plans to continue the same style of play that landed him the captaincy in the first place.

“Just show up to the rink every day with a good attitude and try and be the hardest worker every single day and be a good example for the guys,” Hardy said. “We have a young team the more we can lift each other up the better… It’s a great group of guys so they’re going to make my job easy.”

The Warriors are back in Friday night when they host the Medicine Hat Tigers. Game time is 7 p.m. at Mosaic Place.