Canadians roll to 10-0 mercy-rule win, Giants hold on for 6-5 win in nightcap
Jul 31, 2020 4:16 PM By: Randy Palmer
Previous Next
1 / 1 Jay Livingston fouls off a pitch in the fourth inning… and one offering later, would hit a grand slam over the centre field fence.
Expand
Previous Next
On hot night with little wind, the Moose Jaw Canadians apparently wanted little to do with playing a whole lot of ball on Thursday evening.

Facing the Little Black Bear Blues in Rambler Park Fastball League action at Lyle Helland Ball Diamond, the Canadians scored four runs in the first inning and never looked back on their way to a 10-0 victory.

Things were far closer in the night cap, as the Moose Jaw Giants took an early lead and hung on for a 7-6 victory over the Blues.

The Canadians improved to 6-1 on the season and continue to hold down first place in Division 1, while the Giants improved to 4-3 and sit in fourth place.

Both teams are back in action Tuesday night, as the Canadians take on the Regina Gold in the early game and Giants face the Golden Hawks in the evening contest.

Jay Livingston provided the big hit of the game, lacing a grand slam over the centre field fence as part of the Canadians’ five-run fourth inning that invoked the mercy rule.

By that point, the local squad had things pretty much in hand, courtesy of a solid start from Blake Dixon, who allowed a single hit while striking out six in taking the win.

“We got started early, so that makes it tough on the other team,” Livingston said of the Canadians’ quick 5-0 lead. “You’re constantly putting pressure on them, and then Blake throws a great game, it’s tough to lose when your pitcher throws up zeros. That was the biggest thing, and then when you get baserunners and get an opportunity, it just all worked out.”

Livingston finished the game 2-for-3 with five runs batted in while Kent Barber went 2-for-3 with a run scored and an RBI. Sean Lougheed and Bryce Crosbie each scored a pair of runs.

Darian Bellegarde pitched for Little Black Bear and also had their lone hit.

It’s been as solid a start to the shortened season as the Canadians could have hoped, and they’ll look to keep things going against the winless Gold.

“We play good defence and obviously we have good pitching, so we just score enough to get it done,” Livingston said. “Obviously tonight we were on it, and with the pitching we have, if we play good defence we’ll win more than we lose…. Every team is good, you’re going to catch teams on bad nights once in awhile but we know we’re going to have to play well every night.” 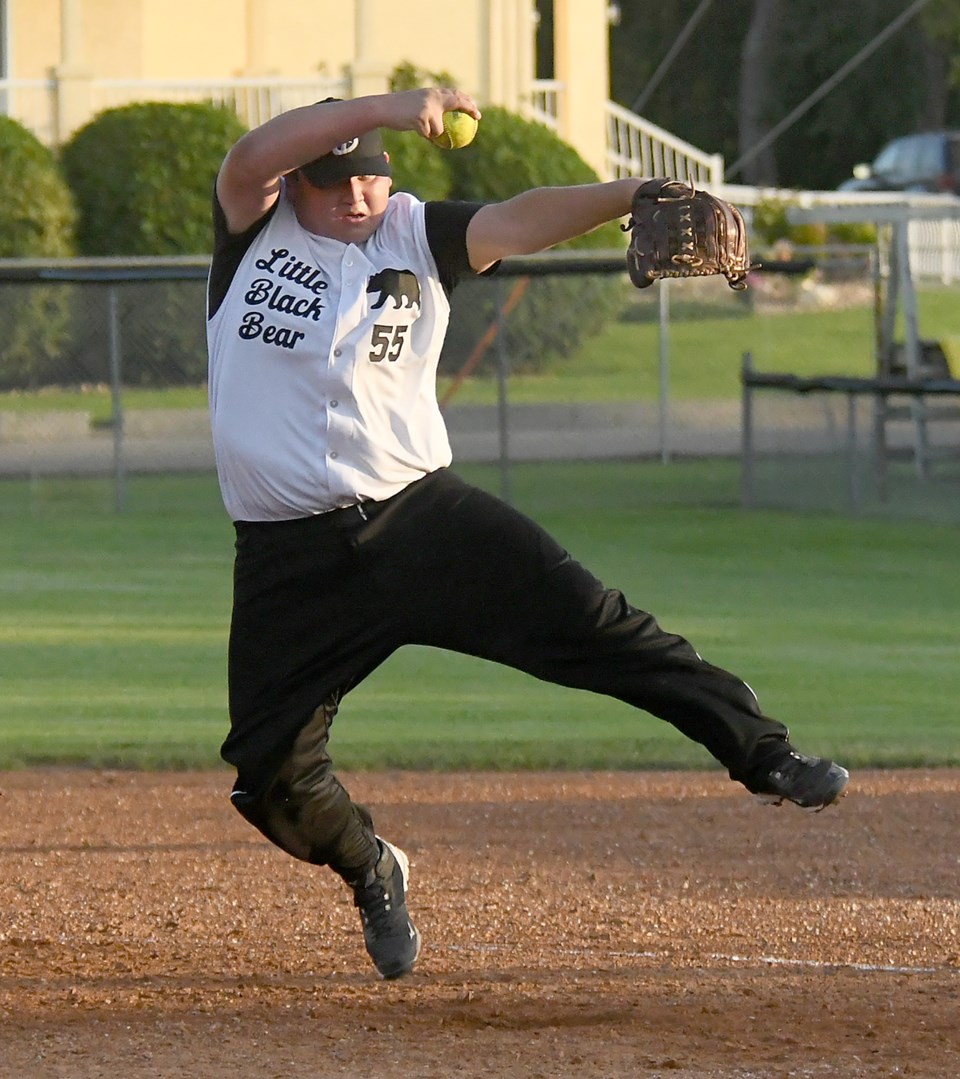 Tyler Kifferling hit a one-out triple in the bottom of the sixth and scored on a single by Kevin Knelsen, and Al Muhle retired the Bears in order in the seventh to give the Giants their one-run win.

It didn’t take Little Black Bear long to score their first run of the evening in the opening frame – Gilbert Bellegarde hit a lead-off single and came around to score and was followed by Mickey Lavallee with a two-run home run a couple of batters later.

The Giants were quick to respond, though, putting up a four-spot of their own in the first, keyed by a two-run home run by Kifferling. All told, he’d finish with three runs scored and three RBI on the night.

Each team scored a run in the second, and the score would remain 5-5 until the sixth.

Derek Ross got the start for the Giants and allowed five runs on four hits and a pair of errors before giving way to Muhle, who allowed a single baserunner the rest of the way, striking out seven.

Bellegarde was back in the circle for Little Black Bear and would give up the six runs on nine hits while striking out 10.