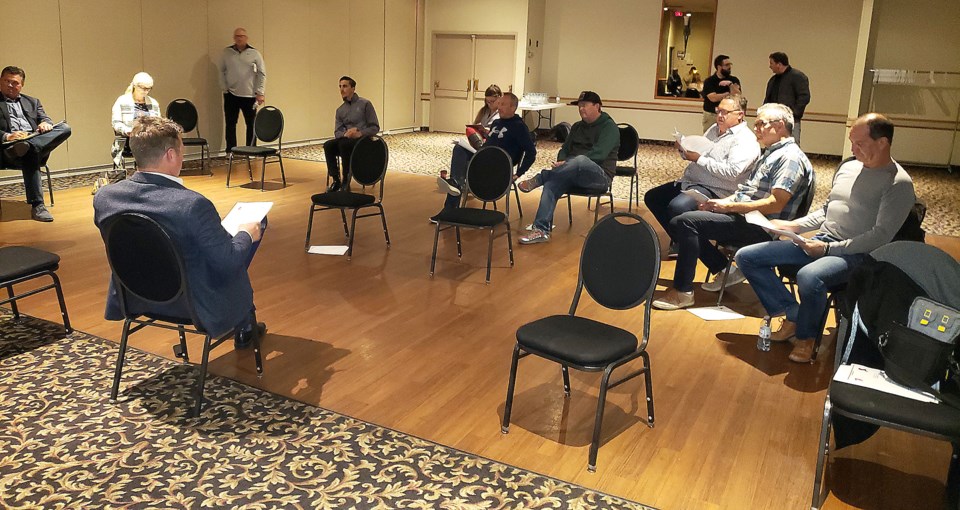 The Moose Jaw Warriors annual general meeting looked far different than past years.
The Moose Jaw Warriors might have endured one of their largest single-season financial losses in recent history during the 2019-20 season, but the team remains in solid shape despite a host of difficulties brought on by the COVID-19 pandemic, the team revealed during their annual general meeting on Tuesday night.

The event itself was unique in that only around 20 board members and team staff took part due to pandemic restrictions, gathering in a school-boy circle in front of team president Chad Taylor. All told, the proceedings lasted about 15 minutes.

Taylor didn’t try and spin gold out of straw with his assessment the team’s situation, which saw the Western Hockey League franchise show a loss of $391,299 for the fiscal year from June 1, 2019 to May 31, 2020.

“The year is what it is,” he said. “We know what the hockey team was like, we knew it was a rebuilding year. We walked into that knowing it was going to be a challenge regardless. Then COVID hits, we lose three games, we finished off a legal lawsuit with the CHL, there’s no good news, it’s ugly.

“We’ve been given that shock to the financial statement in the club, but the good news is we’re strong, we can get through this and we’ll be better when hockey returns to normal.”

The numbers are stark.

The Warriors showed a net revenue loss of $309,563 through team operations, of which $282,286 was attributed to pandemic-related lost revenues. That includes the aforementioned three home games when the WHL season was cancelled in late March.

Another major hit came from the WHL settling a class-action lawsuit regarding player pay, which resulted in a $180,846 hit.

With the losses, the Warriors elected to defer their $200,000 Multiplex pledge commitment, which would have been the ninth of 10 payments.

Now for a bit of good news.

Even with things as rough as they are, the Warriors are still in good shape financially -- the team has a bank balance of $610,653 and their education fund remains well stocked with $154,167 -- thanks in no small part to the annual Alumni Golf Tournament, which brought in $99,583 last summer. All told, 16 former Warriors activated their education fund this season, and the team paid out $98,501 for post-secondary academics.

The hard work of the Warriors Booster Club helped offset some of the damage, too, bringing in $238,771 during the 2019-20 campaign.

“We’ve had such great support over the last 10 years, the team is in good shape,” Taylor said. “We’ll take measures to make sure this franchise does not have a cash problem and saying that, I’m going to be looking for that support when the puck drops. We’ll need the help of the community when we get going again and hockey will look different, our staff will look different, we’ll be leaner, but that is the times and we’ll make it work.”